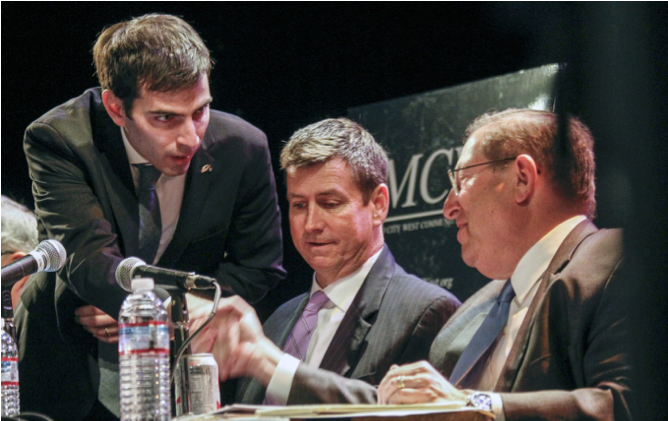 ELECTION WATCH--One of the most competitive Los Angeles City Council contests that voters could decide next week pits the incumbent against two challengers – one with a large campaign war chest to leverage. (Photo above: Jesse Creed, Mark Herd, Paul Koretz, candidates for LA’s CD5)

Councilmember Paul Koretz is running for his third term representing District 5. Covering communities like Bel Air, Encino, Hollywood and Westwood, the district is among the wealthiest and well-educated among the council's 15 represented areas.

Koretz' challengers are Mark Herd, who has been active in several community groups and is the founder of the Westwood Neighborhood Council, and attorney Jesse Creed.

Among the challengers in the eight City Council contests on Tuesday's primary election ballot, Creed is the top campaign fundraiser, with the exception of one candidate running for the open District 7 seat in the San Fernando Valley.

Creed has collected about $298,800 in contributions, as of the latest filling deadline, but is trailing incumbent Koretz who has about $440,300 in contributions. Both Koretz and Creed also accepted public matching funds. Herd has not reported any fundraising.

Creed claims he's gained significant local support by walking the district's neighborhoods. He said he has spent three to five hours a day since December knocking on doors.

"Our donation base comes from individuals, people with a pulse, not PACs, corporations or LLCs. And it comes from people who live in and around the city," he said.

Koretz points toward accomplishments like helping to save the Century Plaza Hotel, boosting code enforcements and his work on environmental issues. He is well-known as an advocate for animal rights and worked to outlaw declawing cats and puppy mills in Los Angeles.

For his next term, Koretz said he'll be able to get more done for constituents thanks to funding improvements, a reference to improved city revenues since the recession.

Creed promises he will only be beholden to voters and he's taken a pledge not to accept any money from developers or lobbyists.

"I will be an independent voice for the neighborhoods, for residents, for the basic issues that people care about on a day-to-day basis," he said.

Koretz dismisses Creed's charges that the incumbent is beholden to developers. Koretz took heat for his handling of the developer Rick Caruso's high-rise residential building project located across from the Beverly Center.

The Los Angeles Times reported that Koretz received $2,200 in donations from Caruso. After the story ran, Koretz removed his support for the project, and then ultimately restored his support after Caruso lowered the project's height by 55 feet.

Koretz told KPCC "it didn't turn out perfectly." He said he'd intended to remove his support for the project all along unless it was shortened, but was motivated to act faster when the Beverly Wilshire Homes Association held a press conference to voice strong opposition to the project.

"At the end of the day, I think it was the right compromise," Koretz said.

He called Creed's campaign "the most shockingly negative" that he's ever seen.

"Every developer in town knows I've been their worst enemy," Koretz said. "The idea that contributions have made me any less independent, I think, is absurd."

Despite the Caruso project controversy, Koretz was among five incumbent City Council members endorsed by the Los Angeles Times. The newspaper praised him for caring "deeply about his district and his constituents" and for making himself available to them.

On the other hand, the Los Angeles Daily News endorsed Creed, noting his work as an advocate for homeless veterans and what it described as his broad knowledge of district issues.

If no candidate reaches the majority threshold of 50 percent of voter support plus one vote in the primary, then the top two vote-getters will move on to the general election on May 16.

Voters who are still undecided on the District 5 race can check out KPCC's candidate survey, which features the candidates' backgrounds and answers to campaign questions.

(This analysis was posted originally at KPCC radio.)