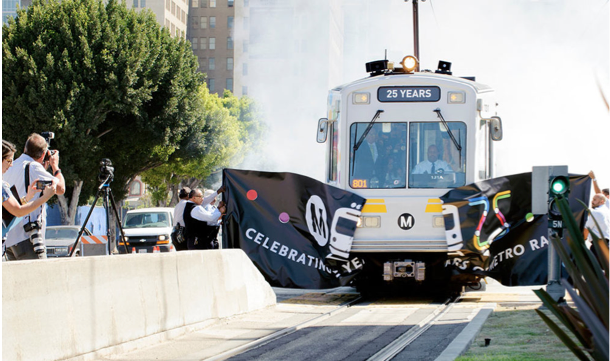 ALPERN AT LARGE--Some of us obsess about President Trump.  Some of us obsess about the Oscars.  And then some of us focus mainly on the day-to-day challenges of our jobs, families and neighborhoods ... which is one of the main reasons we should know when government has OUR backs because they demand their own political and fiscal loyal from US.

Well, let's give credit (both favorable and unfavorable) where it's due.  It's only fair, right?

My last CityWatch article was supportive of Metro, yet complained about travel time and safety/security problems.  Metro DOES listen, and hence it's out of support that I point out their problems ... because they DO strive to do better for their taxpaying, farepaying constituents.

So imagine my surprise when--on the same day I submitted my last article--it was announced by Metro that both delays/travel time and increasing security were to be addressed for the Metro Blue Line.

In other words, Metro "gets it".  Operations and quality of "the ride" means something to them. A speedier and safer ride makes for better ridership, of course.  So Metro won't be turning a blind eye lest its ridership plunge more now that gasoline prices are overall lower (and the economy is doing sufficiently better to allow riders a choice between traffic and Metro).

Bigger-ticket items includes grade separation of its light rail lines, and/or signal prioritization, but for now the option of more trains and careful operations at the shared portion of the Blue and Expo Lines is do-able, and do-able right now.

Similarly, the use of multiple police forces to replace the LA Sheriff's Department (using the LAPD and Long Beach Police Department) is long overdue.  The creeps need to be limit-set (and they are very much present), and the law-abiding and vulnerable need to be protected.

It's delightful when government listens!

Yet it's awful when government does not listen, or actually preys upon the general population that begs for honest representation.

So many efforts on the part of the City Council to provide lip service to those grassroots Angelenos forming a small army to pass Measure S begs the question:  if we hadn't finally howled for Downtown and the Planning Politburo to obey the laws on development, zoning, and the environment, would they ever have done it on their own?

The Los Angeles Times editorial board can "piss off" because they've overseen a diminution of the economic growth of the City of Los Angeles while favoring overdevelopment and law-breaking to the detriment of all law-abiding, compromising, and civic-minded Angelenos who were open-minded ... but not OK with being abused.

And the LA Times editorial board (not so much its reporters, who work hard to reach out to the citizenry), with its contemptuous approach towards those who are wanting the City to obey its laws, should be ignored on its merciless attacks on those promoting Measure S.

The Times has for too long been an offshoot of bad-behaving government and they've earned the right to have the rest of us vote "opposite to what the Times says".

Worsening this is the role that Sacramento has played in promoting overdevelopment no matter what law-breaking is needed to do that environmentally-harmful activity.

And if cities and counties want to be sustainable and live within their means with respect to growth, infrastructure, environmental sustainability, etc.?  Well along come childish jackasses like Assemblyman Miguel Santiago to make it harder for slow-growth measures?

And gone are the days when Governor Jerry Brown gave a damn about the environment and the law.

Attacking those volunteers who are promoting Measure S just to save the livability of LA for its residents ... sure.  Way to go, Guv!  Are you "progressively" losing your soul or just out of touch with those of us still in tune with ... the law?

So let's give credit to Metro and any other branch of government that listens, and cares, and works for the people.  As for those who collectively hurt us?

Well, you'll get your own credit, too--but not the kind that you'd probably like.  But hey ... you've earned it.

(Kenneth S. Alpern, M.D. is a dermatologist who has served in clinics in Los Angeles, Orange, and Riverside Counties. He is also a Westside Village Zone Director and Board member of the Mar Vista Community Council (MVCC), previously co-chaired its Planning and Outreach Committees, and currently is Co-Chair of its MVCC Transportation/Infrastructure Committee. He is co-chair of the CD11 Transportation Advisory Committee and chairs the nonprofit Transit Coalition, and can be reached at [email protected]. He also co-chairs the grassroots Friends of the Green Line at www.fogl.us. The views expressed in this article are solely those of Dr. Alpern.)