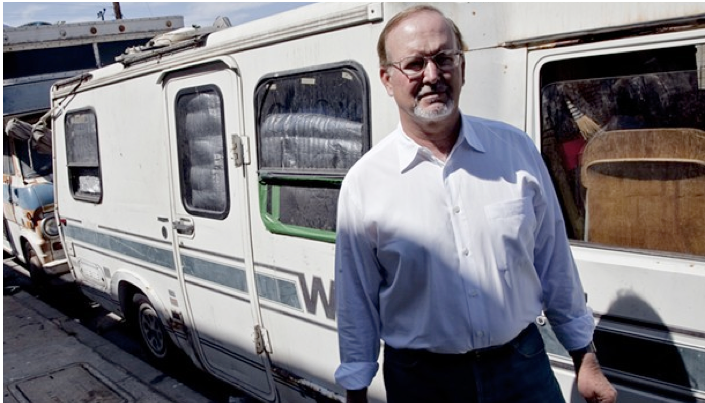 VENICE VOX-We are a contingent of Venetian neighbors, business people, property and home owners, renters, political representatives and social activists, as well as constituents of the disenfranchised who up to now have had no united voice.

The existence of Publius owes itself to one common cause: our vehement opposition to the candidacy of Mark Ryavec (photo above) for the 11th District seat on the LA City Council.

There are countless reasons to reject Ryavec: restraining orders for stalking; numerous landlord and rental violations; abhorrent ad hominem attacks on anyone disagreeing with his extreme, controverted views; fostering fake health scares throughout Venice; various instances of vicious cyber-bullying; and always, criminalizing those suffering from lack of shelter (Apparently, Ryavec’s privileged upbringing and subsequent inheritance left him devoid of empathy for those less fortunate than he.)

While the Beachhead cartoon of Ryavec as an SS Commandant overseeing the homeless as they enter the gas chambers is admittedly risky satire, it nonetheless accurately encapsulates the lack of feeling Ryavec displays towards those in most need of society’s alms. In Ryavec’s eyes, however, the powerless and marginalized, “can do anything they want with impunity,” leading to his dystopian vision of a Venice where streets are currently choked with “hundreds of individuals” immersed in “harassment, intimidation, trespass, vandalism, home invasions and burglaries.” Venetian Carnage -- to coin a phrase.

This deprecating, sordid and false impression is antithetical to the views and sensibilities of Publius. While our community has many problems, Venice is not a war zone teeming with violence-prone indigents running roughshod throughout the neighborhoods sans restraint. Ryavec’s toxic vision is simply a scare tactic – prejudicial, hyperbolic, alarmist images are Ryavec’s political bread-and-butter.

This is a primary reason we oppose Mark Ryavec for city council: governing implies bringing residents and neighborhoods together for the common good. Ryavec’s recurrent motive, on the other hand, is always singular and specific: what will best profit Mark Ryavec? His unscrupulous, self-centric purposes make him dangerous; this also explains his unrelenting willingness to stoop as low as possible in furthering his rapacious desire for power and advancement.

Overtly obtuse about facts and objective reality, Ryavec nonetheless weaves a fine figure -- sometimes in interviews or in person -- that only makes him more dangerous! He’s an educated man who comes off calm and rational and always articulate in his harsh abasement of his enemies and the disenfranchised. Heck, he often makes it sound like he’s concerned for the souls he actually despises.

Sullen and morose by nature, Ryavec’s peevish disdain for humanity at large reveals itself once you listen carefully. Just lift the rock and look under it. Scrape off the prosaic patina and you will see past the faux grin that is rounded by a caterpillar moustache. This is when you will witness Ryavec’s rabid, petty intolerance for the unhoused, his vitriolic belittling of his many enemies, his vulgar political tactics and the promiscuous power he craves for his own self-aggrandizement.

Publius does not want Ryavec to receive more attention than he is due. We don’t want to give his deluded, self-serving candidacy any more ink than it deserves. But for the welfare and interests of our Eleventh District, we respectfully ask the voters in our community to vigorously reject this most undeserving of candidates.

Ryavec’s constant verbal dreck -- where fungible facts masquerade as concern for the community -- is a political Siren Song. Only deluded faith or willful ignorance could elect such a person to the city council. While serving his moneyed masters, Ryavec may cause the trains run on time, but make no mistake: his epicurean tastes too closely match the whiff of Weimar wafting from Washington. We must not ignore the fatal cancer of this candidacy for city council.

A final note. Since Ryavec serves as a mouthpiece for the secret cabal of wealthy residents calling themselves the Venice Stakeholders Association (answerable to no one,) we have this to say: when the VSA reveals the names of its membership, we will make known the names of the many residents, business people, activists and other constituents who make up Publius.

Until then, the election of Mark Ryavec would be a disaster for the 11th District. We urge you to VOTE NO and stop his cynical run for the Los Angeles City Council.

(Publius is a group of Venetian neighbors, business people, property and home owners, renters, political representatives and social activists, as well as constituents of the disenfranchised who up to now have had no united voice.) Edited for CityWatch by Linda Abrams.