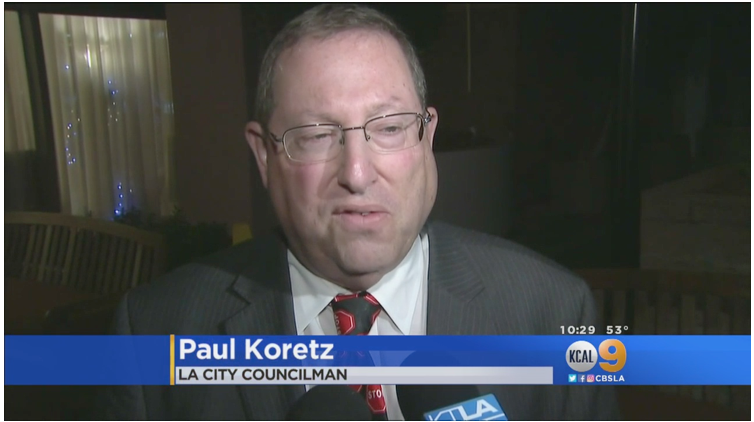 THE REAL WORLD--I've had enough of CD 5 Councilman Paul Koretz. I can't be spun by his niceness, anymore. And, I'm sick of hearing him say, 'Perhaps we should consider, at some time in the future, entertaining the notion of pursuing this matter with further discussion, possibly leading to a study, in the future; before we move ahead." (Way to take a stand, Paul! The softest community stiff-armer, in the horseshoe.)

There are two other candidates running against Paul "Korrupt" Koretz, in the March 7th election: Jesse Creed and Mark Herd. Jesse has a lot of money raised; and Herd is the only #YesOnS candidate in the CD 5 election. Get out the word, to get out the vote; for one of these two candidates. We must take Koretz and replace him to show City Hall that enough community backstabbing is enough.

As you probably know, the LA Times did an article exposing all the money that billionaire developer Rick Caruso was spreading around City Hall to get his 20-story mixed-use, mega-project approved for the Beverly Center area, where average (big) building height is 8 stories.

Of course, Paul Koretz was on Caruso's payroll, as was LA Mayor Eric Garcetti, to get this project, out of scale and character of the community, approved.

After the LA Times article, Koretz came out against the project. But, here’s how the game is played: ask for a little more than you know you can get ... then say, "Well, we scaled back the project, and I am now for it." Guess what. Caruso offered to cut 3 stories off the project and Koretz said “I am now for it.”

Koretz can hide behind scaling it back from 20 stories to 17 stories; but the people weren't against the project over the 15% reduction of something that is completely out of scale and character for the area.

Just because Caruso wants to jam something into the area for his portfolio doesn't mean the community wants to jam up the neighborhood with another shopping plaza of stores and restaurants for tourists.

And there is big citywide outrage over the exposure of how Carsuo buys off elected officials to do what he wants; with the pay-to-play type donations he makes to Koretz, Garcetti and others.

Q: Did Paul Koretz and Eric Garcetti give back the money they took from Caruso? A: NO!

Does reducing it three stories, when they always ask for more than they expect; and reduce it down in the negotiation ... I'm pretty sure this was a back room deal all along. ("Yeah, we'll ask for 20 stories, then cut it down to 17.")

The Caruso project should have its own district and councilmember. Is EMS/Fire/Police going to be able to staff up for increased demand this project will be placing on city infrastructure? Traffic is so gridlocked in the area this is certain to increase response times; for emergencies across the community. (Like when elderly call for ambulance; or you call for fire response.)

I know some people are unsure about Measure S. They think it goes too far.

But, Garcetti, Koretz, Council and the developers who run them have proven they are out of control, corrupt, pay-to-play maniacs who can't stop themselves, like any addict. Replace Koretz with one of the other two candidates on the ballot in his race.

The problem isn’t the Koretzes of the city, it’s the people who keep voting for them. Look in the mirror. Do the right thing.

(David (Zuma Dogg) Saltsburg is a candidate for Los Angeles mayor. He has been a community activist in Los Angles for more than 10 years successfully taking on City Hall on numerous occasions. Learn more here.)