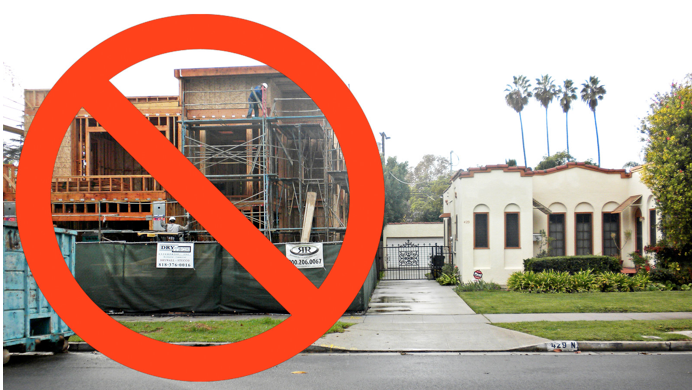 SNAPSHOT ANALYSIS—(Here’s what David Zahniser reported in the LA Times on Thursday: ‘Spurred by years of complaints from neighborhood groups, the Los Angeles City Council voted Wednesday to seek new restrictions on “mansionization” — the practice of constructing houses that are far larger than those nearby. On a 13-0 vote, lawmakers asked City Atty. Mike Feuer to rewrite sections of two city ordinances that regulate the size of new homes in single-family neighborhoods and in hillside areas.’ We asked our ‘mansionization’ expert, Shelly Wagers, to make sense of what happened and answer the question: Is the McMansion Crisis now over? Here’s how she capsulized it:

Big picture, the Council took quick and decisive action yesterday to get amendments to the mansionization ordinances back on track.  Councilmember Koretz has shown consistent leadership on the issue, Councilmember Ryu continued to deliver on his campaign promises, and Council President Wesson, who had kept his powder dry on this one, stepped up big-time to sponsor the Motion the Council voted on yesterday.

As they now stand, the amendments go a long way towards addressing the failures of the existing ordinances. The ratio used to set basic size limits is far more sensible, many self-defeating bonuses have been eliminated, and most hillside-specific issues like grading and hauling have been resolved.

Only one issue remains troubling:  Front-facing attached garages.  Because they are uniquely damaging and because counting space within the walls is an eminently reasonable way to calculate the size of the structure, we would have liked to see all the square footage of front-facing garages count floor space.  Instead, 200 sq feet will remain uncounted.  The concern is not the 200 sq ft per se, it is rather that this “freebie” continues to incentivize (or at least reward) a singularly unfortunate design feature.  (For reference, I’m attaching the text of my comments on this point at yesterday’s hearing.)  It’s not clear at this time whether or not we will have an opportunity to tighten this loophole.

BIG thanks to CityWatch, by the way, for providing the most consistent coverage of this issue of any media outlet in the region. The Council would never have taken action without strong pushback from homeowners and residents all over the city.  Activists deserve tremendous credit for forcing the issue.

I’m Shelley Wagers from Council District 5, and I thank you for making mansionization a priority.

The original Motion this Council adopted to amend the BMO identified attached garages as a uniquely damaging loophole.  Here’s why:

Attached garages add 400 square feet of bloat to a house.

They eliminate the buffer that a driveway provides.

They disrupt the look and feel of many LA neighborhoods.

Excluding attached garages is like weighing yourself with one foot off the scale.

No one is asking you to prohibit attached garages.  But they must count as floor space.

(Shelley Wagers lives in the Beverly Grove neighborhood and has been involved in anti-mansionization campaigns in Los Angeles for over a decade.)