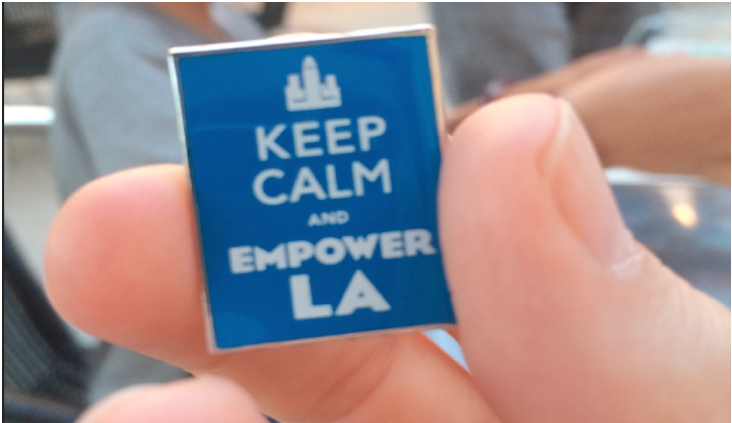 15 CANDLES, 96 POINTS OF LIGHT--(Editor’s Note: This month marks the 15th anniversary of the certification of Los Angeles’ first Neighborhood Council. CityWatch is celebrating with a multi-month celebration of introspective articles and view points on how LA’s Neighborhood Councils came about, how they’re doing and how their future looks. This perspective by Tony Butka is just such an effort.)

The December LANCC meeting was a free-wheeling event, going over past successes and generally talking about Neighborhood Councils and what they’ve become -- and shrunk into. One of the good things discussed was the fact that there are a lot of new faces in our neighborhood councils after the last election.

Of course the flip side of these changes is the loss of institutional knowledge about the Neighborhood Council System. This reality, coupled with the observation that some of the “old timers” view of “how things should be” is not particularly useful to new Board members, prompted this piece.

For context, back in August 2014, I wrote in CityWatch about the systematic marginalization of the City’s Neighborhood Councils.

Here is a more succinct comparison of how the NC System started out vs. what it has become in 2016.

Back then, DONE, the Department of Neighborhood Empowerment, had over 60 employees to help the Neighborhood Councils live up to their mandate; now there are around 20 on the staff, and it’s been as low as a dozen.

Then, DONE staff helped the NCs do their own thing and learned together with the Neighborhood Councils; now the current staff has high turnover, don’t really know what they are doing, and keep reversing their “advice” after they go back and check with the Mothership DONE.

Then the General Managers job was to provide support for the Neighborhood Councils, including providing them with meeting space and ongoing help; now the General Manager is simply a cheerleader for the Mayor, bouncing around doing his bidding. Just check out one of the recent email blasts.

Then, BONC recognized their role as helping the NCs in establishing boundaries and helping with elections; now, BONC acts as an alien Mothership, telling the NCs what they can and cannot do.

Then, the City Attorney rarely offered legal advice, and when they did, it was in writing with file numbers on it; now, the City Attorney doesn’t even bother to give advice in public, instead hiding behind a bogus ‘attorney-client privilege’ theory to cover up the fact that their so-called legal advice will not stand up to the light of day. Check out this one.

My Friends, It is Time to Reinvent the Neighborhood Council System.

By way of feedback from newer Board members, there seem to be at least two areas that drive them nuts. First, is all that Ralph M. Brown Act stuff and what they have to do to comply with it that takes forever. Second, was all of the time it takes to handle items that involve spending money. Between these two issues and the DONE staff telling them what they can and can’t do, Neighborhood Councils are hard pressed to get any real Neighborhood Council things done in the space of a meeting.

Fair enough. So here are some practical suggestions.

Regarding the Brown Act, the only really big deal here is that you do have to post agendas at least 72 hours in advance of the meeting. These days that usually mean: (1) electronic posting and (2) physical posting. While the DONE requirement of canceling the meeting is not technically correct, don’t bother to fight City Hall on this one. Hint - make the posting place very handy for most of the Executive Committee.

Regarding DONE’s other Brown Act “advice” on what you can and can’t do regarding a specific agenda item, you can do your thing and ignore DONE. Truth is, before anyone can do anything to a NC on these kinds of alleged violation, it can be fixed -- if indeed it really needs to be addressed at all. Here’s what the First Amendment Coalition has to say on the matter:

“Sending a cure and correct demand letter is only appropriate when an action has actually been taken that needs to be corrected. In other words, if the Brown Act is violated yet no action was taken, then a cure and correct demand letter would not be sent. Rather, a person would turn to the courts for an order preventing future violations or would ask the district attorney to do so.”

As far as I know, nobody has ever taken a Neighborhood Council to court. So, if DONE or a rep says you can’t or shouldn’t have done something, first tell them to give it to you in writing. They will have to go back to the Mothership and figure it out before deciding if they were actually right. Furthermore, unless it’s something of the magnitude that would require a cure and correct letter, who cares what they think?

Along those lines, if you do something that excites DONE enough to have the City Attorney send you a “confidential attorney client” email, read it out loud in public at your next meeting. The City will tell you that if you waive the privilege and do this, you could be personally liable for litigation. Don’t believe a word they say. First, Neighborhood Councils are advisory only by statute, and hence there’s not much they can do that would expose anyone to litigation. Second, in the entire history of the Neighborhood Council System, I am unaware of any Board or Board member having ever been sued by anyone, except for one guy back in the day that stole money. The current City Attorney advice is just unethical intimidation.

So much for the Brown Act and wasting a bunch of time catering to DONE instead of doing what you were elected to do -- outreach and keeping the politicians honest. Another suggestion that came out of the LANCC meeting that I like, was to use a Town Hall format for anything other than the minimum legally required Board meetings and simply avoid the Brown Act totally.

Most Neighborhood Councils get tied up in knots over trying to expend the money that they get. Our own Glassell Park Neighborhood Council spent almost a whole year with their funds blocked because of a screw up by DONE itself. So, here’s some hard won wisdom.

First, make sure everyone has taken the Funding Training that DONE requires, and then quickly have everyone except the Treasurer forget all about it. People get caught up over what the NC can and cannot do. It’s a sucker’s game. Do your thing and unless the Treasurer says you can’t, just do it.

If DONE doesn’t like something, they won’t pay it for it anyway; and if they deny payment, demand that they put their reasons in writing so that your Board can discuss it. If they don’t respond at all (a DONE favorite), have the full Board send them a letter demanding an explanation. Their job is to help you, not hoard your money so that they can “sweep it” into the general fund or back into DONE’s budget.

If you have ongoing payments for what the City should, by law, be paying for you -- like for a website, utilities, meeting space, etc. Set it up so that DONE has to pay those recurring bills and you don’t have to be bothered. It’s their job and if they don’t have enough staff to do it they need to hire more people, not thwart you from doing your job.

As another suggestion, you could decide to only deal with financial matters every other Board meeting and use the rest of the time to do the people’s business.

Since the issues of handling both the Brown Act and Money seem to be the primary complaints from new NC Board members, (who are simply trying to represent their community and act as a check and balance on the City Hall Monster,) this column seemed like a good beginning. Most folks do not get involved in a Neighborhood Council to become Brown Act attorneys, parliamentarians or accountants. In fact, if they have to do that, they will leave.

See if these tips help make your NC lives easier and let you do the stuff your NC wants done. To be really bold, you might check out my recipe for radicals -- a five step plan to Take Back Our Neighborhood Councils.

Anyone who has an idea or suggestion as to how to make the Neighborhood Council System work better for the troops instead of for the City Establishment, you can contact me at [email protected]

(Tony Butka is an Eastside community activist, who has served on a neighborhood council, has a background in government and is a contributor to CityWatch. Edited for CityWatch by Linda Abrams.