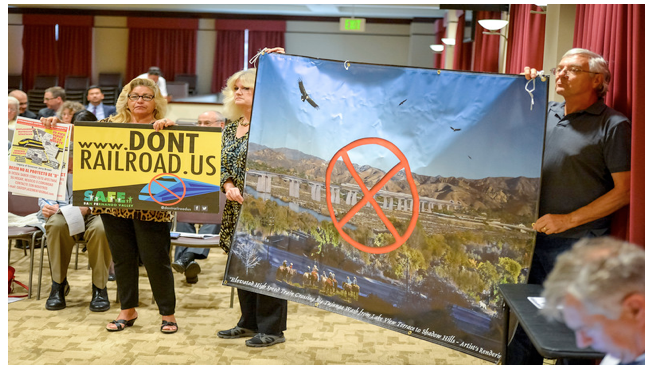 EXPOSED--On March 17, when California High-Speed Rail Authority Chairman Dan Richard gave his word to the residents of Pacoima, Sylmar, San Fernando, Santa Clarita and surrounding areas that their communities were no longer in the path of the bullet train’s high speed approach into Burbank from Palmdale, there was an outpouring of relief and gratitude.

“Thank you Lord for saving Sylmar, San Fernando, and Pacoima,” one woman said at a community meeting shown on NBC.

“I’m happy my house is now safe, as is most of my community,” said another woman, quoted in the Daily News.

A few weeks later, in a television interview with Conan Nolan, Chairman Richard re-pledged his agency’s commitment to the San Fernando Valley. Referring to some alternate routes under consideration, Nolan asks, “These new routes don’t bifurcate Sylmar, San Fernando the way the other ones did?”

“Right,” Mr. Richard answers. “We’ve been able to bend away from that [original route] so that we’re not impacting those communities.”

“Not impacting those communities?” It’s a big claim and with profound implications for groups organized by local residents to oppose the original route of the bullet train. With the battle won, why bother staying vigilant?

The answer, unfortunately, is that the battle was not won. Far from it. And Chairman Richard’s promise that the High Speed Rail Authority won’t be impacting those communities was empty.

The method by which the Rail Authority plans to achieve its “no impact” route -- twenty miles of deep tunnels bored across numerous fault lines at depths of up to 2000 ft and through varying types of rocks, including those below the suburbs of Pacoima -- is by no means a done deal in terms of geotechnical feasibility.

The Authority’s own report states that ongoing testing is being done to assess potential construction constraints posed by in-situ groundwater pressures, the orientations of rock mass discontinuities and fracture density, hydraulic conductivity, and so on.

Even if all the tunneling works out, the mitigation provided is of limited extent and by no means impact-eliminating. For example, while the tunnelized high-speed rail route reduces by 7000 the number of residences subject to Noise and Vibration disturbance, it still leaves 14,328 residences subject to that hazard. And while the tunnelized route causes fewer business and residential displacements -- 406 displacements as compared to 653 -- that’s not exactly zero impact.

What’s more, Sun Valley derives no benefit at all from the tunnelized approach touted by Chairman Richard. The train has surfaced by the time it reaches that community.

All this is bad enough but Pacoima and Sylmar have no one to stand up for them in this fight. Since Felipe Fuentes' departure on September 11-- to go work for a Sacramento based lobbyist firm called Apex -- the residents of Council District 7 have been stripped of their legal right to representation on the council.

Why is Council President Wesson blocking the appointment of a replacement council member for District 7? And why won't Mayor Garcetti stop him?