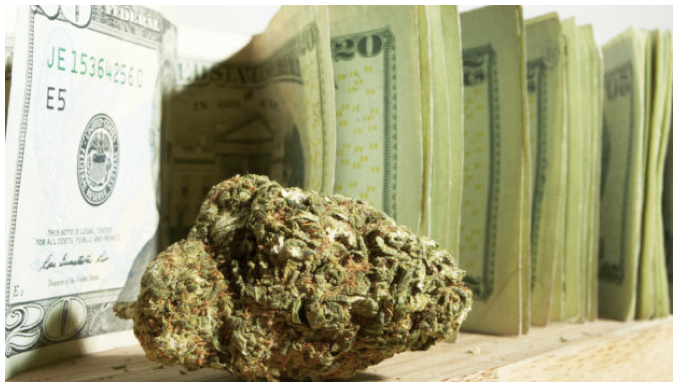 SPECIAL PROP 64 REPORT--At the Oct. 18 Central San Pedro Neighborhood Council stakeholder meeting, President Mona Sutton read aloud a statement released by Los Angeles City Council President Herb Wesson, just two weeks earlier. The statement called on the city’s neighborhood councils and citywide committees to discuss the legalization of cannabis. He expressed the hope that this could be a space where community impact statements, white paper suggestions and recommendations could be provided to the Rules, Elections, Intergovernmental Relations, and Neighborhoods Committee -- a committee he chairs.

For Sutton, this call-out was a welcome change from her experience a couple of months prior when she chatted with Mayor Eric Garcetti during a regional gathering of neighborhood council presidents.

“With a pending vote on cannabis in California, are you going to get out in front of it anytime soon?” Sutton recalled asking.

She said the mayor looked a little dumbfounded by the question before she followed up with a suggestion.

“How about [making it so that potential operators pay] $100,000 to open or get permit fees for this and renew it yearly?”

“We can call it the Sutton tax,” Sutton recalled the mayor facetiously responding. “You can call it whatever you want, but how about we start a fund and use for something really important?” she asked.

Matt Garland, a local stakeholder at the meeting, agreed with Sutton, except for the part about the $100,000 entry fee.

Garland, a medical marijuana patient for the past 15 years, said he was excited that there are groups and cities looking at how communities can benefit from the legalization of recreational cannabis.

“There are some potential benefits with legalization, but it depends on how the city regulates it,” he said. “I’m really hoping we can do something in Los Angeles.”

“This could be just one more job that people are doing,” Garland said in a later interview with Random Lengths.

Garland sees this moment as an opportunity to bring above ground the existing black market economy of marijuana. Garland said he spent eight years in Humboldt County in the 1990s. He recalled communities with few job opportunities but they had their own growing project going, providing a lot of people with a little bit of income.

“We’re talking $20,000 to $30,000 a year for a part-time job,” Garland said. “The result of that was that small businesses prospered because people had money to spend. I know that was 20 years ago. But I do see the potential benefits.”

But Garland’s views are a little different when it comes to how Los Angeles has been dealing with the illegal cannabis dispensaries opening up everywhere, then shuttering like pop-up restaurants. He agrees with City Attorney Mike Feuer’s aggressive crackdown since he came into office.

“My concerns for San Pedro are in regards to patient access, family safety and the lack of regulation around medical cannabis,” Garland said. “It has created an unsafe environment for the community.”

He went on to say that Wilmington and parts of San Pedro have been made a dumping ground for illegal pot dispensaries. To a certain extent, Garland’s attitude was similar to that of neighbors of Barton Hill Elementary School who turned out for the Sept. 25 rally opposing a proposed navigation center on Pacific Avenue.

At the time, rally attendees mocked bureaucratic attempts to sanitize the public perception of homeless storage facilities and weed shops by renaming them “navigations centers” and “medical marijuana dispensaries.”

The enduring popularity of 2013’s Prop. D, the ballot initiative limiting the number of medical dispensaries to the 135 that opened prior to 2007, is probably the reason why Los Angeles has been so slow to prepare for the possible passage of Prop. 64, along with Feuer’s reelection bid to office in 2017.

Feuer’s visit to San Pedro on Oct. 13 illustrates this point. It was intended to be a town hall meeting in which he would give a brief introduction, then open the floor for questions from attendees. There were 75 to 100 people present.

Included in his opening remarks was the fact his office, with the help of the Los Angeles Police Department, has closed more than 800 dispensaries in Los Angeles -- 48 in the Harbor Division alone. Many more are still being investigated in the Los Angeles Harbor. This announcement was received positively, even if most of the attendees were more interested in hearing about Feuer’s enforcement efforts regarding problems related to homelessness.

When he gave the same intro in Wilmington, the applause was sustained for 30 seconds or more.

At this meeting, he reminded attendees that he had no staff and no list of addresses to work from when Prop. D was passed.

The city attorney also said there may be five or six shops that may be able to satisfy criteria to be immune to prosecution. The number of investigations are declining, he noted, because they are closing the dispensaries as investigations proceed.

It was at this meeting that residents learned that there’s another initiative headed towards the March ballot that would create some licenses for marijuana facilities in the city.

“Another thing has happened,” Feuer answered to a question about the possibility of legalization. “Gov. [Jerry] Brown signed a law about a year ago that created some regulation for medical marijuana in the state and only allows those that are permitted by local jurisdictions to exist.”

As Feuer noted, none of those that are permitted are legal in the city.

“If I’m going to guess, there are going to be some significant changes in several areas of this law but in the meantime we are doing what you asked, and that [is] aggressively enforcing the law.”

But there is a subset of activists, civic leaders and community members who believe the passage of Prop. 64 can economically benefit historically disadvantaged communities in very tangible ways.

Carson is dealing with similar concerns. The community hopes legalization will be an opportunity to expunge the criminal records of youth who where arrested for marijuana possession. In turn, they can then find better jobs.

On Sept. 24, former Los Angeles City Councilman Robert Farrell, in conjunction with the Carson-Torrance chapter of the NAACP, hosted a town hall meeting on Prop. 64 at the Carson Recreation Center — one of many in recent months focused on the potential impact on communities of color in Los Angeles County.

The panel included Greg Akili from the nonprofit organization Corporate Accountability International, which is known for its high profile campaigns to protect public health, the environment and democracy from abuse by transnational corporations; Virgil Grant III, co-founder and co-chairman of California Minority Alliance, a nonprofit that aims to prepare disadvantaged communities to economically benefit if marijuana is legalized; and Cat Packer, a campaign coordinator for Californians for Responsible Marijuana Reform.

Farrell framed the conversation by noting the negative impacts that the war on drugs has had on communities of color.

“If this passes, we will see a cultural shift,” he said. “The moment is here, but where do we go after?”

He went on to say that passing this proposition has broad ranging impacts on life as we know it and might lead to better business opportunities for blacks and Latinos.

“Before 1964, only whites owned the liquor stores in Watts,” he said. “After the Watts riots, blacks and Latinos went into businesses, they got liquor licenses and liquor stores.”

Carson resident Robert Leslie, a retired police officer who worked on a drug task force, said he was very concerned about rising crime rates as a result marijuana legalization for recreational use.

“As a police officer I saw recreational marijuana use … connected with burglary and assault,” Leslie said. “Many people I arrested were repeat offenders. Then they had to go into reversion programs…. Smoking marijuana also causes cancer. And according to some studies smoking it is worse than tobacco.”

It wasn’t just retired police officers who still had misgivings regarding marijuana’s legalization. Others also expressed concern, like Tony Wafford.

“To be honest, I could care less if people out there are smoking weed,” Wafford said. “That’s what I call it, not cannabis or marijuana. It’s weed. But I am still battling with what weed does to people.”

Wafford recounted his son’s experience with a medical marijuana card.

“He went to a job interview and then he tells me he can’t pee in a cup. I said, ‘Where’s your weed card?’ He said that wouldn’t help. I smoke cigars and drink brandy on Sunday, but I can pee in a cup on Monday. If this proposition passed tomorrow, can people go and do whatever test they have to and get a job?”

The third expert speaker was Packer. She said when she was in law school she did not think she would get involved with marijuana legalization -- she wanted to stick to civil rights issues.

“But, I’ve seen bad legalization,” said Packer. “I worked on a legalization campaign in Ohio. Ten investors were spending $2 million each to control all of the state’s cultivation. To try to get more voter support these investors put forward a companion bill that would expunge records, but only after the other initiative passed and the investors got their monopoly. I moved across the country and got involved with Californians for Responsible Marijuana Reform because this is a civil rights issue. Mass incarceration is real. And. it is due to drug arrests, which are primarily related to marijuana.

“Because money is involved in this, legalization is inevitable, but you have a choice of what type of legalization you want. Proposition 64 is not perfect, but it’s the best initiative so far because it acknowledges the war on drugs and the harm that it has had on the black community.”

Packer went on to give some key features of the proposition:

When Packer began to talk about how the revenue would be used she took a moment to get personal.

“If it were up to me, some of this money would be going into training cops not to be racist,” Packer said.

There were grins and scoffs and someone exclaimed, “That’s not going to happen!”

Nevertheless she encouraged citizens to be aware and provide input to their cities if the proposition passes.

During the question and answer portion of the forum, attendee concern ran the gamut of where will the taxes go to where they are needed to the potential of increases in crime.

Packer said that her group plans to organize watch parties on election night with people who have marijuana convictions. That way at 12:01 (a.m. Nov. 9) after Proposition 64 passes, the state will have a list of people whose records can be expunged. This bit of information received a rousing round of applause.

Packer noted a tough road ahead in changing perceptions of marijuana. She looked professional and was well dressed. She told us that she is a recreational user of marijuana.

Virgil Grant asked the crowd to lobby to change the drug testing issue and to lobby assembly members like Mike Gibson on the issue.

Akili said that the fight against white supremacy is not over, that some will find ways to keep minorities unemployed (credit tests and appearance like hijabs or tattoos.)

Prop. 64 does not give a one-size-fits-all solution to cities. It offers flexibility.

Residents and business owners from Carson to San Pedro have been invited to join the conversation and affect local marijuana policy.