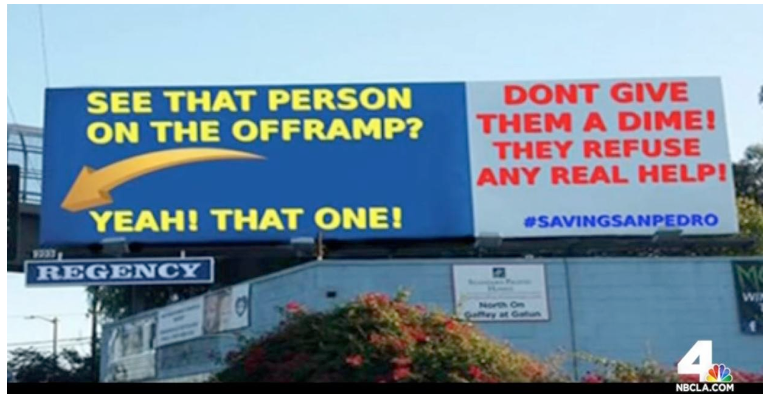 This old rhyme states, in a nutshell, the way I think most people view the matter of homelessness in our country. Perhaps now, more than at any time since the Great Depression, significant numbers of Americans are living on the street. Certainly in Los Angeles, homelessness has grown to epidemic proportions.

In all the years (nearly 40) I’ve been in southern California, the homeless have been present. I lived and worked for a long time in and near downtown Long Beach. My neighbors and I knew many of those who populated our streets. Some were considered to be colorful characters, harmless enough and not really much of a problem. The seriously-disturbed and aggressive panhandlers were rare and seemed not to be around for long.

I moved across the bay to San Pedro and there, too, was a relatively small population of homeless. They congregated in a particular area of downtown and, for the most part, weren’t considered to be much more than a nuisance; a problem easily avoided.

And then came the recession. Many lost their homes and never got another one. Social services and government felt the pinch, too. Even now, those with jobs are often hard pressed to afford the rent. As a consequence, we see the homeless hanging out in front of our organic food markets and sleeping on bus benches normally occupied by the people who clean our houses. Occasionally, suburban sensibilities are shocked when someone in a nice neighborhood looks out the window and sees a dilapidated vehicle inhabited by a scruffy individual who may not have seen a bar of soap in weeks or months.

Spend some time online at Facebook and other social media sites and you will come to the conclusion that, for most commentators, the problem is not that people are homeless, it’s that they are visible. In my community, the response of the vocal majority of the ninety-nine-and-a-half percent who are not homeless is to dehumanize the homeless. These folks delight in posting pictures of the obviously mentally ill and calling them names. All homeless are lumped together as a class that is intellectually and morally bereft. According to the “commentariat,” the homeless are homeless because they want to be homeless.

My city councilmember and his homelessness task force recently proposed opening a “navigation center” providing storage for the property of the homeless and offering them services. The suggested location on a commercial street was met with a barrage of criticism from the surrounding area. A public meeting to explain the plan was mobbed by a few hundred angry residents whose answer to everything was a resounding “no.”

There are as many “solutions” as there are homeless individuals. I don’t know what the best ones are. But I do know what the worst one is: pretending it’s not your problem and wishing it away.

(Doug Epperhart is publisher, a longtime neighborhood council activist and former Board of Neighborhood Commissioners commissioner. He is an occasional contributor to CityWatch and can be reached at: [email protected]) Prepped for CityWatch by Linda Abrams.