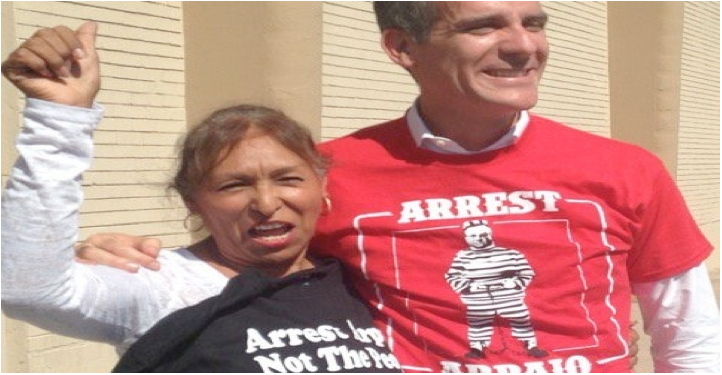 SOUTH OF THE TEN-Los Angeles Mayor Eric Garcetti has hit the campaign trail. This past weekend he popped into Arizona to attend a campaign rally for a local candidate running for Sheriff. Normally this wouldn't interest me but a Twitter account I follow made a big deal of who the mayor was campaigning against, along with the t-shirt he was wearing that promoted an anti-police group.

The Twitter account, @Near_Chaos, has a passion for reporting on the goings-on at the weekly sideshow called the LAPD Police Commission meetings. The meetings themselves appear not to have any merit -- loved ones of the deceased cannot get answers, nor can the Commission really reform the beleaguered department.

At the core of the weekly ruckus are members of the Los Angeles chapter of Black Lives Matter (BLM). Members publicly protest what they and many others view as the continued disproportionate rate of excessive force used on people of the South LA community.

BLM Members have camped outside the mayor's house in Hancock Park and City Hall. News vans spotted a cleanup crew at Getty House after it was hit with dozens of eggs. Some have been arrested trying to get the mayor's attention to this issue, to which he responds by either slipping out the back door or publishing an empty column in an urban periodical. And he’s also appointed African-Americans to key positions within his office – all this while supporting Chief Charlie Beck, who has yet to publicly reprimand any of the officers named for shooting an unarmed citizen.

Back to this past weekend.

Mayor Garcetti was recorded on social media at a campaign event for Maricopa County Sheriff candidate Paul Penzone, who is running against the infamous “Sheriff Joe” Arpaio. See video here.

Garcetti prefaced his speech by referring to his strong roots in Arizona and commented that his family still resides there. He further commented that “Sheriff Arpaio is wasting taxpayer money” with his policing policies. Sheriff Joe is well known for racially profiling the Latinos in the area.

Arpaio styles himself as "America's Toughest Sheriff." He has been accused of abuse of power, misuse of funds, failure to investigate sex crimes, improper clearance of cases, unlawful enforcement of immigration laws, and election law violations. He is currently facing criminal contempt proceedings.

Maricopa county taxpayers are paying $4.5 million for Arpaio's legal defense fees, related to the racial profiling and open defiance of a federal judge who ordered he change his policies. Sheriff Joe did not comply and is now facing contempt charges.

At some point during his visit, Mayor Eric donned a t-shirt that read, "Arrest Sheriff Joe," while standing next to a woman whose shirt read, "Arrest Arpaio Not the People.”

The t-shirts fund a group called "Bazta Arpaio.” Citing 150 deaths in the jails and $140 million in related lawsuits, the group implores you to either donate money and/or buy a shirt to support their cause of ousting the Sheriff. Will Mayor Eric help BLM raise funds to oust him and Charlie Beck?

Somehow the mayor has time to address the needs of the Latino community in another state, yet has no time to address the problems in his own backyard. The mayor is clearly sending mixed signals as it relates to his position on police abuse, both local and nationwide.

LAPD recently came out from being under a federal decree, spearheaded by Connie Rice during the Riordan and Villaraigosa administrations. Through her nonprofit, the Advancement Project, she has joined other community activists in South LA by declaring a “state of emergency” in Los Angeles, related to the latest cases of police abuse.

Mayor Eric Garcetti’s actions are line with an elected official who sympathizes with those who are victims of police brutality. Unfortunately, he is not brave enough to say it here at home and to use his political power in the way he flaunts it in other cities. On the other hand, perhaps his last two LAPD Police Commission appointments are saying it themselves via their actions during the PC meetings.

(Melissa Hébert lives in Inglewood, CA, and blogs on community and political issues on 2urbangirls.com and is an occasional contributor to CityWatch. ) Edited for CityWatch by Linda Abrams.