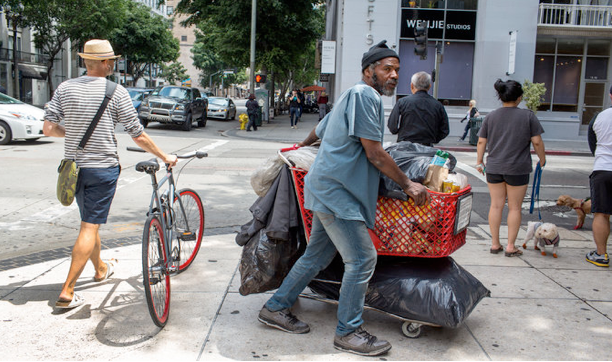 Growing public attention to the issue has prompted city leaders to ramp up efforts to address it; but without immediate support, homeless Angelenos are unlikely to experience much-needed relief. The state government, however, has been reluctant to dole out the money needed to kickstart substantive efforts for short-term housing and assistance despite repeated overtures from city and county leaders.

The most recent count of Los Angeles’ homeless population in May found almost 47,000 people in the county without permanent residence, an 11 percent increase since 2015. Of those counted, 74 percent were unsheltered. The situation is so severe that the Los Angeles County Board of Supervisors urged Gov. Jerry Brown in June to declare homelessness a statewide emergency – the Los Angeles City Council did the same last month.

Brown’s declaration would unlock up to $500 million in emergency funds, but the governor’s office has insisted that homelessness is a local problem for local government to address.

While local government should be responsible for implementing long-term solutions, such as permanent supportive housing, the state must use its emergency monies to address the current, real crisis.

[Related: LA should fulfill its budget proposal to fight homelessness]

So far, city leaders have been doing their part by approving Proposition H, a $1.2 billion bond measure designed to spur construction of housing for homeless Angelenos, to appear in the ballot this November. If passed, the bond would focus on permanent housing and in-house social services.

But the cost of homelessness in the interim is high. The hospitalization, police intervention or incarceration of each homeless person can cost taxpayers tens of thousands of dollars per year.

Meanwhile, homeless people still struggle to find short-term housing and, for those who have simply fallen on hard times, assistance to help them get back on their feet. The Los Angeles Times noted that transitional housing establishments have seen their funding cut as the focus shifts toward permanent solutions, leaving their clients with nowhere to go. This not only prevents the unemployed or economically pressed from having the time or resources to hold them over, but it denies those with substance abuse issues or mental illness much-needed treatment, and instead, leaves them on the street.

It’s clear the state must declare a homelessness emergency. Local officials have extended their resources toward developing longer-term solutions, but the state needs to help address the current emergency and help cover the costs for shorter-term efforts to keep homeless people off the streets and get them the help they need while permanent housing and services are developed.

(This editorial appeared in UCLA’s Daily Bruin.)   Prepped for CityWatch by Linda Abrams.