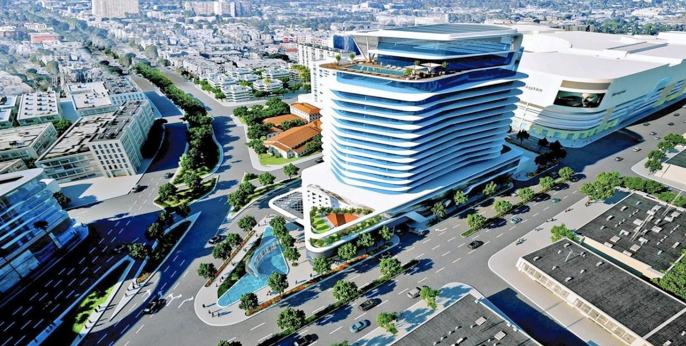 DEEGAN ON LA-Rick Caruso has a long and sentimental history with his property at 333 S. La Cienega Boulevard (currently the site of the shuttered Loehmann's department store.) It’s the first property he owned. It’s where he washed cars as a kid at his dad's dollar-a-day car rental business. And, it’s where he dreams of building his newest project that will make a statement about contemporary high-end housing by including an affordable housing component that could make it a landmark building in more ways than one. (See above photo of rendering.)

Rarely have developers allowed low income housing units to be part of the mix in their high-end luxury buildings, preferring to subsidize affordable housing at off-site locations in return for the zoning variances they receive. But Rick Caruso, founder and chief executive officer for Caruso Affiliated, has a new take on that.

Already a pioneer in trend-setting, open-air shopping experiences like the Grove and the Americana, Caruso could become a leading figure in egalitarian housing if he’s able to deliver on a pledge he made to a community group a few weeks ago, when he went on public record at the Mid City West Community Council's land use committee meeting, stating, “The affordable units will be treated like all other units, and serviced like all other units. There will be a lot of pride about the project, a lot of dignity and respect for the affordable housing tenants that will be interspersed throughout the building. They’re going to be just like everybody else. The same level of service, for free.”

He’s a man with a dream to have his luxury housing tower shared by all walks of life -- rich and poor – in a residence building that is both elegant and equitable, where the 1% and the 99% come together. If Rick Caruso pulls this off, it will be groundbreaking; it will change the development and affordable housing paradigm, and could make him the very first billionaire-populist in the city.

Caruso’s struggle to bring the community along into his over-scale dreamscape, that will make his tower one of the tallest buildings in sight, was evident at Mid City West Community Council’s recent land use committee meeting. 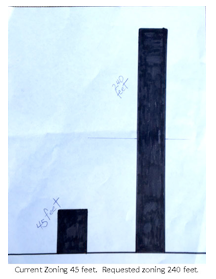 As democratic-sounding as this may be -- housing the rich and the poor in the same building, with equality of service for all -- there’s a big downside: Caruso wants to build a 240 foot tall building in a zone that has a maximum height of 40 feet (see graphic, left.) That’s a huge increase in what’s permitted, which has many asking how much is too much? It requires a “spot zoning” variance which is anathema to many. In fact, “spot zoning” is one of the key reasons the Neighborhood Integrity Initiative is on the March 2017 ballot, having qualified with more than one and a half times as many signatures as necessary, illustrating the public’s hunger for zoning redress that has tapped the very nerve that Caruso is trying to soothe.

There’s a very good reason he must go up: he cannot go down. As he told the community meeting, “I cannot go underground with parking because of a massive storm drain. That forces parking to go above ground, and increases the height of the project. The parking will be three floors above grade and two floors below grade,” explained Caruso as the reason he is proposing a twenty floor building in an area that is zoned for four floors. And, he says, he cannot lose units. “I need the height because it’s very expensive to build there. I need 145 units. It’s already down from 165 units.”

“The way to bring the building down [in height] is to use more of the site, but lose setbacks,” said Caruso. “The alternative would be to make an office building, taking the existing building and re-leasing it, or taking it down and making a new building.”

“I would be disingenuous to say there is no leeway [on the height.] My strong preference is for 20 stories. I can’t lose units. When I lose floors I lose units. Then I’d have to decide not to build the building. There are ten units per floor. I can make the height of the floors less high.”

How the community reacted to this, and how much of a gap between what he wants and what they will be comfortable with came out in over three hours of presentations, deliberations and a full court press by Caruso himself, who faced a sharply divided community audience. It took an hour just to hear all the public comment for and against the project. It was a passionate exchange, with Caruso spending lots of time at the microphone answering questions and putting forth his case. Questions keyed mostly to the height of the building and how Caruso would accommodate affordable housing.

In the end, the gap between what he wants, and how much the committee is willing to give, was mostly about the height question, although the on-site affordable housing element was also subject of much debate.

When the committee finally took a vote, it was deadlocked on a motion that would have advanced the project. Key elements of that motion were:

The land use committee vote was a deadlock and the matter was tabled. The next scheduled meeting is on October 6, when a motion can be created to send to the full board for its October meeting. Not reaching consensus at this meeting squeezed the window for community review. At least two more sessions (another land use committee meeting and then a full neighborhood council board meeting) will be required before Caruso knows how much support he will receive from the neighborhood council. And, he must play Beat-the-Clock with the March 7 vote date for the Neighborhood Integrity Initiative which, if passed by voters, will result in a moratorium on “spot zoning.”

A few weeks after that community meeting, Rick Caruso met with CityWatch to present some new information that specifically addresses some of the concerns raised in the deadlocked motion at Mid City, especially the affordable housing element. This may go a long way toward helping him align with the community -- that is, if he and the community can ultimately agree on height.

He began by revealing a change in plans: “In response to community input, two years ago, we cut the retail square footage in half and reduced the number of proposed apartments from 162 to 145. In addition, we committed to creating new open space, building new crosswalks and bike lanes, and landscaping and maintaining the city medians. We are planning for a neighborhood-serving restaurant and market, ensuring community use of 333’s board room, and making a 55-year commitment to affordable housing. We also changed our entitlements to eliminate the Regional Center issue and become an SB 1818 project.”

CW - Why are you dropping the “Regional Center” designation?

R.C. - “The 333 La Cienega parcel is a unique island surrounded by four major streets (San Vicente, La Cienega, Burton Way, and 3rd Street) and is immediately adjacent to Cedars Sinai Hospital and the Beverly Center. It was logical to extend their Regional Commercial designation to the 333 parcel without negatively impacting single family residences or setting a new precedent. However, we take community stakeholder recommendations seriously. They asked how we could both build this project without the Regional Center zoning and ensure that the affordable housing would be monitored as if it were an SB 1818 project. The new entitlements accomplish both.”

CW – Are you changing the zoning so it will match that of your Burton Way building?

R.C. - “We seek to extend the zoning for 8500 Burton Way to its sister property across the street, 333 La Cienega. Instead of a GPA to Regional Commercial, the project would be amended to “General Commercial” which is consistent with nearly every other adjacent property on 3rd Street and San Vicente. The result is no new precedent for zoning, the entitlements simply bring 333’s zoning up to that of its neighbors. As with 8500 Burton Way, 333’s [zoning] will be height district 2.”

CW - Are you switching to SB 1818 (the state's density bonus law) status? How will that impact the number of affordable units?

R.C. - “Yes, the change is to both enshrine the affordable housing as an SB 1818 project and allow for the number of units needed to make the project work. This includes funding millions of dollars in street and safety improvements as well as building the new open space.

The SB 1818 calculations are 5% “very low income” housing as seven (7) units. However, we have already committed to eight (8) units and that will be in our agreement with the City. These units will then be monitored by the City’s Housing and Community Investment Department (HCID) to ensure public oversight.”

CW - Why is there no affordable housing at 8500 Burton Way?

R.C. - “8500 Burton Way was entitled years ago. Our region now has a significant housing crisis. Thus, changing times led us to include those units in this project.”

CW - How important has been community feedback to your plans?

R.C. - “This world-class project will be one that the community is proud of and the market-rate for building units allows us to provide millions of dollars of public improvements and the ability to have affordable housing. Furthermore, I believe 333 La Cienega will set the new standard where these types of public commitments and community collaborations are the norm rather than the exception.”

“I want the buildings (at 333 La Cienega and 8500 Burton Way) to be a brother and sister -- sympathetic to each other,” concluded Caruso.

The dreamer-developer had one final word about the project: “I want to make it work for everybody.”

Caruso will find out if that dream can come true in the next few weeks, as the neighborhood council again weighs in on his plans.

(Tim Deegan is a long-time resident and community leader in the Miracle Mile, who has served as board chair at the Mid City West Community Council and on the board of the Miracle Mile Civic Coalition. Tim can be reached at [email protected].) Graphic: Rosalie Wayne. Edited for CityWatch by Linda Abrams.