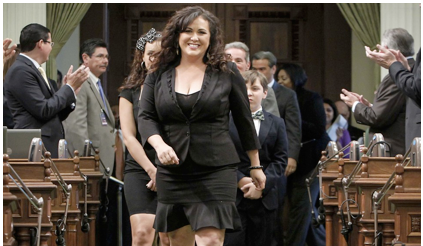 POLITICS--Not many politicians have risen as fast as Assemblywoman Lorena Gonzalez, D-San Diego. She just scored the 35th spot on Politco Magazine’s annual list of the Top 50 politicians in America, its “guide to the thinkers, doers and visionaries transforming American politics in 2016.” She’s listed as “The progressive ideas lab.”

“If states are the laboratories of democracy, then Lorena Gonzalez might be the nation’s most ambitious progressive scientist,” Politico enthuses. “After decades of lurching from crisis to crisis, California has emerged as a test case in how progressive government can work. And since 2013, Gonzalez, an assemblywoman who represents the state’s southernmost district, has become the brain trust for California’s most ambitious policy ideas – in the process, mobilizing liberals across the country too.

Her polices: The “Motor Voter” law for voter registration. Co-authoring the rise in the state minimum wage to $15 an hour. [The nation’s strictest law aimed at closing the gender pay gap, as well as proposing a bill this year to expand overtime for farmworkers. But it’s Gonzalez’s trailblazing advocacy of mandatory paid sick leave that could make the biggest difference nationwide.”

Except that all the economic policies impose higher costs for hiring people. As you learn in Economics 101, if the price of something rises, demand goes down. So the demand for workers will go down, raising unemployment.

But in politics, being lucky counts more than being right. And these policies occur as the country’s economy is growing, albeit at a slow pace. And in California, Silicon Valley’s extraordinary growth is paying for the higher cost of state government.

But the growth largely is in stock and real estate values, which artificially are pumped up because of the Federal Reserve’s zero-interest-rate policy, or ZIRP, now in its eighth year. When that ends, which might be next year, the economy will contract as it did in 2007-08. California’s unemployment rate will rise back to 10 percent – or higher, thanks to the new Gonzalez legislation.

And state deficits will soar back above $20 billion a year, despite (or because of) the two massive tax increases on this November’s ballot, which likely will pass. They are Proposition 55, $7 billion on those making incomes over $250,000 a year, which number actually puts one in the middle-class in California, because it’s already so expensive to live here. (This shocks folks from other states, but it’s true. What’s left after paying sky-high state taxes and a $4,000 monthly mortgage payment on a dinky home?)

And Proposition 56 ignites taxes $2 a pack, primarily on poor people, about the only ones left who smoke here. It also will boost a larger black market to fund terrorists.

But nobody will blame a mere state legislator for any of those disasters. The politicians at the top will get blamed. So, if a massive recession hits, it will be Gonzalez’ hour. 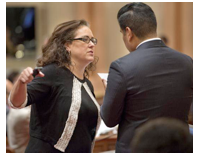 Her rivals: As the lieutenant governor, Gavin Newsom will get much of the blame, even though his influence in that position is less significant than Jerry Brown’s dog, Colusa. Treasurer John Chiang, the other announced candidate for governor, will be hit with less blame, especially because of his reputation for frugality; but he’s still part of the state bureaucracy. And Antonio Villaraigosa’s mayoralty of Los Angeles (2005-13) is not remembered with fondness, as the latter part coincided with the Great Recession and the great city’s near bankruptcy.

Republicans, of course, are out of the running for statewide offices.

Voters also seek a fresh, cheery face. Gonzalez is a kind of Democratic Ronald Reagan, who actually was a Democrat the first part of his life. Add to that Democrats’ desire to advance women (see: Hillary Clinton, and the California Senate race) and Latinos/Latinas, and Gonzalez’ candidacy for governor seems inevitable.

(John Seiler is a former editorial writer at the Orange County Register. He is a veteran California journalist and can be reached at The Seiler Report. This piece was posted most recently at Fox and Hounds.)