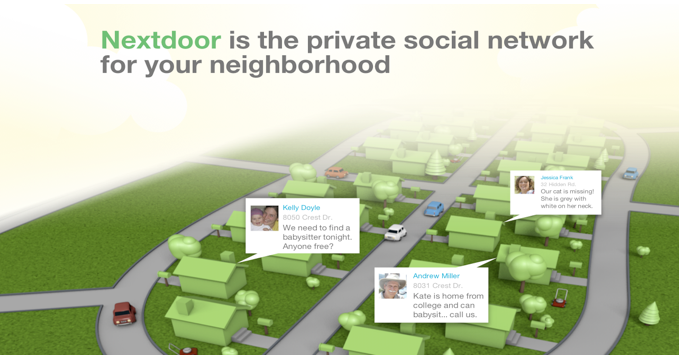 MY WAY--I like to think I am an equal opportunity critic and cheerleader but, of late, I’ve been more of a critic. So, I am happy to play cheerleader this week in writing about something that seems to be bringing neighbors together.

If you are like me, you receive -- on a daily basis -- what seems like hundreds of emails that are of no interest. Aside from the spam, the scam, and other sexually charged missives, there are the commercial messages that I can easily do without. Still can't figure out how I got on the list for Viagra and beautiful Russian women!

There are, however, certain emails I read on a daily basis. One of them is the Nextdoor Daily Digest. I bring up this particular website because of a conversation I had with some friends who are paranoid about their privacy. They use the internet in their business and personally, but mention sites like Facebook, Linked In, Instagram and Nextdoor etc., and it’s obvious they are not interested.

The reason given for this loathing is, "I don't want people to know who my friends are or what I am doing." Yes, the age factor does make a difference. Millennials and Baby Boomers, at least the younger Boomers, don't have the same privacy issues. I must admit I enjoy Facebook because it allows me to keep in contact with my friends all over the world. I seldom post anything other than my CityWatch articles but admit to making comments, likes, and I've even learned to use the emojis.

Nextdoor is a completely different type of social media. I learned about it when the City of Los Angeles entered an agreement with Nextdoor about three years ago. EmpowerLA introduced it to the Neighborhood Councils and encouraged them to set up an NC Nextdoor pages. Gradually it broke into smaller and tighter geographical areas. My group has 149 members with more joining every week.

The site defines itself as the free and private social network for neighborhoods. On Nextdoor, neighbors create private online communities for their neighborhoods where they can ask questions, get to know one another and exchange local advice and recommendations. A recent Pew survey reported that a Facebook user has only 2% of its neighbors as friends. So this is more targeted.

It was started by several Silicon Valley "techies" in 2010. They were wondering how they could bring their Menlo Park neighborhood closer together. In 2011, they went national with this concept and now have a 65% representation in 112 communities in the U.S. There are no ads and the sign-up and postings are free. How do they make money? Right now they don't generate any income but are conducting some pilot programs which should end up making the site profitable. This will undoubtedly please their various capital venture investors. They insist that the basic concept will remain free.

There are more than 500 different Nextdoor groups in the City of Angeles and more than 5500 in the greater Los Angeles area. Aside from the 112,000 plus sites throughout the U.S., they are in the Netherlands and this week opened officially in the UK.

It’s easy to get started: simply visit www.nextdoor.com and enter your email and home address. If Nextdoor is already available for your neighborhood, you will automatically be invited to join that neighborhood. If not, you'll be given the option to create one by drawing the boundaries of your neighborhood on a map, naming your Nextdoor site, and inviting your neighbors. You must have at least ten sign-ups in twenty-one days. You must use your real name and street and there are three ways to authenticate that you are who you say you are.

Nextdoor communities are self-moderated by the neighbors who live in the communities. Needless to say, all Leads and Founders are volunteers. This can include the Founding Member who started Nextdoor in his or her community, as well as the Leads of the neighborhood. In addition, any member can flag content to their Leads or contact Nextdoor’s support team. They have what they euphemistically call a conflict resolution team to handle improper posts.

Posts are divided into categories in the daily digest and on the website. Topics of discussion on Nextdoor are as varied as local events, school activities, plumber and babysitter recommendations, recent crime activity, upcoming garage sales or even lost pets. Breakdown of conversations on Nextdoor is as follows: 7% events; 8% lost & found; 8% free items; 16% crime and public safety; 19% classifieds; 26% recommendations; and 16% other.

As an example, here is what is in my Nextdoor digest today:

Cat to a Good Home

Looking for Lost Dog (with pic)

Car broken into parked in front of my house

I asked the Head of Communications, Kelsey Grady, if they have many improper or nasty postings. She replied that they do get some. There are one or two "leads" for each neighborhood site. These are volunteers who keep an eye out for problem posts and answer questions.

One of their recent challenges has concerned "racial profiling." The company is confronting a tough problem: How do you stop an activity when people can't even agree on how to define it? Jaywalking and speeding are easy. Racial profiling does not have a universally accepted definition, as experts in criminology have noted.

If you go to their website you will see the large amount of press coverage they have received on this issue. Nextdoor decided to create a working definition that is relatively broad: anything that allows a person to stereotype an entire race. Throughout this summer, CEO Nirav Tolia and his engineers have been testing ways to put a stop to it online. He says that they have managed to decrease racial profiling by fifty percent; he looks forward to eradicating it completely in the near future.

People engage in racial profiling "often not on purpose," Tolia says. It's implicit bias. For example, he says that a user might think, “‘If I look out my window, and I see someone breaking into a car, and the only thing I see is that they are dark-skinned, why can't I post? That's all I see.’”

Tolia continues, "The problem with that post,” — ‘a dark-skinned man is breaking into a car’ —, [is that] while the activity sounds like a crime, the description of the alleged perpetrator lacks any useful detail, like what he was wearing, his sneakers, his hairstyle or height.

"Because that message goes out to the entire neighborhood, where presumably many of the neighbors reading the post are dark-skinned, that would be considered racial profiling," Tolia explains.

Nextdoor has been no stranger to such posts. The end effect, he says, has been more hurtful than helpful, generating animosity among neighbors instead of offering useful tips for law enforcement.

In a pilot project running in select neighborhoods across the U.S., the company has altered the rules for posting. When a user wants to post about a crime or suspicious activity, in the Crime & Safety section, a new form requires two physical descriptors — e.g. Nike sneakers, gray sweat pants, bald — if the user chooses to include the race of the person."

An algorithm under development spot-checks the summary of the suspicious activity for racially charged terms, as well as for length. If the description is too short, it is presumed to lack meaningful detail and is unacceptable.

If a draft post violates the algorithm's rules or the form's mandatory fields, the user has to revise. Otherwise, it's not possible to post. All 112,000 U.S. communities have been sent the new regulations.

The move to block posts sparked heated internal debate, Tolia admits. "It's highly unusual for a social network to say: If you don't do this, you cannot post. Highly unusual. I mean, think about Twitter or Facebook or Snapchat. There's no friction at all in the process of posting."

In tech, "friction" is a dirty word. Engineers rack their brains over how to shave seconds off the time it takes to broadcast your post to the world.

Nextdoor recruits police and city agencies into the network as an added feature, a kind of Community Policing 2.0 that many users want. In the wake of the Dallas shootings, the police department there turned to Nextdoor to communicate safety updates to residents, and later to recruit for the police force. The network says it's partnering with more than 1,600 public agencies in the U.S.

How many people do you know in your immediate neighborhood? This is a way to find recommended suppliers and services, to keep track of things-both good and bad going on in the community and best of all ... to bring people together.