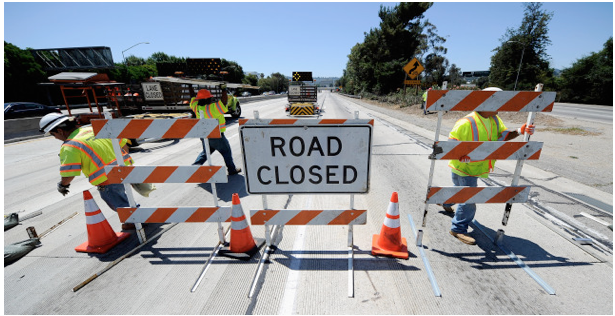 ALPERN AT LARGE--No need to mince words here:  if the state did its job on transportation funding, then Metro wouldn't have to keep raising its county sales tax every few years.   Sacramento, when it comes to stealing and misappropriating transportation funding, you stink ... and you ought to be ashamed.  And now there's a bill (SB1379) to have Sacramento play a direct role in choosing the Metro Board?!

There's a darned good reason why the Metro Board had to take over the last portions of the 405 widening project through the Sepulveda Pass:  Sacramento was broke and spending money on other things ... did you know we spend as much or more on former state workers as current state workers?

But whatever ... no one other than the nerds even read or care about that "pension" thing.

And past governors kept offering and then taking away money for the Expo Line and other major Metro projects--seriously, if we didn't have Measure R passed, it's anyone's guess when we'd have an Expo Line or Crenshaw/LAX line...and there would be nothing left for any other projects.

Freeways really should be under the largesse of the state, and major rail lines (the latter of which, if you think about it, are freeway-alternatives or freeway-supplements) should be a combined state/local project with respect to planning and funding.

Meanwhile, while this governor spends more time shoving a high-speed rail line down the throats of an ambivalent taxpaying public (tens of billions of dollars here, folks) without getting airlines, the private sector, and Amtrak on board, the lion's share of getting the light and heavy rails to our major LA City/County destinations has been the responsibility of the county.

You know, the supes.  The five elected kings and queens of LA County.  There are four Metro seats for the Mayor, and seats allotted to different geographic regions of the county.

Balance and fighting is always tough when fighting for projects and money, but after years of infighting we passed Measure R, and if we pass Measure M (also known as Measure R-2) this November, we won't have to agonize over freeway and rail access to the ports versus LAX light rail access versus the Wilshire Subway or the Sepulveda Pass Subway versus ...

Our past mayor set the groundwork for LAX reconfiguration and getting the light rail to LAX, but it's been Mayor Garcetti and Westside City Councilmember Bonin who've worked with the right people to finish the job while also FIIIIIIIIIINALLY (!) allowing LAX renovation/reconfiguration without smashing into Westchester, and cutting off Lincoln and Sepulveda Boulevards. as well as future rail line extensions.

Unfortunately, the past mayor also infuriated the southern and eastern portions of the county with respect to Measure R spending, and focused so much on the Wilshire Subway that eastern and southern rail lines appeared to be getting the short end of the stick.

So enter Senate Bill 1379, sponsored by Senator Tony Mendoza (D-Artesia), which would maintain 4 seats on the Metro Board, but only have two county seats for the Metro Board while replacing the three others with a seat for Long Beach, as well as an appointee by the president pro tempore of the Senate and the speaker of the Assembly.

Most of you reading this would want to respond with a "slow jam" of the following: "THE STATE WOULD SUPPLANT COUNTY GOVERNANCE OF A COUNTY ENTITY WITH STATE APPOINTEES".

I'm not sure if the "D" in D-Artesia stands for Democrat, Dum-Dum, or Delusional, but if this is the best that Mr. Mendoza can do to ensure equity between the west and east halves of the county with respect to transportation funding, then maybe he should find a new hobby.

The late Bill Rosendahl felt that Measure R should have been a full penny to get the job done, and that means a Gold Line to the San Bernardino County Line and to the full Eastside, a Green Line to the South Bay, and a light rail line to the Southeast Cities as well as the obvious north/south and east/west rail lines for the LA County urban core and LAX.

Ditto for our roads and freeways, and for operational expenses.

We're getting the job done, Mr. Mendoza, and both the Mayor and the County pols are getting along better than they've gotten along in decades.  Washington realizes that LA is a heckuva good partner in transportation spending.

But the same is not true for Sacramento.  That entity really owes us tens of billions of dollars for our roads and rails and other transportation needs.

So let's just hope that SB 1379 is just a misguided shot in the dark by a Sacramento that truly has been asleep at the switch for a very, very long time with respect to transportation.

A simple note to Sacramento: don't give us lame, sophomoric governance bills.  If you really want to help, spend a few billion a year on city/county directed needs.  After all, that really IS the sort of thing that taxpayers expect their state taxes to go to, rather than to have to pay it again to the counties because Sacramento spent transportation money ... somewhere ... else