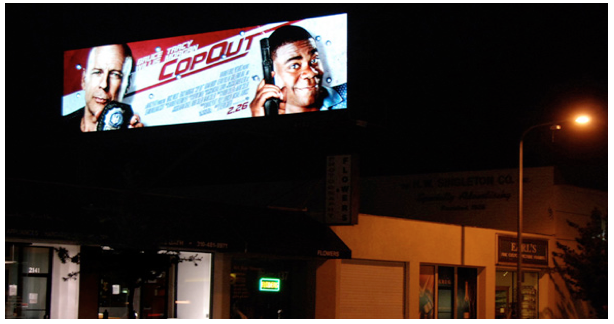 BILLBOARD WATCH-Will this digital billboard re-appear? In this location, or elsewhere? The photo is from 2010. But new digital billboards are going to start popping up along LA’s streets and freeways, probably sooner than later. The only questions are exactly where these brightly-lighted signs with rapidly-changing ads will appear, and how many will ultimately brighten the landscape with their shiny sales pitches to motorists, cyclists, and pedestrians on those congested thoroughfares.

That’s a prediction, not a fact. But it’s based on close observation of the saga that began when the city banned those billboards fourteen years ago, a convoluted epic involving lawsuits and threats of lawsuits, multiple rewritings of the city sign ordinance, numerous public meetings, and a lobbying and public relations campaign by Clear Channel and other big billboard companies that resembled, in its expense and relentlessness, a military exercise designed to batter down City Hall walls and turn politicians into willing and even enthusiastic allies.

The latest chapter opens tomorrow, when the City Council’s PLUM committee takes up a proposal to allow 150 new digital billboards in exchange for taking down existing static billboards, providing community benefits, and sharing part of the considerable revenue generated by the signs. That’s it in a nutshell, although a lot of details would remain to be worked out, mostly to do with questions of quantity -- how many billboards taken down, how many streetscape improvements or pieces of public art or other community benefits, how much revenue.

Certain numbers are floated in an 11-page joint report from the city’s planning department, the chief legislative analyst, the chief administrative officer, and the department of building and safety. One is a sign reduction of 8 to 1, based on square footage. In other words, if a full-size digital billboard were to be erected, Clear Channel or other company owning the sign would have to take down eight of equivalent size. And half of those billboards would have to be taken down within a five-mile radius of the new digital sign.

But how can this happen without lifting the aforementioned 2002 ban on new billboards (defined by code as off-site signs) and any modifications to existing ones -- which, presumably, would open the floodgates to new billboards and other forms of outdoor advertising all over the city.

The mechanism proposed by city officials and touted by Clear Channel ever since the court ordered their digital billboards turned off in 2013, is the relocation agreement. Put simply, California law allows cities to enter into an agreement with a billboard owner to remove a billboard and put up a new one of equivalent size elsewhere. This law was intended to relieve cities and other jurisdictions from paying compensation for billboards needing to be removed for street widenings and other public works projects, and it would -- presuming again -- allow LA’s off-site sign ban to remain intact.

After the city settled a lawsuit back in 2006 by allowing Clear Channel and CBS Outdoor (now Outfront Media) to convert 840 of their billboards to digital, the companies got 101 of the new billboards operating before public outcry lifted to such a pitch that the City Council slapped on a moratorium and then a permanent ban on the signs. A lawsuit by a smaller billboard company then resulted in a court ruling that the city’s lawsuit settlement was illegal and that the digital billboards had to be shut off.

Those digital billboards had been put up without any public notice or restrictions on location and proximity to residences. City planners and other officials obviously learned something from the debacle, because the proposal to be considered by the PLUM committee includes a number of restrictions apparently designed to lessen the impact of digital signs.

Among the most noteworthy are prohibitions of the signs in areas zoned neighborhood or limited commercial, which typically have small shops and neighborhood businesses; in public parks, historic preservation zones, and along designated scenic highways; and areas within 500 ft. of single family zones.

Still, this is a major departure from action of the City Planning Commission, first back in 2009 and again in 2015, which restricted any new off-site signs, including digital billboards, to 22 high-intensity commercial areas including downtown, Universal City, Warner Center, Mid-Wilshire, and others. That restriction, however, has been strenuously opposed by Clear Channel and other members of the billboard industry, and it became clear earlier this year that despite the support of numerous individuals, neighborhood councils, and community groups, the five-member PLUM committee was going to turn a collective thumbs down.

Another unknown is whether new “relocated” digital billboards will be allowed on both private and public property, as vigorously promoted by the major billboard companies, or only on public property, as put forward in a proposal last year by City Councilman Paul Krekorian. Those companies -- Clear Channel, Outfront Media, and Lamar Advertising -- have vigorously enlisted the support of business groups, labor unions, and non-profit organizations in their push to allow the billboards on both private and public property, so the smart money is probably on that arrangement.

Still, many questions remain. For instance, will a small billboard company like Regency Outdoor or Summit Media be interested in removing eight of its existing billboards just to get one digital sign? What about Lamar Advertising’s inventory, which consists predominately of small signs in less affluent neighborhoods? Would it want to put up all its new digital billboards in communities miles away where eyeballs are more coveted by advertisers? And what about Clear Channel’s and Outfront’s digital billboards that have been sitting dark for three years? Many of these signs generated complaints about light flashing in windows, possible distractions to drivers, and so forth. Do the companies want to turn a bunch of those back on?

And perhaps most importantly, what is the legal significance of these proposals? The highly litigious billboard industry, as well as other outdoor advertising companies, have sued the city repeatedly in the past, all attacking in one way or another that nefarious 2002 ban on new off-site signs. The sign district restriction adopted by the City Planning Commission was originally touted as a way to allow off-site signs without opening up the ban to legal attack.

Any digital billboard scheme the PLUM committee stamps with its imprimatur will have to be put in ordinance form by the City Attorney’s office, which-- presuming yet again -- means that some light will be shed on possible legal pitfalls.

(Dennis Hathaway is the president of the Ban Billboard Blight Coalition and a CityWatch contributor. He can be reached at: Dennis@banbillboardblight.org.) Prepped for CityWatch by Linda Abrams.