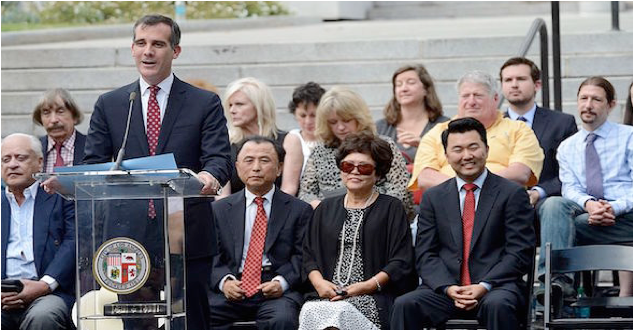 TRUTHDIG-Amid Donald Trump’s vicious attacks on immigrants, it’s refreshing to take a look at Asian-Americans, who braved great hardship to come to the United States. In the face of racism, they began life in a hostile land, raised families and have made a significant contribution to the nation’s social, intellectual, economic and political life. (Photo above: Mayor Eric Garcetti at podium, Councilman David Ryu front row right.)

I’ve been intrigued by their lives, which mirror the experiences of other Americans of immigrant stock. I’ve watched the transformation of the Asian-American community from powerlessness to political office and clout. From my perch in Los Angeles and its suburbs that surround the city, I got to know a lot of the people who made it happen. Theirs is a great American story, one that offers hope in a time of gloom and cynicism.

But first some numbers to put this in perspective. More than 18 million Asian-Americans live in the United States, more than 5.5 percent of the population. Chinese comprise the largest group, more than 4 million, followed by Filipinos, Indians, Vietnamese, Koreans and Japanese. They are the fastest-growing ethnic minority and are expected to play an increasingly important role in elections.

There were many turning points in the history of Asian immigrants to the United States. All of the immigrant groups treasure theirs. To record them all would fill a book. This is just a column, so I’ll write about the ones I saw.

The Korean-American moments of history are the most recent. An important one was the wrongful conviction of Chol Soo Lee, a Korean immigrant accused of a 1973 murder involving Chinese-American gangs in San Francisco’s Chinatown. A Korean-born journalist, K.W. Lee, then with the Sacramento Union, investigated the case. K.W., as everyone knows him, was the first Asian immigrant to work as a journalist on an American newspaper, starting out on the Kingsport Times-News in Tennessee. It took him more than 100 stories and five years before Chol Soo Lee was retried and acquitted. During this time, K.W. helped organize a grass-roots campaign by Asian-Americans, the Free Chol Soo Lee Defense Committee, one of the first Pan-Asian justice defense organizations.

I met K.W. while he was editor of the English-language edition of The Korea Times.   He was my gracious teacher and guide through Koreatown in the months preceding, during and after the biggest turning point for the Korean-American community, the 1992 Los Angeles riots.  It devastated Korean businesses and was forevermore known in the community as Sa-I-Gu, Korean for 4-2-9, the day in 1992 the riots began.

Los Angeles City Councilman David Ryu, (see photo above.) then a teenager, remembers the helplessness felt by Korean-Americans. He was one of the young Korean-Americans inspired by K.W. to become a community activist.

Ryu was elected in 2015 in a historic demonstration of growing Korean-American power, beating a candidate backed by the City Hall establishment. He immigrated to the United States at age 5 with his parents. “The family was on food stamps,” he recalled. “There were six of us in a two-bedroom, 700-square foot apartment.”

Ryu was in the 11th grade when the riots began after a jury in suburban, mostly white, Simi Valley acquitted the white Los Angeles Police Department officers of the videotaped beating of Rodney King, an African-American who had been stopped for a traffic violation.

The riots were a multiethnic event for a multiethnic city. African-Americans in South Los Angeles began looting and burning stores. Latinos joined in. Korean-American immigrants owned many of the small grocery and liquor stores, buying them as a way to begin the climb up the U.S. economic ladder. The stores tended to be family affairs, with the parents and children working to keep them open seven days a week. Most of the adults didn’t speak English well, and relations with the African-American customers were tense, just as they had been when Jews ran those stores before the 1965 Watts riots. Flames and rioting spread north of South Los Angeles. Too often, police and firefighters were not around. Korean-Americans armed themselves, and one, an 18-year-old college freshman, was shot to death.

After watching the riots and observing people fighting fires with their garden hoses, I attended a mass meeting of several thousand Korean-Americans in a Koreatown park. People were angry, feeling they had been neglected by the city’s political and law enforcement powers.

“It showed the Korean-Americans that you just couldn’t be quiet, knowing your place. You were shooting yourself in the foot,” Ryu told me.

Younger people like him were long put down by their elders, but no longer.

“We got to speak out,” he said. “We started organizing, registering voters, [believing] we cannot let this happen again. We need access. Connections.”

There were other examples of mistreatment of the Asian-American minority by politicians and law enforcement.

Back in 1871, 17 Chinese were lynched in Los Angeles’ Chinatown in a massacre that historians found was widely supported by the town’s white powers.

All Asian-American immigrants were targeted by the 1913 California Alien Land Law, which had the effect of barring landowning by Chinese, Indian, Japanese and Korean farmers.

A governmental and political outrage of another kind spurred the political organization of the largest group of Asian-Americans, the Chinese. It began in the 1980s in Monterey Park, a small suburban city east of Los Angeles with a movement called “English only.” White merchants and politicians tried to ban Chinese-language signs from stores in a city that was becoming home to many Chinese-Americans.

That’s when I met a young member of the small Garvey School District Board, Judy Chu, who taught psychology at East Los Angeles Community College. She and others organized a coalition of Asian-Americans, Latinos and whites against English only. She was elected to the Monterey Park City Council, the state Assembly and then to Congress, where she was the first Chinese-American woman to become a member of the House. She is chair of the Asian Pacific American Caucus. English only, by the way, disappeared when Monterey Park became a majority Asian-American city.

I talked over the history with Mike Woo, dean of the College of Environmental Design at Cal Poly Pomona and the first Asian-American elected to the Los Angeles City Council. He later ran unsuccessfully for mayor.

Woo’s election is part of the history, as is an action he took as a councilman. He was the first member of the council to call for the resignation of the influential police chief Daryl Gates, whose leadership of the department was blamed for police failures to control the 1992 riots and protect residents. The action by the Chinese-American councilman created a bond with African-Americans at a time when their relationship with Asian-Americans had been bad.

Today, more than 4,000 Asian-Americans hold local, state and federal offices. In a paper published by the Center for American Progress in 2014, scholars Karthick Ramakrishnan and Farah Z. Ahmad found that the number of Asian-American voters nearly doubled from more than 2 million in 2000 to almost 4 million in 2012. They are projected to constitute 5 percent of the electorate by 2025 and 10 percent by 2044.

This should be good news for the Democrats in this presidential election year, if they can take advantage of it. Most Asian-Americans favor Democrats and don’t like anti-immigrant politicians. The biggest number of Asian-Americans live in the West, where California, Oregon and Washington are Democratic. But their numbers are increasing in Arizona and, combined with the large number of Latino Arizonans, could deliver that usually Republican state to Hillary Clinton. In Florida a small minority of Asian-Americans, centered in Orlando, could combine with Latinos and take the state away from Trump.

The rise of this immigrant community in politics and its growing participation in the political process are a refutation of Trump and his portrayal of immigrants as an alien body invading the United States.

“The trend toward Democrats by Asians will continue,” Woo told me. “It might be accentuated by what Asians see as anti-immigrant bias.”

In a close election for president, that could make the difference.