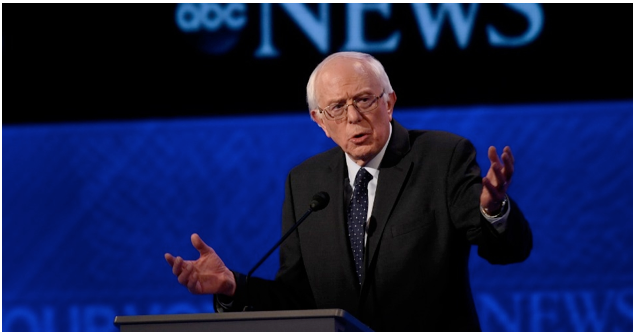 TRUMP DOUBLE’S DOWN--Donald Trump has doubled down on his challenge to debate Bernie Sanders, telling reporters in Bismarck, North Dakota on Thursday that he would agree to a one-on-one with the Vermont senator for "something over $10 million."

"If we can raise for maybe women's health issues or something, if we can raise $10 or $15 million for charity," he said. "We have had a couple of calls from the networks already and we'll see."

Sanders responded by tweeting that he was "delighted" Trump had agreed to debate.

"Let's do it in the biggest stadium possible," he wrote.

The comments come after talk show host Jimmy Kimmel asked Trump on air Wednesday if he would debate Sanders ahead of California's June 7 primary—a question submitted by Sanders himself—to which Trump responded, "If I debated him it would have such high ratings. Take that money and give it to some worthy charity."

The senator's campaign manager Jeff Weaver also told MSNBC's Andrea Mitchell that it would be "great for the American people to be able to see these two candidates on stage debating the important issues... I have to believe that this would be one of the most widely-watched debates ever in presidential politics."

Donald Trump and Bernie Sanders have seemingly agreed to a one-on-one debate ahead of California's primary on June 7—or, as Politico puts it, "the debate the world has been waiting for."

Appearing on ABC's "Jimmy Kimmel Live" on Wednesday night, Trump said he would debate Sanders if the proceeds from the event went to charity.

"If I debated him it would have such high ratings," the presumptive Republican nominee said.

"I look forward to debating Trump in California before the June 7 primary," he wrote.

Sanders' campaign spokesperson Michael Briggs added Thursday that the Vermont senator "thinks a debate is very important to California voters." The news comes shortly after Sanders' Democratic rival Hillary Clinton reneged on a promise to debate him again ahead of the state's primary, which Sanders called an "insult" to voters there.

Writing for CNBC on Thursday, news columnist Jake Novak argues such a debate would be nothing less than Hillary's Clinton's "worst nightmare":

A Donald Trump vs. Bernie Sanders debate in the coming days before the June 7th California primary is getting closer to becoming a reality. If this happens, it will likely be a huge boost for Sanders, a mild aid to Trump, and -- to borrow the key buzz word of this election so far – a YUGE pain in the neck for Hillary Clinton.

For Sanders, this entire election has been a "nothing to lose" proposition. He was given no chance to even make a dent in Mrs. Clinton's inevitable coronation, er presidential nomination, by the Democrats. And as a lifetime Senate backbencher, he was not in danger of losing a chairmanship or leadership position. While it's basically impossible for Sanders to overtake Clinton in the delegate battle, the latest PPIC poll shows Sanders trails her by just two percentage points among likely California primary voters.

As of Thursday morning, no formal debate between Trump and Sanders had been arranged. However, Politico notes that Sanders is scheduled to appear on Kimmel's show Thursday night.

(Nadia Prupis writes for Common Dreams… where this was first posted.)