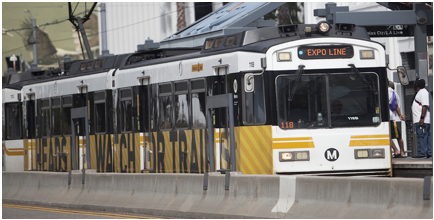 GETTING THERE FROM HERE--On May 20th, history will be made in Los Angeles with the opening of the second phase of the Expo Line from Culver City to Santa Monica.  In theory, this line, dubbed the "Aqua Line" by those who advocated for it, is one of the greatest victories of grassroots activism in our modern era ... but while Metro deserves kudos for keeping close to the grassroots, it has the potential to be undermined by the same forces that made LA County such a traffic-laden hellhole in the first place.

First things first: I am truly honored to have been part of the Friends4Expo Transit (F4ET) team, and in its innermost circle, for the decade or so (2000-2012) I fought for it.  Yes, there were battles beyond that, but the big decisions were in our collective rear-view mirror but that time, and the Expo Line was a fait accompli.  Being part of grassroots activism like F4ET will be one of my life's most cherished efforts.

And to people like Darrell Clarke, Russ Davies, Kathy and Jim Seal, Julia Maher, Faith and Pressley Burroughs, Bart Reed, Jonathan Weiss, Karen Leonard, Sarah Hayes, Annette Mercer, and a host of others who "jumped on board" that train to connecting Downtown to the Mid-City to the Westside, it really WAS a "Friends" movement--it's doubtful they'll ever get the credit for the sacrifices and slander they encountered along the way.

We all meant well, and wanted an extra option to the I-10 freeway traffic and wanted to bring the different geographic, socioeconomic, and ethnic regions between the Downtown and the beach together.  I'll go out on a limb and suggest that we either played a role, and/or were the result of, improving racial and socioeconomic relations after the LA riots of 1992 which was a huge factor in shutting down the Wilshire Subway effort.

What we did NOT expect (well, maybe we should have expected it), was the stubborn and entrenched (but very empowered ... WAY too empowered) minority of individuals who had a lot to gain with respect to their egos and political status by fighting the line for racial reasons ... and speaking ONLY for myself, I was appalled to see both black and white "community leaders" use the race card to fight this line.

By and large, most everyone--black, white, Latino, and Asian--saw this line as a no-brainer.  The I-10 freeway is horrible, and people need another option.  End of story.

Unfortunately, and in part thanks to the host of legal and community efforts to stop this line, and in particular to place this line underground everywhere from USC to Dorsey High School to Cheviot Hills/Rancho Park, it's now a lot slower than it could have been had those fighting (and really misleading their neighbors!) the line figured out that:

1) This is a line that has a cap on ridership because it shares the tracks with the Blue Line in the Downtown area, so only so many trains each day could run on it.

2) If a grade separation was needed, and the choice was between a $30-$40 million bridge, a $300 million underground tunnel, or at street level, then DEMANDING the tunnel would inevitably lead to a street level solution.

Oh well, so it'll be 50 minutes from one end to the other, but not everyone goes that far, and it's almost certain that there will be signal modifications and operational modifications along the way to make it faster--and during rush hour, it's by far better than the I-10 ... at least with respect to traffic.

Other issues to be fixed include insufficient parking and an imbalance to bikes and "alternative transportation" that really hurts car commuters (who want to access the line, and/or access the pedestrian venues nearby), as well as an overdevelopment craze that treats this limited light rail line as if it were the Wilshire Subway.

The Expo Line is a light rail line that will carry 80,000-100,000 riders a day, while the Wilshire Subway is meant to carry 300,00 or more riders a day.  For the City of LA to re-zone Pico Blvd. on the Westside, or anywhere else along the line, the way it is trying very very hard to do, and in a manner against the wishes of the grassroots activists who fought the line, truly undoes the good will that Metro and the grassroots have worked so hard to fight.

So whither Los Angeles mass transit?  Will the Crenshaw/LAX Line be a success story about redeveloping Crenshaw Blvd. and allowing a Mid-City to Westside to South Bay line to develop?  Will the political leaders highlight this line as the first step to both a LAX link as well as a "Phase 1" that cries out for both a "Phase 2" to the north and a "Phase 3" to Downtown as we see with the Expo Line.

Mass transit is, indeed, in transit in the City and County of Los Angeles, and for it to succeed in the 21st Century it will ... as with the Expo Line ... need to listen to the grassroots.

After all, it is the grassroots and taxpayers that are being asked to pay for it, right?