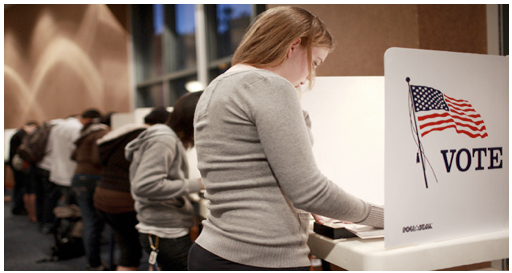 MY TURN-I don't know about you but the election cycle this year seems interminable. I think we are the only industrialized nation that has an almost two year pre-election cycle. Add to this the fact that in LA we are also in the middle of Neighborhood Council (NC) elections. And they have caused a controversy all of their own. (Photo above: Westwood Neighborhood Council voting booths.)

Of course, this year is a little different from other NC election years. Like our national elections they have their own set of candidates, voters, complainers, winners and those who are crying foul for a variety of reasons.

There were some large organizational changes this year. How the outcome will be judged depends on who you talk to. Only part of the San Fernando Valley has concluded its elections; the rest will continue in other parts of the City each week until May.

Welcome to the Twenty-first Century. For the first time, online voting has been available for those NCs that were willing to be the pioneers. Thirty-two out of the ninety-six neighborhood councils decided to be part of the experiment. We won't know the results until the election cycle is over.

The Department of Neighborhood Empowerment (EmpowerLA), under General Manager, Grayce Liu, spent almost a year investigating ways to make the election system more efficient. They hired city activist Jay Handal as Election Manager whose job has been to focus on nothing but making the elections work. Previous elections had been part of the EmpowerLA’s staff duties on top of everything else. They had an impossible workload.

Handal hired election supervisors for each of the twelve regions. They, with input from NC Board members, developed an entire marketing plan. Some of you might have seen the bus bench advertisements in your neighborhoods. There were templates developed for all kinds of promotional materials. Previously, each NC had had to do all the promotion itself.

Here's where it becomes complex. Right now our Presidential primary elections are taking up all the oxygen with a complicated process in which some states have open primaries, closed primaries, caucuses, and other methods of delegate selection. Likewise, the NCs all have different bylaws governing their elected Boards. For anyone trying to be somewhat efficient, as well as fair, it is a nightmare!

Voter identification seems to be one of the biggest problems. Some NCs require what they call "self-affirmation," similar to our regular elections. You go to your polling place, sign a document that you are eligible to vote, get your ballot and go on your way. Others have what is called "documentation" -- and that is where the system breaks down.

When the system was devised, it was impossible to anticipate all of the circumstances that could occur. Each NC developed its own by-laws covering many things, including the structure of its board and how it would be elected.

Some NCs have eleven different ballots and the voters are restricted to voting for only candidates in their specific categories. As an example, a business owner in his NC could only vote for the candidates allocated “commercial seats.” Only stakeholders are allowed to vote, but the definition of a "stakeholder” has been redefined several times.

Now, the definition states a stakeholder eligible to vote is anyone who lives, works, owns property or has a continuing long-term organizational interest (kids attend school, family belongs to Church etc.)

This came about because of what was called the "drive-by" voters who claimed eligibility because they bought coffee at Starbucks daily. On a more serious note, it precluded developers from sending temporary workers on a construction project to vote in the NC election for the candidates the developer believed would be more amenable to his projects.

It was also used to keep the "old guard" from having election competition.

This is reminiscent of the way certain States have legislated "voter ID" laws, demanding voters have several different kinds of ID in order to vote. One would think that voting should be made easier. After all, we want big turnouts, right? I guess the adage, “be careful what you wish for" -- in other words, we want large turnouts but are they always desirable? The Republican Party is enjoying record turnouts but not exactly with the outcome they desire.

I have observed that having these types of restrictions doesn't encourage involvement...it chases people away.

On the subject of elections, I attended a gathering of people discussing "Why You Vote the Way You Do,” facilitated by Leon Williams of Sherman Oaks, who has been holding Salons for the past twenty-five years. wice a month he has different speakers come and attend his "Conversations with Leon.” I asked the question, "Do you know who is running for office locally?" I followed that up with, "Do any of you attend your Neighborhood Council Meetings?”

After all, these were intelligent, informed people who obviously cared enough to come out on a rainy evening and discuss politics. Only one person knew the name of his Councilmember. Another couple mentioned that they had tried to volunteer for their local NC but apparently the Board was not terribly welcoming.

I am curious if the online voting system will be successful. Some States have already incorporated it into their election process. California, with only one Tuesday election date, really needs to investigate online voting.

Handel said that some of the NCs who have experienced great turnouts have done an effective job in reaching out to their stakeholders. The NCs that have not even sent out a single mailer asking for candidates and promoting the election site have only themselves to blame for a poor turnout.

City Council President Herb Wesson placed the Neighborhood Councils under his rules committee almost a year ago. It would help if he would tackle some of the major issues affecting the operations of the Neighborhood Councils. He recently organized a task force to look at the issue of funding. Most of the people attending the first task force meeting wanted him to handle some of the other priorities as well.

The solutions are there...this is not nuclear science.