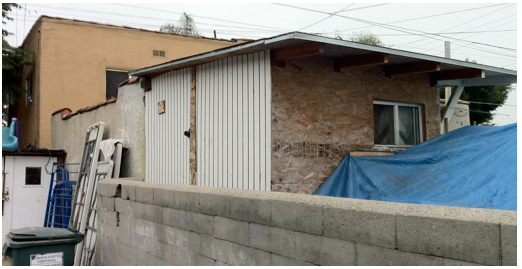 THIS IS WHAT I KNOW-There’s no question that the affordable housing crisis in LA is a major issue. Median rent grew 27 percent between 2000 and 2013 while household incomes for renters fell by 7 percent in the same period. Bootleg apartments or unpermitted rental units have formed sort of a black market economy -- until the units are discovered by housing inspections. Typically the landlord doesn’t have enough time to bring the units to compliance and in 80 percent of the cases, the tenants are evicted, which brings further challenges to the struggling renters.

Between 2010 and 2015, about 2,560 non-permitted units have been cited by City enforcement agencies and 1,765 of those have been removed. Only 201 (12%) were legalized by complying with the City’s building and zoning regulations. This has caused a net loss in the City’s housing creation.

Back in 2014, LA City Councilman Felipe Fuentes introduced motion CF 14-1150, seconded by Paul Koretz, that examines the consequences and logistics of a program that would legalize LA’s safe but unpermitted rental units. At first, the idea was supported by both tenant advocates and landlords but a new amnesty ordinance backed by the council brings far less enthusiasm from landlords. To legalize the units, the landlords must keep a specified number of units in the building affordable for a 55 year period.

Affordable housing mandates for both landlords and developers are often met with a preference to “just pay the fine” rather than lose out on income. The other issue is if the city will be able to actually enforce the ordinance.

Cities across the country, including West Hollywood and Santa Monica, have similar ordinances. The City of Santa Monica passed a law that permits owners to keep the unpermitted units as long as they meet a basic level of standards without having to meet current development standards like setback and density provisions. Parking requirements may be adjusted if the traffic engineer determines the parking situation is not feasible. Only 30 of about 484 units have actually been legalized since the passing of the ordinance, perhaps in part due to the lack of code enforcement procedures for citing illegal units, as well as the absence of a time limit. Santa Monica’s rent stabilization laws also prevent the units from being removed unless the unit is not habitable or cannot be made habitable.

Currently, the number of Angelenos who pay 50 percent or more of their incomes in rent is greater than in other cities. The problem is more pronounced for low-income renters but the housing shortage has also impacted middle- to upper-income renters, which impacts everything from traffic, air quality, jobs, and the quality of life for residents living in unsafe or overcrowded conditions.

Bootleg apartments in multi-unit buildings are constructed from converted rec rooms, storage rooms, or illegally subdivided apartments. If authorities find the unpermitted units, owners typically are given 30 days to remove the unit or legalize. However, the barrier towards legalization isn’t always building code compliance but more often planning and zoning codes, including density and parking.

One concern is that legalization could result in a rent increase or displacement without protections, which is why the council included the affordable housing mandate. The City Council recommends that renters of the unpermitted units aren’t evicted and are protected by any rent stabilization ordinances.

Motivating multi-unit building owners to convert the unpermitted units while providing affordable housing is a challenge, while maintaining a neighborhood’s livability is also a challenge. However, encouraging apartment owners to convert unpermitted bootleg apartments into viable living spaces seems to be one of the logical solutions to a significant and widespread problem.

The bootleg apartments in Los Angeles, as they exist, present problems because the city cannot verify life and safety standards or if the units are allowed under the zoning code. A successful program would allow for the preservation of safe, livable units while respecting the neighborhood character and habitability.