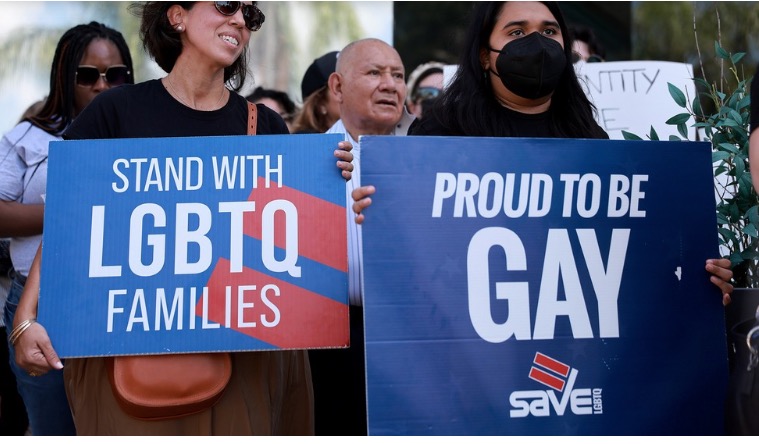 LGBTQ POLITICS - I am tired of rightwing politicians distorting our language to suit their bigoted ideology.

They have the nerve, for example, to quote Dr. Martin Luther King Jr. when he spoke at the March on Washington in 1963 and said he hoped for the day when his children would be judged by the content of their character, not the color of their skin. Dr. King was projecting a vision of a world without racism, when people would see each other as friends, neighbors, and fellow human beings.

I propose that we make a conscientious effort to reclaim the plain meaning of words.

Yes, I am WOKE. I want Dr. King’s dream someday to be true.

One of the hot-button words that has been appropriated by rightwing politicians is “woke.” They are trying to turn it into a shameful word. I looked up the definition of WOKE. It means being aware of injustice and inequality, specifically when referring to racism. I strive to be aware of injustice and inequality and racial discrimination and to do whatever I can to change things for the better. Shouldn’t we all do that?

My acronym for WOKE is “Wide Open to Knowledge and Enlightenment.”

What would you say about someone who is not WOKE? They are “asleep,” “unconscious,” “indifferent.” They are “Mind Closed, Mouth Open.”

Yes, I am WOKE. I want Dr. King’s dream someday to be true. It is not true now.

Governor Ron DeSantis of Florida believes it is terrible to be woke. He demeans those he says are woke. He claims that the woke are politically correct and are intimidated by organized efforts to reduce racism in schools and the workplace. He thinks that being woke is so dreadful that it must be made illegal.

He urged the Florida legislature to pass “anti-woke” legislation in March. And they did. The so-called STOP WOKE” Act means “Stop the Wrongs to Our Kids and Employees Act.”

This legislation is intended specifically to silence discussions and study of racism. It bans the teaching of critical race theory in schools and colleges and bans diversity training in the workplace.

Who is uncomfortable when racism is discussed? In my experience, the people who don’t want any discussion of racism are either racist or are embarrassed by their acts of racism in the past.

To protect the tender sensibilities of white people, we must avoid any discussion that makes them or their children uncomfortable. We must not take the risk that they or their children might feel uncomfortable for terrible things that happened long ago. So don’t talk about them. Don’t read books that discuss slavery, as the Ku Klux Klan, lynchings, or segregation. Don’t mention the distant past, [email protected] Don’t dare to talk about discrimination against black people, or the passage of laws that impair their right to vote, or the persistence of racially segregated schools.

Not only is it wrong to be woke, in the eyes of those who prefer to stifle all recognition of racial discrimination, it is absolutely forbidden for teachers or professors to examine the causes of racism and its persistence today in our laws and policies. Making a conscientious effort to understand the causes of racism and to seek remedies is called “critical race theory” (CRT).

The attacks on critical race theory are intended to intimidate teachers and to prevent students from learning about racism, past or present.

In states that have banned the teaching of critical race theory, the legislators can’t define CRT, so they make it illegal to teach “divisive concepts” or anything that makes some students “uncomfortable.”

When a white supremacist massacred ten Black people in Buffalo, New York, teachers in anti-CRT states were not sure if they were allowed to teach about what happened. Would they lose their jobs if they taught the truth?

The states that prohibit the teaching of critical race theory are banning the teaching of honest history, for fear that someone might be uncomfortable when they learn the facts about what was done to Black people in our history. Some states have explicitly banned Nikole Hannah-Jones’ “The 1619 Project,” because it might make some white people uncomfortable. I may be wrong, but I can’t recall a state that ever passed a law censoring a single book. This book is obviously very powerful and very frightening to those who feel the need to ban it. It cannot be refuted by the DeSantis faction so it must be banned.

Like the STOP WOKE law, the “Don’t Say Gay” law is vague, which makes teachers fearful of teaching anything related to gender or sexuality. If schools can’t teach about gender identity, then they cannot teach about married couples of any gender. If you take them literally, you should not refer to Moms and Dads, men and women. Dare we teach young children about heterosexuality? Apparently not, if you follow the letter of the law.

The groups that are behind these attacks are familiar to us. They are Moms for Liberty, Moms for America, Parents Defending Freedom, and a bevy of other groups funded by rightwing billionaires.

Not coincidentally, these are the same groups that are fighting to pass funding for charter schools and vouchers.

What is their motive? They want to destroy not only freedom of thought but public schools.

Recently, I watched the far-right provocateur Chris Rufo give a speech at Hillsdale College. He called on his audience in a speech titled “Laying Siege to the Institutions.” (Please watch it). Rufo claims credit for making CRT a national issue. He boasts that a few years ago, CRT had virtually no public recognition. Thanks to his lies and distortions, most people have heard of it and some think it is a radical, Marxist plot to destroy America by turning race against race. Because he says so.

For the past four decades, CRT was known as a law school study of the origins of systemic racism and the extent to which it is embedded in our laws and institutions. Its founder was Derrick Bell of Harvard Law School. He was a friend of mine. He was not a Marxist or a radical. He was a great American who wanted America to live up to its promises. Unlike Rufo, he didn’t believe in gag orders and bans. He believed in study, scholarship, debate and discussion.

Chris Rufo offers one solution to all the problems he sees: school choice.

To him, the public school is the most dangerous of all institutions, because it teaches equality, justice, and critical thinking. It teaches students to respect others. It teaches them to abhor racism and other forms of bigotry. It teaches students about American history without censoring the unpleasant and horrifying parts. The laws passed to ban CRT and to gag teachers have one purpose: Teach lies, not honest history.

Here is what I suggest.

Fight privatization of our public assets.

Think about it. Discuss and debate the issues.

Stand up to the craven politicians who attack your freedoms.

Vote against them when you have the chance.

Work towards the day when we treat each other with respect.

(Diane Ravitch is a historian of education at New York University. Her most recent book is "Reign of Error: The Hoax of the Privatization Movement and the Danger to America's Public Schools."  This story was featured in Common Dreams.)