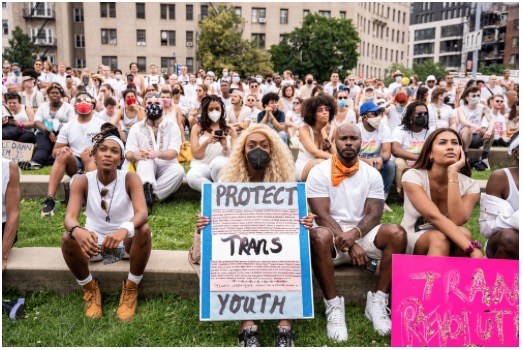 These bills threaten to ban everything from medical care to even acknowledging the existence of trans people in the classroom. Many threaten parents and medical providers with prosecution. And all of them put the lives of young trans people at risk.

If these laws had been passed when I was transitioning, I might not be alive today.

As a trans student in middle school, I was dehumanized. I endured harassment, abuse, and physical violence for which I was the one punished. Even worse, my school responded to my coming out with harmful new policies.

For example, I was banned from the bathrooms. Instead of using the girls’ room near my classrooms, I had to go down two flights of stairs, across an open courtyard, into another school building, and all the way to the end of another building to use the nurse’s office bathroom.

This took so long that teachers began denying me permission to even go.

This kind of treatment takes a terrible toll. A national survey by the Trevor Project found that 42 percent of youth who identified as LGBTQI+ contemplated suicide in 2020 — a figure that rose to 52 percent for trans kids in particular.

What made the difference for me was getting age-appropriate, gender-affirming care.

That’s exactly what all the major medical associations agree should be the standard of care for trans and non-binary children. Studiesare also clear that with the support of families and schools and communities, the rates of suicide and suicidal ideations among LGBTQI+ children decrease dramatically.

Unfortunately, a third of trans young people — my peers — face losing access to this care because of these terrible new proposals.

As of this spring, at least 15 Republican-led states had enacted or were considering laws that   ban gender-affirming care for people under 18. (In Alabama, North Carolina, and Oklahoma, lawmakers are trying to restrict it even for 18-20 year-olds.)

These bills openly endorse harmful discrimination, including banning trans kids from public restrooms and school sports, and prohibiting them from listing their gender identity on vital personal records like driver’s licenses and birth certificates.

Disturbingly, at least 10 of these states would deputize our neighbors and the general public to report doctors who give trans patients proper medical care, or children who openly identify as trans at school.

And most draconian of all, some of these bills threaten medical providers, parents, and caregivers of trans children with felonies.

A bill that passed the Idaho House would sentence medical providers who offered gender-affirming care to life in prison. It would even prohibit parents from taking their kids out of state to get care.

Being trans is both joyful and painful. The joy comes from finally being seen for who we’ve always known ourselves to be. The pain comes from others misunderstanding and denying our identities — especially when this ignorance becomes legislation trying to erase us.

The infamous “Don’t Say Gay” law in Florida prohibits even talking, in age-appropriate ways, about different gender identities and sexual orientations. A dozen more states are working on emulating this dangerous, homophobic, and transphobic law.

All of these bills put LGBTQI+ families at risk. They put big red bullseyes on the backs of children, families, educators, and medical professionals — and they encourage everyone else to fire.

To learn more about these dangerous bills and how you can protect the lives of LGBTQI+ children, join organizations like the National Transgender Law Center, the National Center for Lesbian Rights, the Human Rights Campaign, and the National Black Justice Coalition to see what you can do.

Everyone deserves the rights afforded to us as human beings. Especially children.

(Sage Dolan-Sandrino, 21, is a changemaker, creator, and director. This op-ed was distributed by OtherWords.org.)