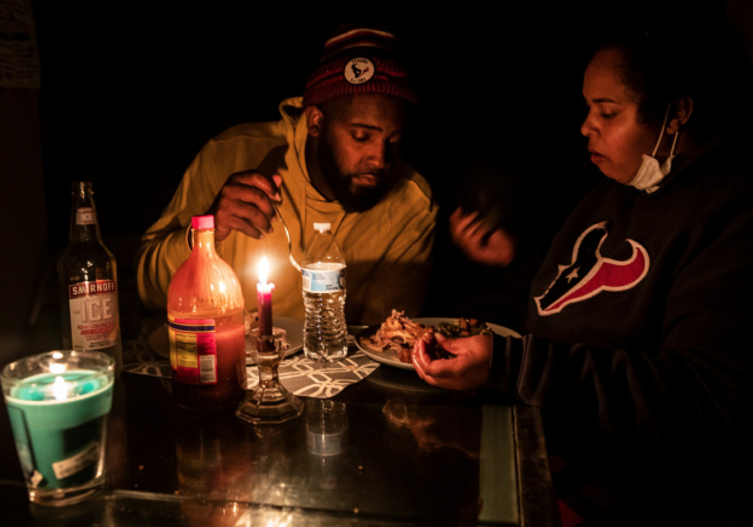 MEDIA WATCH--As Texas reels under a historic polar vortex that's left millions without heat or power and at least 23 dead, GOP state leaders have responded with their usual grace and logic, feverishly blaming their own catastrophic failures on wind turbines, Democrats, socialism, federal regulation, "corrupt 'green' policies that leave us in the dark" and anything else that isn't them. In harrowing stories, residents describe a once-in-a lifetime "classic cascade failure" as the storm hit and stayed, from miscalculations by power grid operators to unprecedented winter demand to plunging temps: "Then it froze.

The whole state in one night." Experts say the cold has ravaged an out-of-date, fossil-fuel-based energy infrastructure, for years deliberately de-regulated and privatized in the name of profits for a few, in a state run 80% by natural gas, coal and nuclear power.

"Texas is a gas state," says one expert, "and gas is failing in the most spectacular fashion right now." Those inconvenient truths haven't stopped Texas GOP politicians from rushing in to lay blame for the crisis on the usual improbable suspects. Gov. Greg Abbot took time out of his busy schedule of posting redneck jokes to go on Hannity and condemn wind turbines - which provide  maybe 10% of the state's power - and the looming specter of a Green New Deal, thus proving that in a climate crisis, as in a pandemic, he can't "lead (his) way out of a shoebox."

Rick Perry, never the brightest light in the shoebox, yammered that by God Texans should be happy to endure a few days of freezing blackouts just to "keep the federal government out of their business,” though there was no comment from those enduring freezing blackouts. Among those blaming California, socialists, Jewish lasers etc was classy Rep. Dan Crenshaw, "one of the Trumpiest grifters extant," who was busy touting nuclear power, fighting the culture wars and mocking other states' disasters: "Alexa, show me what happens when you let Democrats control energy policy."

Still, one tough-guy Texas mayor went a mind-blowing, victim-blaming step further. Colorado City's Tim Boyd took to Facebook to harangue his roughly 4,000 beleaguered constituents for being losers to expect "handouts" from "socialism - ie government and company services they pay for.

"No one owes you are (sic) your family anything; nor is it (the) government's responsibility to support you during trying times like this!" he shrieked. "Sink or swim it’s your choice! The City and County, along with power providers or any other service owes you NOTHING!" Arguing "God has given us the tools to support ourselves," he urged those without power to "step up and come up with a game plan to keep your family warm," or without water to "think outside of the box to survive"; if they don't, "your lazy as a direct result of your raising!" Bottom line: "Only the strong will survive and the weak will parish (sic)."

When the backlash started, he deleted the post and wrote another: "Taken out of context," stop harassing his wife, he should have "been more descriptive," oh yeah and he resigned. Signed, "Tim Boyd (citizen)."

On Gizmodo, his rant prompted fierce debate about the very notion of society, also some Scriptures: "For rulers are not a terror to good works, but to the evil." The key question: "Why is this guy in government if he literally thinks government’s job is to not do anything?"

Matt  Novak: "The core, fundamental purpose of society and government is to keep *everyone* safe.

To keep the fire warm and the wolves at bay. Because we have found that making life better for all means that if there is a time in our lives when things are not great, we get help....May his fire be small, and the wolves near."

Followed by, "When the snow falls and the winter winds blow, the lone wolf dies while the pack survives. - Sean Bean Stark." Followed by, from saltedgailthesnail, "I hope rabid weasels attack his genitals. - Me."