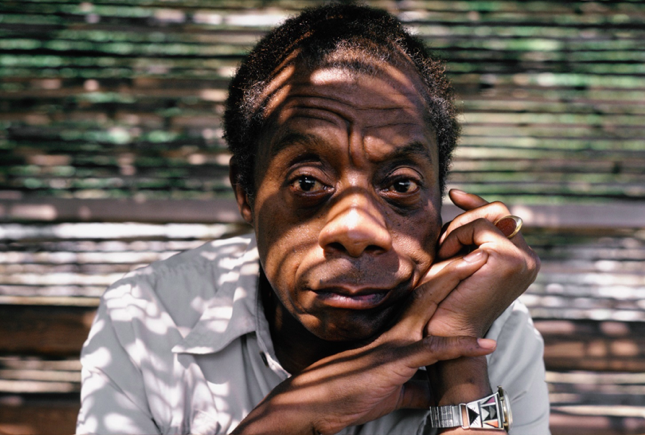 MEDIA WATCH-Very little about America surprises Black people. We are only startled by things that happen, never by the potential for things to happen. When Trump supporters attacked the Capitol on January 6, Black people collectively checked our watches, muttering, “Oh, is today when that’s going down? Guess we’re not going south of Massachusetts Ave. today.” Shocked, but not surprised. (Photo above: James Baldwin at home in Saint Paul de Vence, France in September 1985. Photo: Ulf Andersen/Getty Images.)

By contrast, White America’s reaction to the attack on Capitol Hill was marked with unadulterated surprise, as if it truly did not know itself, as if Sam Cooke did not mention it in the very first line of “Wonderful World” (which I know for a fact is a song White people like very much). Mainstream media seemed overcome with shock and revulsion. Politicians everywhere crossed their chests, shocked at what America had “become.” As if violent and entitled were not things America has always been.

Black people have to know America because America is an amnesiac with a gun. It does not put a premium on learning from its past. An educated public is harder to manipulate, and so history isn’t something America holds in high esteem. But Black people have a different relationship to America’s history: The further back you go, the more demonstrably perilous our condition becomes. And because Black people don’t want to go back to the days when the public execution of Black people was so common as to be mundane, we are constantly telling America about itself.

I wish I could say we offer such insight because Black people are striving for a better republic by way of our amazing adherence to the idea of citizenship. That would be a lie. We tell America about itself for the same reason we make time to know how it moves: survival.

Citizenship is a confounding concept in America, in that it has never truly taken root as a social reality. It’s always been more of a stretch goal than an across-the-board achievement. Our society simply has yet to pull it off in a way that doesn’t make our borders look like death camps, that doesn’t treat Black people like they’re second-class citizens.

Black folks have spent the past 400 years writing, dancing, singing, preaching, rapping, teaching, cajoling, shucking, bestselling, filming, painting, and sautéing what we know about America to Americans. Some of that was intentional, some of it was a side effect of our self-preservation, but the lessons remain.

Even the language I use to talk about citizenship comes with qualifiers. “Our society” is a phrase that would have gotten a Black person killed in 1720, run out of town in 1820, had their home firebombed in 1920, and into a harrowing argument on the internet in 2020. Black people are nothing if not pragmatic when it comes to American expectation, and the way we talk about it reflects that. So, instead of “our country,” we say things like “my house” and “our property.” For most of us, our faith in America extends to things that we can prove. Black citizenship is a fair-weather religion, and so our hymns speak of things that we can lay obvious claims to if it comes down to a gunfight. If that sounds hyperbolic, ask Kenneth Walker, who allegedly put a hot one into Louisville Metro Police Officer Jonathan Mattingly when he and three other policemen burst into Breonna Taylor’s apartment.

Not that there’s a race or anything, but it is difficult to beat Black people in a citizenship contest. Even when we aren’t allowed to be citizens, we’re awesome at it. There is always a Black person willing to break things down for people, willing to write the book or make the speech. For all our bluster about not having time to show America our receipts and all-capsing White folks to go “do their own homework,” we are glad there is a segment of our community that’s willing to take those mind-numbing hits. But let’s be clear: The reason we snap at White people for asking us to explain racism or rolled our eyes at their constant pearl-clutching throughout the Trump administration is because we have been telling America about itself for four centuries.

We have been telling America about itself since we hit the dirt. Black folks have spent the past 400 years writing, dancing, singing, preaching, rapping, teaching, cajoling, shucking, bestselling, filming, painting, and sautéing what we know about America to Americans. Some of that was intentional, some of it was a side effect of our self-preservation, but the lessons remain. When Lead Belly sang “Bourgeois Blues” in 1938, he was telling America about itself:

Who did America think Langston Hughes was talking about in his 1922 poem “Mother to Son”?

Well, son, I’ll tell you:
Life for me ain’t been no crystal stair.
It’s had tacks in it,
And splinters,
And boards torn up,
And places with no carpet on the floor —
Bare.

Nobody runs America down better than James Baldwin, but he didn’t do it to be cold. Baldwin doesn’t get enough credit for the hope infused throughout his work, hope he wished would take root in the country itself. You don’t say the stuff he did in a 1968 Esquire interview…

You know if you watched your father’s life like I watched my father’s life, as a kid much younger than I watches his father’s life; his father does work from eight to five every day and ends up with nothing. He can’t protect anything. He has nothing. As he goes to the grave, having worked his fingers to the bone for years and years and years, he still has nothing and the kid doesn’t either. But what’s worse than that is that one has begun to conclude from the fact that maybe in this Republic—judging now on the evidence of its own performance—maybe there isn’t anything. It’s easy to see on the other hand what happens to the white people who make it. And that’s not a very attractive spectacle either. I mean I’m questioning the values on which this country thinks of itself as being based.

…if you think America can’t be saved.

For all the justifiable praise that has been heaped upon Toni Morrison for coolly shrugging off the White gaze in her work to mine the interior of Black lives (proving they mattered and were worthy of such interrogation), she wasn’t above sliding in observations about the consequences of the America Condition and how it infected people:

And fantasy it was, for we were not strong, only aggressive; we were not free, merely licensed; we were not compassionate, we were polite; not good, but well behaved. We courted death in order to call ourselves brave, and hid like thieves from life. We substituted good grammar for intellect; we switched habits to simulate maturity; we rearranged lies and called it truth, seeing in the new pattern of an old idea the Revelation and the Word. —The Bluest Eye (1970)

Do I even need to dig into my rap crates here? Do I need to recount Grandmaster Melle Mel & The Furious Five’s “The Message” (1982) or N.W.A’.s protest anthem “Fuck tha Police” (1988) or the entire catalog of Public Enemy as a Black CNN? Perhaps the medicine would go down smoother if we use someone who is in White households every day, like Will Smith… or Ice-T:

Check the dates on these drags, America. None of them are recent declarations. It’s also important to point out that none of them is simply stating “America is racist and bad.” All of these examples, and countless others, are the words of an associate who believes in tough love. These are not hammers, but drills. They are the tools of actual patriots. They seek to make America consider itself, not to dismiss it altogether. And not to put too fine a point on it, but after what America has already pulled so far this year, if there is any hope of this country saving itself, this is no time to start acting brand new.

(Scott Woods is a writer. This perspective was posted most recently at medium.com.)