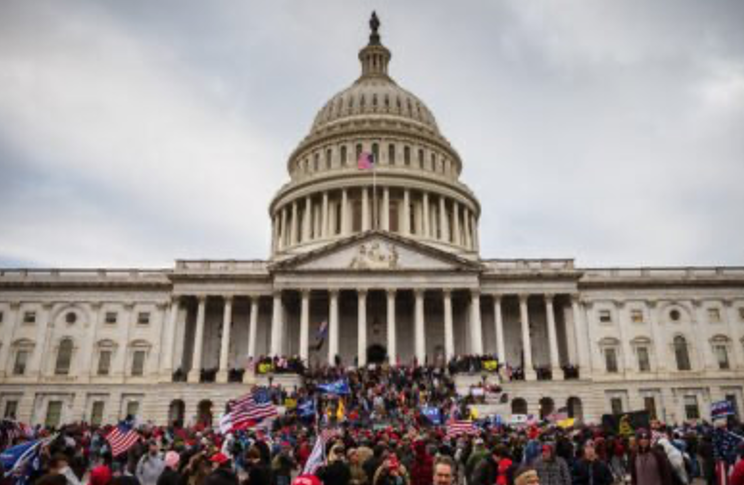 THE INSURRECTION--Hours after the attack on the Capitol ended, a group calling itself the Last Sons of Liberty posted a brief video to Parler, the social media platform, that appeared to show members of the organization directly participating in the uprising. Footage showed someone with a shaky smartphone charging past the metal barricades surrounding the building. Other clips show rioters physically battling with baton-wielding police on the white marble steps just outside the Capitol.

Before Parler went offline — its operations halted at least temporarily when Amazon refused to continue to host the network — the Last Sons posted numerous statements indicating that group members had joined the mob that swarmed the Capitol and had no regrets about the chaos and violence that unfolded on Jan. 6. The Last Sons also did some quick math: The government had suffered only one fatality, U.S. Capitol Police Officer Brian Sicknick, 42, who was reportedly bludgeoned in the head with a fire extinguisher. But the rioters had lost four people, including Ashli Babbitt, the 35-year-old Air Force veteran who was shot by an officer as she tried to storm the building.

In a series of posts, the Last Sons said her death should be “avenged” and appeared to call for the murder of three more cops.

The group is part of the Boogaloo movement — a decentralized, very online successor to the ­­militia movement of the ’80s and ’90s —­ whose adherents are fixated on attacking law enforcement and violently toppling the U.S. government. Researchers say the movement began coalescing online in 2019 as people — mostly young men — angry with what they perceived to be increasing government repression, found each other on Facebook groups and in private chats. In movement vernacular, Boogaloo refers to an inevitable and imminent armed revolt, and members often call themselves Boogaloo Bois, boogs or goons.

In the weeks since Jan. 6, an array of extremist groups have been named as participants in the Capitol invasion. The Proud Boys. QAnon believers. White nationalists. The Oath Keepers. But the Boogaloo Bois are notable for the depth of their commitment to the overthrow of the U.S. government and the jaw-dropping criminal histories of many members.

Mike Dunn, a 20-year-old from a small town on Virginia’s rural southern edge, is the commander of the Last Sons. “I really feel we’re looking at the possibility — stronger than any time since, say, the 1860s — of armed insurrection,” Dunn said in an interview with ProPublica and FRONTLINE a few days after the assault on the Capitol. Although Dunn didn’t directly participate, he said members of his Boogaloo faction helped fire up the crowd and “may” have penetrated the building.