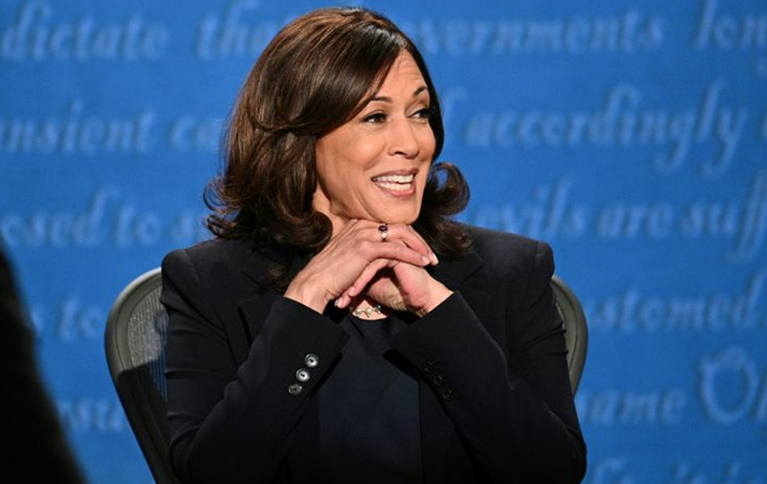 “If she was trying to, she failed at it,” Rove said.

Similarly, Fox News host Geraldo Rivera took issue with her “over-smirking, over-smiling.” Overall though, he said, he felt she did well in showing debate viewers she was “not a scary lady.”

In a tweet, Sen. Chuck Grassley (R-Iowa) wrote that he would prefer to have dinner with Vice President Mike Pence, the “MOST LIKEABLE” of the two.

President Donald Trump, who has used no shortage of racist and sexist attacks against Harris, weighed in too.

In what amounted to a call-in therapy session on Fox Business on Thursday morning, the president called Harris “totally unlikeable.” Later, Trump referred to the senator as “this monster that was on stage with Mike Pence.”

All of it is exhausting — and exhaustingly predictable.

Throughout the debate, Pence repeatedly interrupted and talked over both Harris and moderator Susan Page. As Pence told a series of lies and tried to deflect from the Trump administration’s failed response to the COVID-19 pandemic, Harris’ facial expressions summed it all up, as if to say: “Can you believe this guy?”

Sen. Kamala Harris (Calif.), the Democratic vice presidential nominee, debated Vice President Mike Pence at the University of Utah on Wednesday night. Throughout the debate, Pence talked for longer than his allotted time and talked over Harris.

For many women and women of color, it was all too eerily familiar. Harris endured Pence’s gaslighting, interrupting and mansplaining, all while being hyperaware that her every move was being scrutinized. She had to perform the impossible gymnastics of being assertive and direct — without seeming too “aggressive” or “bitchy” or “unlikeable” — and showing emotion — without seeming too “hysterical” or “weak” or “shrill.”

At times, Harris looked like she was trying to show restraint and not display her emotions, and to figure out the most diplomatic way to call out Pence. It was yet another manifestation of that vicious cycle: be firm, but not angry; advocate for yourself, but do it respectfully.

If you’re a woman and especially a woman of color in politics, it seems like you can never win.

(Marina Fang writes for HuffPost.com … where this perspective first appeared.)