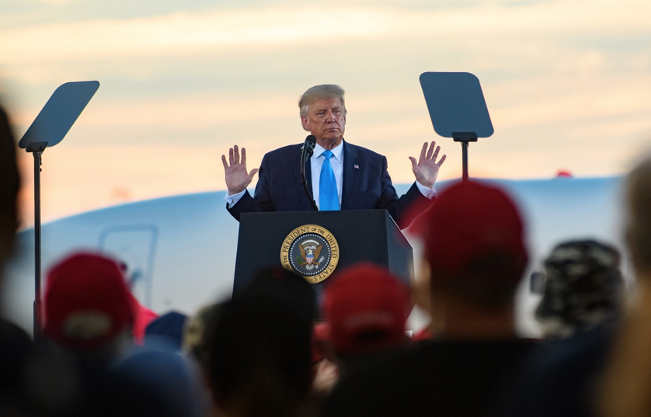 CORONA WATCH--Donald Trump loves parades. In 2018, for no particular reason other than to gratify himself, he organized a military parade in his honor. But as plans for the parade developed, Trump insisted on excluding wounded veterans because “nobody wants to see” amputees, according to an explosive new piece in The Atlantic. In general, Jeffrey Goldberg writes, “Several observers told me that Trump is deeply anxious about dying or being disfigured, and this worry manifests itself as disgust for those who have suffered.” (Photo above: President Donald Trump at a campaign rally in Latrobe, Pennsylvania. Photo: Jeff Swensen/Getty Images).

Although Trump’s willingness to denigrate wounded and fallen soldiers flies in the face of American norms, he’s done it before. In 2015, he called Sen. John McCain a “loser” for getting captured during the Vietnam War, and one year later, he mocked Ghazala Khan, the mother of a fallen U.S. soldier. What’s different about the latest reporting on Trump’s comments is that it comes as we’re mired in a terrible medical crisis, when his terror of sickness is shaping his bungled response and endangering all of us.

I think we’ve generally underestimated the policy implications of Trump’s disgust toward sickness, though the evidence of his sentiments has been present from the start of his political career. He infamously mimed fake spasmodic gestures to mock New York Times reporter Serge Kovaleski just months into his campaign in 2015. (Less infamous was right-wing pundits’ defense of Trump then: Ann Coulter said Trump was just “doing a standard retard, waving his arms and sounding stupid,” as if somehow that made it better.) He described the Paralympics as “tough to watch.” He constantly mocked Hillary Clinton for alleged signs of age and illness in 2016, pretending to wobble and faint at one campaign event, questioning her “stamina,” and promoting conspiracy theories that Clinton has conditions including strokes, Parkinson’s disease, and epilepsy; now he and his campaign are doing the same to Joe Biden. Perhaps most ominously, he has repeatedly endorsed policies that would cut health care for disabled Americans. (Read the rest)