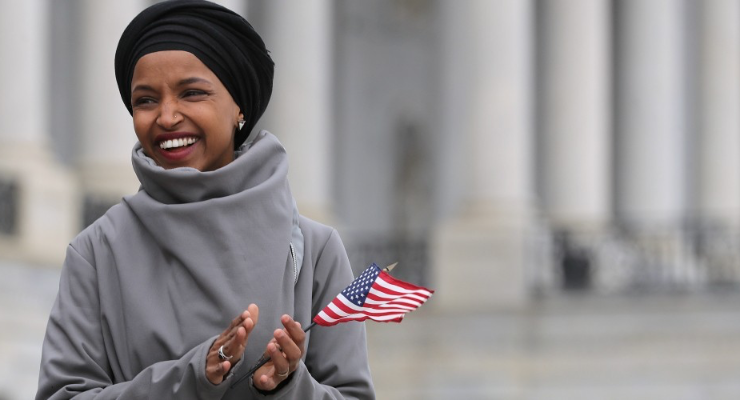 INTEL REPORT--lhan Omar has spent most of her adult life making trouble—good trouble, as her colleague John Lewis, with whom she’s just introduced a resolution supporting Americans’ right to participate in boycott movements, likes to say. So it’s perhaps understandable that she maintains an impressive cool under the repeated onslaught of criticism, threats, and rage thrown her way, from the right as well as well as from the Democratic leadership.

It’s not, of course, an accident that the rightwing imagination obsesses over the woman who, as I’ve written elsewhere, embodies much of what Barack Obama was accused of being by the “birthers”—including Donald Trump, now Birther-In-Chief. She’s Muslim. She was born in Somalia and spent years in a refugee camp before coming to Minnesota. She has strong left politics and is unequivocal about her desire to make America’s sclerotic political system more equitable.

It’s that last bit that is getting lost, however, in the fuss. The Congresswoman’s roots in Minneapolis’s strong, diverse progressive organizing community have received far less attention than her ethnicity, or her membership in  “The Squad” of young, leftist, female legislators. Omar’s past work organizing in her hometown, from supporting Black Lives Matter to pushing for a ban on “conversion therapy” for LGBT youth, as well as her current policy initiatives, have received far less  attention than a few obsessed-over tweets.

Omar was the lead on the recently introduced bill to abolish all student debt. Yet, even as the organizers from that movement credit her for making the issue a priority, most headlines cited Bernie Sanders (indeed a cosponsor), rather than her.

Flanked by the mother of former school cafeteria worker Philando Castile, who was killed by a Minnesota police officer, Omar introduced a bill to ensure all students got school lunch. Her faceoff  with Elliott Abrams, Trump’s special envoy to Venezuela during what appeared to be the lead-up to a U.S. invasion, was the bluntest confrontation I’ve seen of American imperial power—and she did it with a tiny, confident smile on her face, shutting down Abrams’s bluster with a simple “That was not a question.”

Abrams was pardoned for his involvement in the Iran-Contra affair after pleading guilty; he also, as Omar noted, testified that American policy in El Salvador, which included massacres of civilians, children, and other atrocities, was “a fabulous achievement.” Given all that, she asked, “Would you support an armed faction within Venezuela that engages in war crimes, crimes against humanity or genocide, if you believe they were serving U.S. interest, as you did in Guatemala, El Salvador, and Nicaragua?”

While Alexandria Ocasio-Cortez and Bernie Sanders, stalwart on economic issues, have sometimes waffled on questions of imperial power and foreign relations, Omar has remained stalwart as she faces the (predictable) consequences of touching American politics’ long-standing third rails. Accused of anti-Semitism over her tweets criticizing the American Israel Public Affairs Committee by not only Trumpists but by Chelsea Clinton—whose pious “as an American” pearl-clutching handed ammunition to the right—Omar has not backed down.

Omar’s introduction of a resolution, alongside Lewis and Squad member Rashida Tlaib, supporting the right to boycott comes in the face of a bipartisan push to ban the Boycott, Divestment, and Sanctions movement targeting Israel over its occupation of Palestinian lands.

Trump wields accusations of anti-Semitism against Omar, as Talia Lavin wrote, “like a shield with a Star of David daubed on it in thin, flaking paint to defend him.” Yet the administration’s pious concern for the Jews rang hollow when Trump’s advisor Kellyanne Conway, responding to questions about the president’s telling Omar and her U.S.-born colleagues to “go back” to where they came from, asked a Jewish reporter his ethnicity.

The racism of “go back to where you came from” is intertwined with the attacks on Omar’s political positions. From Clinton to Conway, her critics insinuate that her purportedly radical positions cannot be properly American, that she is an outside threat. And the U.S. has a long tradition of “sending home”—deporting—people it deems radical.

Trump targets Omar because she is black and an immigrant and Muslim, of course. But he also targets her because she has been one of the loudest voices challenging U.S. hegemony.

One hundred years before Trump announced a new round of ICE raids, the Palmer Raids rounded up suspected troublemakers, anarchists, and others, and deported around 800 people. One of those “sent back” in the first Red Scare was Jewish anarchist agitator Emma Goldman. In 1955, the U.S. used the McCarran Walter Immigration and Nationality Act of 1952 to deport Claudia Jones, a black Communist organizer, writer, and editor born in Trinidad. (The act was used to revoke passports of U.S. citizens as well, including the leftist entertainer Paul Robeson.) Neither Jones nor Goldman, of course, held elected office, but the shouts of “send her home” directed at Omar will undoubtedly fall on others with less power, as those ICE raids come.

Trump targets Omar because she is black and an immigrant and Muslim, of course. But he also targets her because she has been one of the loudest voices challenging the hegemony of U.S. power, which has always relied on brute force to say who’s in and who’s out, both inside and outside of its borders. She is unwilling to accept the bipartisan consensus that has ruled in Washington for too long, that says some people count and the lives—and deaths—of others do not. And that makes her dangerous.