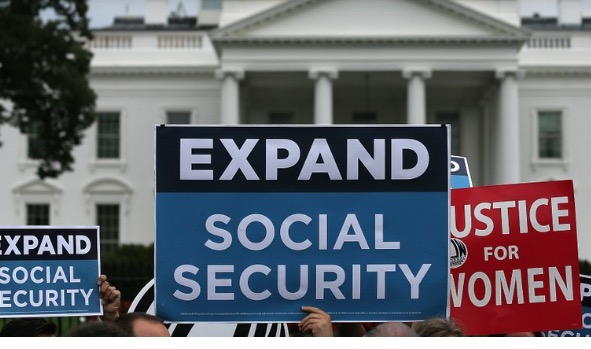 EARNED BENEFITS - Over its more than 87 years, Social Security has given Americans a lot to be thankful for.

Together, through our Social Security system, we protect ourselves, our families, and our communities against the devastating loss of wages in the event of retirement, disability, or death.

Over 65 million Americans receive Social Security benefits, which lift 22.5 million people—including more than a million children—out of poverty every year and lessen the depth of poverty of millions more. In addition to Social Security's retirement benefits, the program benefits over nine million people with disabilities and four million children directly, with their own benefits that have been earned by themselves or working parents. Moreover, these benefits, paid like clockwork every month, are overwhelmingly spent in the local community, creating economic activity and, along with it, jobs and prosperity.

Social Security represents the best of American values, including reward for hard work, sturdy self-reliance, and shared risks. It is efficient, universal, fair, portable, and secure. Nearly every American is either a current Social Security beneficiary, or is likely to benefit in the future.

This Thanksgiving, families across the country appreciate our Social Security system. If they don't give express thanks, it is because it may not come to mind, for good reason. Social Security is always there, quietly in the background, doing what it was created to do: Protecting us if the unfortunate strikes us in the form of disability or death leaving dependents or if the fortunate occurs, in the form of long life.

In addition, those of us working to protect and expand Social Security have another reason to feel thankful and breathe a sigh of relief: Republicans did far worse than expected in the midterm elections, which decreases the threat that they pose to our Social Security system. .

In the months leading up to the election, Republican politicians barely bothered to hide their deep desire to cut, or even dismantle, Social Security's earned benefits. They mouthed their usual platitudes about "saving" Social Security, but released plans to do exactly the opposite.

The Republican Study Committee, a group that counts about 75 percent of House Republicans as members, was even more explicit about the party's intentions. Instead of hiding behind process and complicated concepts like discretionary spending and sunsetting of programs, as Scott and Johnson did, the RSC released a detailed plan to cut Social Security in multiple ways: Raising the retirement age to 70 (a 21 percent benefit cut), slashing middle class benefits, and handing billions of dollars of Social Security's revenue over to Wall Street and private insurance corporations.

Thankfully, Democrats fought back. Social Security was a major focus in the weeks leading up to the midterms.  Joe Biden slammed the Scott and Johnson plans at every possible opportunity. Democratic candidates in competitive races, including Pennsylvania Senator-elect John Fetterman, promised to protect and expand Social Security's earned benefits.

Thankfully, voters listened, and delivered a resounding rebuke to the Republicans on election day. The "red wave" anticipated by political pundits turned into a trickle, with Democrats keeping control of the Senate and Republicans getting a far narrower majority than expected in the House.

Senator Johnson won re-election by only a single percentage point, by far his most competitive race. Fetterman won his race, while enemies of Social Security like Arizona's Blake Masters and New Hampshire's Don Bolduc lost.

Data shows that Americans voted with Social Security in mind. Navigator Research found that Social Security was one of the top three issues for swing voters, behind only inflation and abortion. (Both of these issues received far more media attention in the months leading up to the election. In fact, most media outlets failed to even report clearly about the threat to our earned benefits.) Data for Progress found that voters were "incredibly averse to Republican efforts to cut or slash programs like Social Security and Medicare."

But there's still more to do to protect our earned benefits.

Republicans have repeatedly threatened to take the must-pass debt limit hostage, refusing to raise it unless Democrats agree to cut Social Security and Medicare. In other words, presumptive Republican Leader Kevin McCarthy and his band of budgetary arsonists want to cut earned benefits so badly they're willing to risk an economic catastrophe to make it happen.

Democrats can stop this crisis before it happens by removing the hostage from danger now—raising the debt ceiling in the final session of this year's Congress, before Republicans take control of the House. Every political leader who cares about Social Security's future must make this their top priority.

That includes President Joe Biden. At a press conference the day after the election, Biden stated: "Under no circumstances will I…cut or make fundamental changes in Social Security and Medicare. That's not on the table. I will not do that."

The President's firm promise to protect Social Security and Medicare is something we can all be thankful for—particularly if he keeps that promise by making sure Congressional Democrats raise the debt limit before the end of the year.

That will clear the way for Democrats to continue to push to expand Social Security and Medicare, while requiring the wealthiest to begin to pay their fair share. If Democrats hold firm and continue to fight for protecting and expanding our earned benefits, we will have even more to be thankful for next Thanksgiving.

(Nancy J. Altman is president of Social Security Works and chair of the Strengthen Social Security coalition. She has a 40-year background in the areas of Social Security and private pensions. Her latest book is "The Truth About Social Security: The Founders' Words Refute Revisionist History, Zombie Lies, and Common Misunderstandings" (2018). She is also the author of "The Battle for Social Security" (2005). This article was featured in CommonDreams.org.)