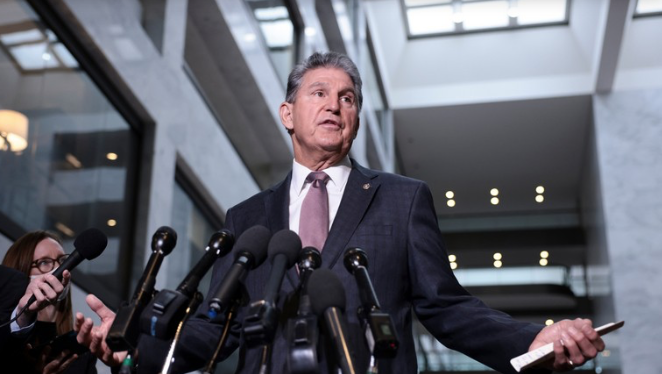 DC POLITICS - In the last week, Senator Manchin (D-WV) has become increasingly public with his opposition to the Clean Electricity Performance Program (CEPP), a policy designed to drive down power sector carbon emissions which is part of the reconciliation bill under consideration in Congress.

With the vote margins so slim in Congress, his stance significantly jeopardizes the chances that this vital policy will survive the legislative process. At a time when the devastating, costly, and inequitable impacts of climate change around the nation—including worsening flooding in West Virginia—could not be clearer, it is deeply disturbing to see the Senator actively undermining policies that would help drive down heat-trapping emissions and protect people.

They are squandering the precious little time we have, the narrow window we have left to avert a climate catastrophe, on business-as-usual politics.

The budget reconciliation package for the Build Back Better Act, which was approved by House committees in September, marked a massive turning point in how the United States aims to address climate change, prioritize environmental justice, and create good paying jobs for working people. The package also addresses long-standing social and economic needs—including healthcare, education, elder care, and childcare. And if the climate and clean energy provisions in the package stay robust and fully funded, they would also put the nation firmly on the path to cutting emissions in half by 2030, a goal the Biden administration has committed to as part of the U.S. contribution to global efforts to limit climate change.

Simply put, the reconciliation bill is a much needed and long overdue investment in the well-being of our people and the future of our country.

But now, thanks to the intransigence of Senator Manchin, a key provision to help reduce emissions—the Clean Electricity Performance Program—is at risk of being removed from the package, and no clear alternative to cut power sector emissions has been put forth in its place. Given that the Senator does acknowledge climate change is real, this is hard to understand.

Even more egregiously, the Senator is now claiming that the nation’s clean energy transformation has already been achieved! That is simply untrue. Our nation still gets about 60 percent of its power from fossil fuels and the EIA forecasts that after declining by 19 percent in 2020 due to the pandemic-related economic crisis, coal-related carbon dioxide emissions will rise by 20 percent in 2021. Meanwhile, we need to sharply bend that emissions curve, cutting U.S. heat-trapping emissions at least in half and getting to an 80 percent clean power sector by 2030. Analysis by UCS and others shows that this goal is within reach—but we need to implement strong policies to get going right away.

Further, the overall scale of the reconciliation bill is also under attack, meaning that all of its valuable provisions—including climate and environmental justice priorities—are under threat of being cut out or severely down-scaled. Given the magnitude and severity of the crises of climate change, economic inequality, and environmental injustice our nation faces, all colliding with the ongoing COVID-19 pandemic, this is no time for Congress to shortchange the legitimate and pressing needs of people while indulging in corporate welfare to benefit the rich and powerful.

What’s all too clear from the latest developments is that the power of the fossil fuel lobby to block progress on climate action still reigns strong in Congress. Senator Manchin’s financial stake in the coal industry is well documented. His seeking to cut the CEPP calls into question whether he is prioritizing and protecting fossil fuel industry interests–which include his own–over his constituents’.

He is not alone. Senator Sinema (D-AZ) is also seeking to sharply reduce the investments in the reconciliation bill, and she has very recently held fundraisers with major industry groups opposed to provisions in the Build Back Better agenda.

And let’s not forget that every single Republican in Congress has failed to support the reconciliation bill (or any other serious policy to address climate change for that matter). What a shameful situation for these policymakers to abdicate their responsibilities as elected officials even as climate change, economic inequity, and environmental injustices strike at the hearts of communities all over the country in both red and blue states!

At this pivotal moment, when our ambitions to protect future generations from the ravages of climate change hang in the balance, let us speak plainly about what these members of Congress are doing: they are putting their narrow self-interests and the interests of the fossil fuel industry above that of their constituents. They are squandering the precious little time we have, the narrow window we have left to avert a climate catastrophe, on business-as-usual politics.

Knowing full well the devastating wildfires, heatwaves, drought, intensifying storms and flooding that the country has experienced this year–the 18 billion dollar-plus extreme weather and climate-related disasters so far this year that took 538 lives–these members of Congress choose to protect the fossil fuel industry.

Knowing full well the extreme rainfall and devastating floods that are becoming increasingly commonplace in West Virginia, and the extreme heat, drought and wildfires affecting the people of Arizona, Senators Manchin and Sinema aren’t willing to invest what’s necessary to secure a clean energy future and are thus enabling the status quo.

Knowing full well that hard-working coal miners and their communities—who have helped keep the lights on for generations—deserve investments that can help them create a prosperous and healthy future in West Virginia, Senator Manchin is seeking sharp cuts in the bill that would affect investments vital to West Virginians, including investments in social safety net programs, infrastructure, and clean energy, while protecting his financial stake in coal.

Knowing full well that fossil fuels are dirty and polluting and impose an outsize health burden on Black, Brown, Indigenous and low-income communities, these members of Congress choose to prolong that burden to prolong fossil fuel profits.

Knowing full well that in this consequential decade we must make a sharp turn away from fossil fuels to have a fighting chance of leaving our children and grandchildren a livable planet, these members of Congress choose to rely on funding from the fossil fuel industry to secure their next term in office.

Knowing full well that the U.S. stands to lose coastal properties by the millions; be exposed to dangerous summer heat unsafe for outdoor work and play; that our cities, vital infrastructure, and lives will be upended by worsening storms, floods, and fires; and that we will lose invaluable species and ecosystems, they choose to let emissions from the fossil fuel industry continue to rise.

Knowing full well that a just and equitable transition to clean energy would also be a boon for public health, job creation, and the economy, they choose to let the fossil fuel industry dictate our future.

That choice they are making is unconscionable. That choice is gravely consequential for young people around the world, today and in the future. We can have a thriving, equitable, clean, and climate-resilient economy if we are courageous enough to seize this momentous opportunity today.

Senators Manchin and Sinema, Republican members of Congress, what do you want your legacy to be? Will you be among those willing to stand up for a bold vision of a future that is clean and just, with benefits for all communities? Will you stand behind the scale of investments necessary to secure that future?

We will continue to fight alongside a diverse and powerful movement for all the incredibly important components of the reconciliation bill that are vital for our nation’s prosperity, especially those that ensure just and equitable climate action. And we urge members of Congress and the Biden administration to stop allowing fossil fuel politics to win the day when so much is at stake for our children and grandchildren.

(Rachel Cleetus is the lead economist and climate policy manager for the Union of Concerned Scientists and a contributor to CommonDreams where this article was published.)