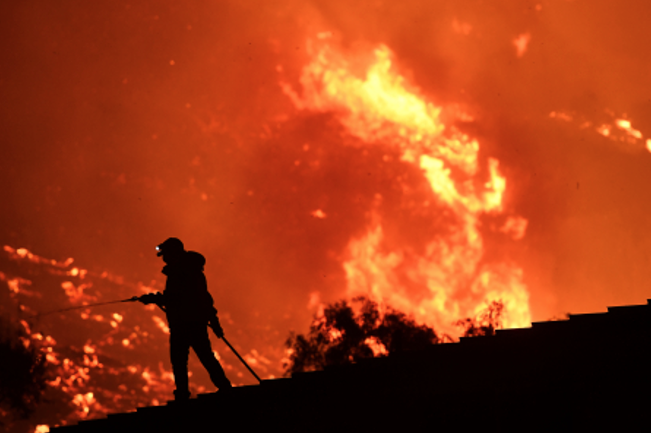 PLANNING WATCH-CityWatch contributor Robert Hunziker has written frightening columns alerting readers that the climate crisis has arrived, and the worst case climate predictions are the most accurate.

Most recently he explained the origins of the climate apocalypse we are in the midst of – many years ahead of schedule.

Unless you have been completely isolated by sheltering-in-place, you should know that:

Poor coverage in mainstream media of climate emergence. If you rely on mainstream news for analyses of the climate crisis, you probably don’t yet know the following:

First, the latest UN report on climate change, not yet publicly released, indicates that many climate change tipping points have been breached. According to The Guardian,

“Tipping points are triggered when temperatures reach a certain level, whereby one impact rapidly leads to a series of cascading events with vast repercussions. For instance, as rising temperatures lead to the melting of Arctic permafrost, the unfreezing soil releases methane, a powerful greenhouse gas that in turn causes more heating.”

Second, the worst-case climate scenarios have been the most accurate. According to University of Oregon sociologist, John Bellamy Foster, an expert on the social science of climate change, increases in economic production are the best predictors of the Green House Gas emissions responsible for the climate crisis. In his view, the capital accumulation process, the perpetual reinvestment of profits, accounts for the relationship, as demonstrated by this chart.

Third, six years ago UCLA’s Regional Collaborative for Climate Action and Sustainability published an article that forecast the climate crisis would overwhelm the Los Angeles metropolitan area by mid-century. Decades earlier than expected, these long-term predictions have already appeared.

Fourth, LA’s Department of City Planning is updating LA’s General Plan’s Housing Element and 17 of its 35 Community Plans. These updates could include policies and programs that reduce the Green House Gas emissions responsible for rapidly accelerating climate change, but they don’t. Instead, the updates are guided by an alternative goal: reducing barriers faced by private investors intent on building highly profitable market-rate housing in Los Angeles. The climate consequences of these changes, mostly up-zoning and permit streamlining, have not been considered, even though the tenants who can afford these energy-intensive up-scale apartments rely on cars – not mass transit – for transportation.

This is a partial list of what could be done through LA’s General Plan elements to reduce and adapt to climate change. In fact, the State of California has already provided templates on how to proceed, all of which City Hall has ignored.

Preserve existing buildings because they have embedded carbon. Each demolition sends the embedded carbon in older buildings to landfills or into the air, often as highly toxic lead paint and asbestos dust. Then, replacement structures must be constructed at these leveled in-fill sites. This requires the fabrication of new building materials, their shipment to building sites, the construction of new structures, following by their operation, including continuous heating, ventilation, and air conditioning (HVAC), as well as additional cars, ubers, and deliveries, all of which consume more energy than the previous structure.

Prevent mansionization. Mansionization not only requires the demolition of existing, low-priced, less carbon-intensive houses, but the new McMansions also consume far more energy. They feature 24/7 heating and air conditioning, as well as large double driveway and garages, usually for low-mileage luxury cars. In addition, McMansions increase the building footprint, which reduces the percolation of rainwater into underground aquifers. While Los Angeles has adopted several ordinances to restrict McMansions, only one works, Historical Preservation Overlay Zones (HPOZ), and they are threatened by the State legislature.

Mandatory planting and long-term care of trees for shade, efficient heating and cooling, and sequestering atmospheric carbon.  Despite the arrival of a hotter and drier climate in Los Angeles, there are still many drought and heat tolerant tree species suitable for Southern California’s yards and parkways.  Few developers spend the time and money for this type of climate change mitigation and adaptation, and LA’s Department of Building and Safety has little expertise and interest in tree planting and long-term care.

Grasscrete instead of concrete. New residential construction has a considerable portion of its site devoted to sidewalks, driveways, and hardscape. These paved sites could be covered by grasscrete, a permeable alternative to the solid concrete that directs runoff to storm drains.

Mandatory rooftop solar for electrical generation, heating, and cooling. Existing technology is already available and continues to steadily improve. It can facilitate the expansion of distributed power generation and local grids that reduce the need for fossil fuels, accommodate alternatives to internal combustion engines, and accelerate the transition to renewable energy.

To be clear, City Hall’s choice to use the updated Housing Element and Community Plans to promote real estate speculation instead of mitigating climate change is not an outlier. It is consistent with other glaring omissions in the preparation of these General Plan elements.

1) Institutional Residential Investors: Los Angeles has enormous amounts of institutional funds flowing into the city for cash purchases of houses and the construction of new luxury housing and McMansions. These investments are guided by short-term profits, not long-term concern over climate tipping points.

2) Population Decline: LA’s population has consistently declined over the past four years. The city now has 3.9 million people, nearly 100,000 people below its peak. This demographic drop has not impacted speculative real estate investment and plan updates because most of those leaving LA are low-income residents priced out of the housing market. This explains why Los Angeles has high apartment vacancy rates, despite its housing bubble.

3) Up-zoning is counter-productive: Up-zoning cannot compel real estate investors to part with their money. This is why LA’s enormous zoning capacity remains mostly unused despite major bump-ups through LA’s Accessory Dwelling Unit (ADU) and Density Bonus programs. These two forms of up-zoning have increased property values, but rarely led to the completion of low-priced residential units reserved for low-income tenants.

Considering that the climate crisis has arrived decades ahead of schedule, there is no excuse for City Hall to misuse its infrequent General Plan updates to grease the wheels of real estate speculation – instead of reducing Green House Gas emissions.

(Dick Platkin is a former Los Angeles city planner who reports on local planning issues for CityWatch. He is a board member of United Neighborhoods for Los Angeles (UN4LA) and co-chairs the Greater Fairfax Residents Association. Previous Planning Watch columns are available at the CityWatchLA archives. Please send questions and corrections to [email protected])  Prepped for CityWatch by Linda Abrams.