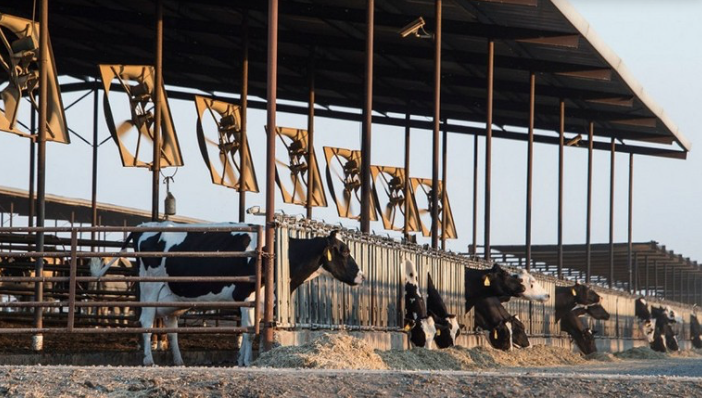 While the transition to a real, renewable energy system is imperative to a livable climate future, it's just as urgent to address the destructive impacts of our industrial food system. The current system is highly concentrated and exploitative, and it's driving climate change and water shortages.

The first step is passing the Farm System Reform Act.

To address the climate crisis, we must break up the big food monopolies and stop the practice of concentrating large numbers of animals on factory farms. The first step is passing the Farm System Reform Act.

The Relationship Between Factory Farms and Climate Change

Factory farms drive climate change. Raising cows and pigs on factory farms accounts for 14.5% of all human-induced greenhouse gas emissions, the vast majority coming from producing corn and soy to feed factory-farmed animals. In fact, the top 20 meat and dairy corporations together contribute more greenhouse gases than the entire country of Germany, and together the top five contribute more than fossil fuel giants Exxon, Shell, or BP. These meat and dairy corporations are pushing factory farm expansion, further driving up greenhouse gas emissions, while family-scale livestock farms struggle to survive.

Further, while factory farms drive water shortages through climate-induced droughts, they also directly poison vast quantities of freshwater across the country through the waste they produce.

Agriculture is the leading known cause of pollution in U.S. rivers and streams and is the second-largest known contributor to the contamination of wetlands. Pollution from animal feeding operations threatens or impairs over 13,000 miles of U.S. rivers and streams and 60,000 acres of lakes and ponds. In one stark example, nearly 500,000 dairy cows on factory farms in Tulare County, California produces more manure waste than the human residents of the Los Angeles metropolitan area.

We need to break this vicious cycle of factory farms polluting water and driving climate change, which causes water crises for people and the environment.

An Even More Urgent Case For a Ban on Factory Farms

Food & Water Watch called for a ban on factory farms in early 2018 because we knew the fragility of our food system. For years, our team has been educating and organizing against extensive corporate control and how it harms family farmers, rural communities, food chain workers and consumers. We knew that in order to avoid the worst impacts of climate change we must address industrial agriculture.

Less than two years later we were proud to work with lead sponsors Senator Cory Booker and Representative Ro Khanna to introduce the Farm System Reform Act in U.S. Congress, a visionary bill that includes a ban on new and expanding factory farms and a phaseout of existing facilities by 2040. Originally introduced in the Senate in December of 2019 and in the House in March of 2020, the Farm System Reform Act helped people to see that a better way is possible—and in fact critical—if we are to protect our water and climate as well as protect food chain workers and ensure a safe and plentiful food supply.

And now we're doing it again—even bigger and bolder than last time.

In July 2021, Senator Cory Booker and Representative Ro Khanna reintroduced the Farm System Reform Act in the new Congress with three original Senate co-sponsors and a number of new House co-sponsors. The bill is endorsed by a broad coalition of organizations including Food & Water Watch and Food & Water Action, the American Society of Prevention of Cruelty to Animals, Family Farm Action, the United Food and Commercial Workers Union, and Johns Hopkins Center for a Livable Future. Over 100 individual farmers have also already signed a letter in support of the bill, with more joining every day.

This groundbreaking bill has quickly become the north star of the movement to ban factory farms and end corporate control of our food system and should be a key pillar of national efforts to address climate change. In addition to an immediate ban on new and expanding large factory farms and a phase-out of existing facilities by 2040, the Farm System Reform Act would also:

The Farm System Reform Act is a bold and yet commonsense approach that would move us toward a food and farm system that works for us—instead of wealthy corporations only concerned with their own bottom lines. It would help to build the kind of resilient, regionally-based food system that we advocate for in our new report, Well-Fed. It would level the playing field for family-scale farms and help rebuild rural America. And it would provide a real solution to addressing the climate impacts of industrial agriculture—instead of more false solutions like factory farm gas (biogas) or carbon markets.