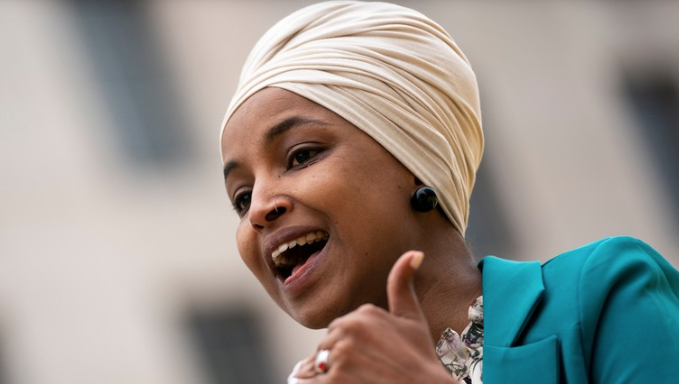 Rep. Ilhan Omar—the first Somali-American elected to Congress and an outspoken critic of U.S. militarism—on Friday sent a letter to President Joe Biden questioning his rationale behind its first drone strike in Somalia earlier this week,

and seeking to hold his administration accountable for a promise it made to compensate families of civilians killed by American airstrikes.

"How does your administration plan to better balance our diplomatic and development goals in Somalia with the militarized counter-terrorism approach that was so overemphasized by the previous administration?"
—Rep. Ilhan Omar

United States Africa Command (AFRICOM) said Friday that the July 20 strike targeted al-Shabaab militants "in the vicinity of Galkayo," and that "the command’s initial assessment is that no civilians were injured or killed" in the bombing.

U.S. Marine Corps Brig. Gen. Thomas Savage, AFRICOM's deputy director of operations, said the "strike was conducted under collective self-defense authority," which according to the Pentagon means the military did not need White House approval for the action.

In her letter (pdf), the Minnesota Democrat wrote that "'collective self-defense' is a term with variable meanings in national and international law, and especially in the context of your ongoing review of airstrike authorities, its use merits further explanation in this case."

"I have been deeply engaged on this question throughout my time in Congress, not only focused on the legal merits of individual strikes, but on how our militarized counter-terrorism approach to al-Shabaab fits into our overall strategy and policy towards Somalia," wrote Omar.

"In that respect, it is noteworthy that this week also saw reporting on the family members of Somali civilians killed by airstrikes conducted under the Trump administration being unable to contact U.S. authorities or receive the condolence payments for which Congress has repeatedly appropriated funds."

To that end, Omar asked the following questions:

Omar has repeatedly criticized successive administrations for not providing monetary reparations for civilian victims of U.S. drone attacks in Somalia, and for the Pentagon's continued failure to acknowledge the atrocities.

While AFRICOM last year acknowledged carrying out 46 "precision airstrikes" targeting al-Shabaab fighters, it did not mention any civilian casualties resulting from the attacks. However, last July, Amnesty International said the U.S. had "carried out at least 189 airstrikes in Somalia since 2017," and that in just nine of these attacks, "21 civilians were killed and 11 others were injured."

A March 2019 report by Amnesty accused the U.S. of launching airstrikes in Somalia under "a shroud of secrecy" and killing civilians "with impunity."

Last month, the Pentagon claimed (pdf) U.S. forces had killed a total of 23 civilians in 2020 in Afghanistan, Iraq, Somalia, Syria, and Yemen. Human rights defenders responded by accusing the Biden administration of joining its predecessors in undercounting the number of civilians killed during U.S. wars.

The true number of civilians killed by U.S. attacks in 2020 was far higher than 23, according to organizations that monitor such casualties. The U.K.-based journalistic monitoring group Airwars, for example, reported (pdf) between 34 and 36 civilian deaths caused by U.S.-led attacks on Islamic State targets in Iraq and Syria last year. Airwars also reported between seven and 13 civilians killed by U.S. forces in Somalia in 2020.

A December 2020 report by Neta C. Crawford of the Costs of War Project—a team of 50 scholars, legal experts, human rights practitioners, and physicians at Brown University's Watson Institute of International and Public Affairs in Rhode Island—found that at least 83 civilians were killed in 24 separate U.S. attacks in the first nine months of last year.

Over the course of the nearly 20-year so-called War on Terror, estimates of the number of people killed by U.S.-led bombs and bullets range from hundreds of thousands (pdf) to well over one million (pdf).

"We're troubled that no one in the administration sought the required legal authorization from Congress for Tuesday's drone strike in Somalia especially with no American forces at risk—and apparently, did not even check with our commander-in-chief," said the senators, who earlier this week unveiled legislation aimed at reasserting congressional authority over war powers.

"We need to reestablish a system of checks and balances in our national security to make Congress a part of these decisions about war and peace and put the interests of the American people front and center," they added. "It's time to do away with questionable legal justifications claimed by one administration after the next for acts of war like this."

(Brett Wilkins is staff writer for CommonDreams.org where this story was first published).