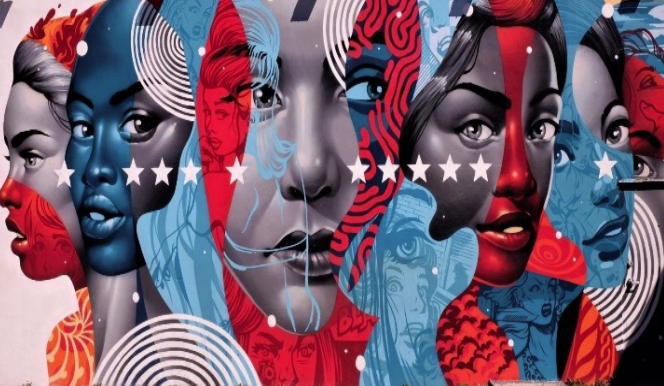 PERSPECTIVE--Imagine a “USA!” that has truly outgrown – transcended – racism. Would it still have a Republican Party?

One recent and shocking – but hardly surprising – piece of news is the huge scramble in legislatures, especially the Republican-controlled ones, all across the country to draft and pass legislation restricting the ability of Americans (some of them, anyway) to vote. It’s as though there’s a national effort going on to repeal the Voting Rights Act of 1965 and return to a happier time: Let’s make America great again!

But all this is only one manifestation of the spew of hate and fear unleashed by the recent ex-president, who claimed control of his party thanks to a stunning willingness to blather unmitigated racism in his public utterances, rather than merely serve it in secrecy. In so doing, he made a place for the Proud Boys and their ilk in the American mainstream and replanted a vision of antebellum greatness in the minds of worried white people.

So, Donald Trump gave America Mexicans and Muslims and, oh yeah, all those folks from shithole countries in Africa. He also gave them Democrats. And Republicans (the weak ones). He gave them Mike Pence.

This was Trump on Jan. 6: “We’re going to try to give the Republicans, the weak ones, because the strong ones don’t need any of our help, we’re going to try and give them the kind of pride and boldness that they need to take back our country.”

Or as Lindsey Graham politely put it to Sean Hannity: “If we don’t do something about voting by mail, we’re going to lose the ability to elect a Republican in this country.’”

And then there was Alice O’Lenick, the GOP chair of the board of elections in Gwinnett County, near Atlanta, who lamented that “they’ve got to change the major parts” of many of the newly blue state of Georgia’s election laws “so that we at least have a shot at winning.”

As Harvey Wasserman writes, putting things a bit more bluntly: “The shock to the Republican Party has been primal. GOP operatives know that without massively restricting the vote and reversing the fair ballot counting that came with digital scanners and paper-based recounts, they are in terminal danger.”

So, they’ve got to do something. And certainly the party would prefer to cater to the principles of democracy (right, guys?) and come up with policies that appeal to a majority of the public. But alas, not even fear and propaganda, two political techniques with long histories of effectiveness, are any longer adequate to that task – not since, you know, the end of the Jim Crow era, the last time America was actually great.

So, what choice does the party have? According to the Brennan Center for Justice, since the November election, 28 states have introduced or carried over no fewer than 106 pieces of legislation that, in various ways, restrict Americans’ ability to vote. And by “Americans,” I mean – wink, wink, nudge, nudge – certain Americans.

These bills, as Wasserman writes, would cast their restrictions in a variety of ways. Here are a few of them: expanding he ability of states to purge voter rolls; requiring photo IDs at polling places (only certain IDs being acceptable: gun licenses yes, student IDs no); slashing the number of precincts in primarily non-white, lower-income areas, and at college campuses (for instance, Arizona’s Maricopa County could go from 100 precincts to 15); enshrining good, old-fashioned gerrymandering.

And speaking of Arizona: “The most extreme bill,” Ari Berman writes, “would allow the GOP-controlled legislature to override the secretary of state’s certification of election results and appoint its own electors to nullify the popular vote choice of the voters—which Trump tried and failed to persuade them to do in 2020.”

Republicans are the party of the so-called Southern Strategy, which Barry Goldwater and Richard Nixon developed in the1960s, claiming the white, Jim Crow South from the Democrats and aligning themselves with the values and paranoias – and mental and psychological limits – of white supremacy. The country is always in the process of being “stolen.”

So again, I challenge us to begin the complex and troubling process of imagining a “USA!” that has transcended racism. How does one depoliticize racism and make it simply, absurdly wrong? I fear this may not be possible until we begin to learn how to transcend nationalism as well, which is based on the assumption that sovereignty is not possible without borders. And as soon as there’s a border, there’s another, who must be feared.

Joe Biden recently announced that he would raise the cap on refugee admissions from the cruelly low number of 15,000, which is where Trump set it, to 125,000. This pushes global consciousness in another direction: valuing, as Bob Goodfellow of Amnesty International put it, “the lives, well-being, and human rights of people around the world and about our shared future together. How quickly and how comprehensively we are able to welcome our new neighbors will decide just how bright our future can be.”

Robert Koehler ([email protected]), is provided CityWatch by PeaceVoice, is a Chicago award-winning journalist and editor. He is the author of Courage Grows Strong at the Wound.)