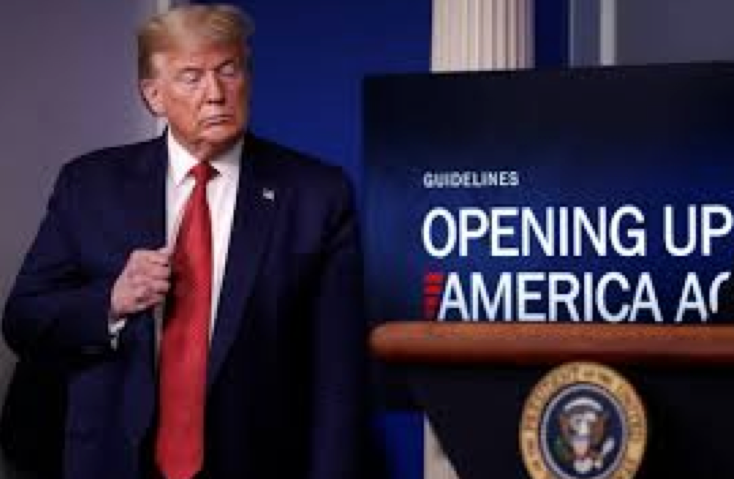 VIEW FROM HERE--The United States is the richest country in the world. It has the best hospitals in the world.

The best doctors and health professionals in the world. The most sophisticated technology in the world. The most civil liberties and a free press. Her citizens are creative, determined, resilient, passionate, and full of expectation for the future. If any nation had the outer and inner resources to manage a pandemic, it should have been us.

Why then has the response of my country been so lackadaisical, incoherent, spiteful, and ultimately wasteful of human lives? In the eyes of so many from here and all over the world, the Trump response to COVID-19 has amounted to an unmitigated embarrassment?

If my assessment is to be doubted, I plead that one looks squarely at the facts. Approaching four months since the Trump administration first grasped the scale of the problem, the United States (as of May 27th), now leads the world in confirmed cases of COVID- 19 (with 1,724,411). Brazil is in second (396,166), and Russia is third (379, 680). The only countries that have more cases per 1 million people are San Marino, Qatar, Andorra, Mayotte, Luxembourg, Bahrain, and Singapore.

My fellow citizens, do not chase red herrings. When the President talks about the number of tests conducted rather than his lack of a national testing plan, he is trying to avoid talking about the unacceptable death toll. When he goes on about the economy reopening and getting schools back in session, he is doing everything in his power to not talk about the number of infected people and the overall lack of healthcare that plagues the lives of so many Americans. And when he shifts the conversation to preposterous conspiracy theories and repugnant insults aimed at political rivals-both concocted and legitimate- he is trying his best to stir up hostility and confusion. It all contributes to the goal of diverting attention away from his administration’s criminal negligence. As long as people are bickering, fed up, anxious, or just flabbergasted by his latest tweet, they are not addressing his incompetence, which is costing lives on a daily basis.

But here's the real problem. Trump’s strategy of diversion is not only a reflection of our President's lack of character in a time of unprecedented national crisis, but it is also a reflection of our nation's priorities under his destructive influence. How easily we have allowed ourselves to be distracted and misled by a man most of us know to be a pathological liar.

How pitifully we have allowed ourselves to accept- even tacitly- a death rate that triples other industrialized nations. And how naively we have deceived ourselves into believing, with Trump stage-managing the charade, that reopening the nation and relaxing social distancing measures will miraculously make the virus disappear. This is Freudian wish-fulfillment on a massive scale. "Illusions commend themselves to us", Freud once wrote "because they save us pain and allow us to enjoy pleasure instead. We must, therefore, accept it without complaint when they sometimes collide with a bit of reality against which they are dashed to pieces."

Is that not what is happening? A president and a nation are so eager to experience pleasure again, that they will do almost anything to evade or ignore the pain of reality. In this case, the collision is far worse than shattered beliefs about the authority of religion or the dependability of our parents. In this case, the illusions peddled by Mr. Trump and others are violently colliding with the reality of human immune system-in fact, with the sacred fragility of life itself. The result has been more deaths than the Korean War and the Vietnam War combined. If that is not a wakeup call than I do not know what one is.

Nevertheless, to be as fair as possible, it is not just about pleasure or even material comfort that drives people back out when the virus is still rapidly spreading. People need to feed their families. At a very basic level, going back to work is not a luxury that they can afford to sit out. If they do not work, their family risks hunger or even starvation. Talk about wish fulfillment on a massive scale. Those who can eat accept the illusion that hunger is not real in America, and that even during the pandemic, every American has access to enough food to live on. That is not the case for millions.

Here again, I find fault with the Trump administration. Stay at home orders were appropriate and should be extended as long as necessary to contain the virus. Spain and Italy and China and the UK and France and Germany, are all going down in the number of cases over the past 60 days.

Brazil, India, Peru, and other countries are spiking. The U.S is barely plateauing. Yet if you order people to stay home because of a national emergency, it is your responsibility to house (e.g., shelter, rent and mortgage assistance) and feed them- whether through guaranteed income or food vouchers. $1,200 will not cover four months of expenses, not in any town or city in America.

That, it turns out, was a colossal mistake by the White House and Congress that will have tremendous repercussions. If people had enough money to live on, they would have stayed home longer and been more selective about going out for anything but essentials. Give people enough to eat and thousands of lives could have been spared in the process. But tell people they must stay home while not providing for their families, ensures that the program will fail. That's where we are now.

(George Cassidy Payne is an adjunct professor of philosophy at SUNY Finger Lakes and a freelance writer. He is a CityWatch contributor and lives in Rochester, NY)