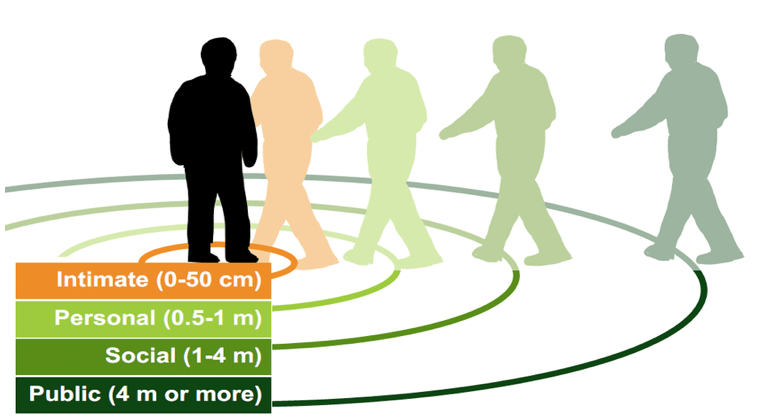 VIEW FROM HERE-Social distancing may feel like a new and abnormal concept for most Americans but not for those familiar with the research and writings of Edward T. Hall (1914 – 2009).

Throughout his professional career as a cultural anthropologist, Hall explored the multifaceted dimensions of cultural and social cohesion and described how people behave and react in different types of culturally defined personal space. He was one of the 20th century’s most thoughtful observers of human behavior and his theories have influenced a wide range of academic fields and corporate industries.

In the field of anthropology, Hall was well known for his system of distinguishing cultures as either "High-context" or "Low-context." The former has many "unwritten rules," with many contextual elements that help people to understand the rules. In a low-context culture, very little can be taken for granted, and misunderstanding and ambiguity are kept to the bare minimum. Whereas high-context cultures often have reserved, inward reactions, a low-context culture such as the American often results in highly visible, external, and outward reactions. (This is one reason why sports are an obsession in the United States.)

A high-context culture views social cohesion in terms of strong family ties, as well as a strong distinction between in-groups and out-groups. Think of Italy, Spain, Russia, China, and Japan. A low-context culture is more flexible and open to group integration and changing patterns in social organization. This has the consequence of producing strong and weak bonds between people. In America, for example, social bonds are in a state of constant flux and uncertainty. Affiliation to family and community is important, but not to the same degree as the Italian or Chinese cultures. Whereas Americans often view people in terms of economic transactions, in China the concept of loyalty and high commitment to long-term relationships are the highest priority. In low-context cultures, the task is almost always more important than the relationship.

Naturally, the concept of social distancing came up in Hall's work. In groundbreaking books such as The Hidden Dimension (1966), he even coined a term for this, calling the exploration Proxemics. In a nutshell, this theory suggests that some cultures require more space than others. From personal body space to space in offices, parking lots, and homes, how we define space and who belongs there is a byproduct of high context or low context worldviews. “In the United States, for instance, people involved in the conversation will assume a social distance of roughly 4–7', but in many parts of Europe, the expected social distance is about half that with the result that Americans traveling overseas often experience the urgent need to back away from a conversation partner who seems to be getting too close.” Everything from furniture, buildings, and cities, can be understood when looking at internalized expectations about how these areas should be spatially organized. United States cities, for instance, are regularly set out along a grid, a preference borrowed from the British.

Hall concluded that the American culture is far more concerned with private property, private spaces, and well-designated boundaries than probably any other in the world. This happens, he pointed out, "right down to the desk-level, where co-workers may do battle over a piece of paper which overlaps from one person's area to another." At a national level, many wars have been fought by American governments to secure and attain more space.

In all actuality, Americans have been practicing various elements of social distancing for centuries. It is deeply ingrained in the national psyche-for better or for worse. I think if Edward Hall was alive today, he would not be surprised to find that a low context, high territorial culture such as the United States could not only accept social distancing guidelines during this pandemic but find ways to embrace and take advantage of them.

(George Payne is a freelance writer, social worker, adjunct philosophy instructor, and father of two. He lives and works in Rochester, NY. Payne has a master's degree in theology and philosophy from Emory University in Atlanta, GA.) Prepped for CityWatch by Linda Abrams.