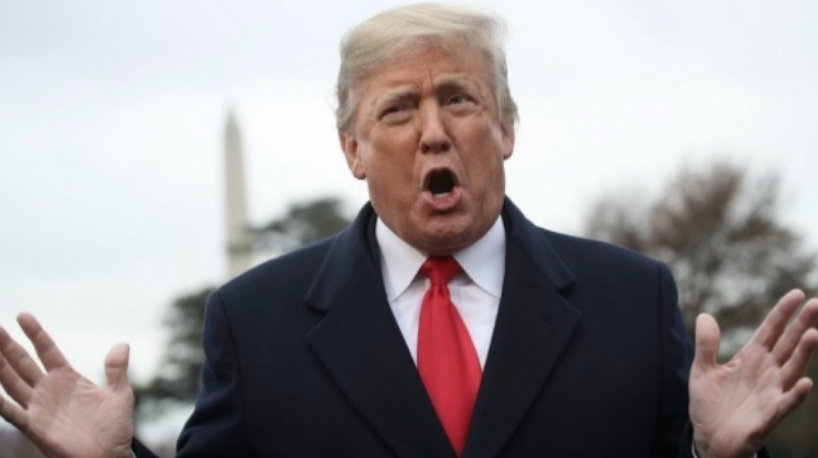 TRUMP’S PATH TO VICTORY?-Trump's racist rant about four freshman congresswomen of color is getting a lot of play in the press and from Democrats.

They're doing everything they can to get the fact that Trump is a racist into the headlines and on the news. But really, didn't we already know this? Trump threw the dog whistle away a long time ago, and he's been making explicit what had been for 40 years the implicit racism of the Republican Party.

And while Trump's racist rants and his willingness to double down on them are truly heinous, the Democrats' eagerness to jump on it now is another example of their misguided notion that if they show how bad this guy is, they'll win in 2020. And they might be right. Trump is sufficiently bad that enough people may turn out to vote him out, allowing a Democrat to win, but the Democrats shouldn't bet the ranch—or democracy's future on that prospect.

The bottom line is that victory in 2020 will be all about turnout, just as 2014, 2016, and 2018 were. And turnout will be determined by whether Democrats address voters' real concerns with a campaign based on values that responds the people's legitimate worries about the economy, income inequality, climate change, and the high cost of education. And what the people want are not half-measures, patchwork fixes, and platitudes, but substantive policies like Medicare for All, the Green New Deal, and taxing the rich and the wealthy.

So, let's unpack the turnouts in those elections and see what they have to teach us.

In 2014, Democrats ran to the right of center, even fleeing from Obamacare, the party's big legislative victory. As a result, voter turnout was the lowest it had been in 72 years (and it was lower in 1942 only because folks were a little busy with a World War), and Republicans won across the board at all levels. But the real story of 2014 were the no-shows, and they signaled the growing awareness on the part of progressives and independents that government is owned by the uber-rich and corporations, and that voting for Democrats doesn't change that much.

In 2016, Democrats doubled down on the center right neoliberal strategy, and the DNC, the media, paid pundits, and the not-for-profit think tanks and foundations that make up the supporting infrastructure of the Democratic Party joined to ward off Sanders' progressive challenge. As a result, Hillary won the nomination and turnout was down from 2012 and 2008. We are now living with the consequence of that.

In 2018, Democrats moved to the left, turnout was the highest it's been for a midterm in over 75 years, and Democrats made gains in the House, and in the states. Some have argued with the notion that moving toward a more progressive position helped Democrats win, but the facts support that the party's move away from centrism to the left is what delivered their victory.

Bottom line: Democrats win when turnout is high; and turnout goes up when they respond to the progressive majority's legitimate concerns. When they don't, they tend to lose.

Here's the deal. Trump has a solid 40 to 45 percent of the voters in his corner, and they're sufficiently angry and alienated that nothing he does will dislodge them. Not tapes of him bragging about grabbing pussy; not multiple accusations of him assaulting women; not giving money to the ultra-rich and corporations; not tanking the farm economy; not separating children from parents and establishing concentration camps; not excusing neo-Nazis and right-wing extremists. He will win or lose based on whether enough Democrats and Independents turn out and vote in the 2020 election to defeat the 45 percent who support him. Period.

So you'd think that a strategy to maximize turnout would be a no-brainer for Democrats. But you'd be wrong.

It should be obvious to even the most die-hard neoliberal that backing the old Clintonian, DLC, Third Way policies that now dominate the party, the mainstream media, and the punditry have depressed turnout. You can trace the party's decline and it goes in lockstep with the embrace of neoliberal policies favoring Wall Street, big banks, corporations, and the uber-rich.

Let's dispense with a few other shibboleths that centrists use to keep progressives at bay.

You'll hear a lot about the loss of the South as a reason for Democrats' tough times. Yes, the embrace of the Civil Rights Act caused Democrats to lose Southern whites, but the decline continued long after that and it was much broader—it happened at both the national and state levels, and it occurred in states where support for civil rights laws was strong if national polling is to be believed.

The obvious implication of these facts is that Democrats have been losing ground for decades, and the reasons go beyond the loss of support from Southern whites.

The other reason many folks give is the Russian hacking of Hillary's emails. But it's important to note that if Ms. Clintons' emails didn't reveal a history of deception about her relationship with Wall Street, they would likely not have influenced the election—assuming they did. In other words, it was the content of those emails that sunk her, not the emails, per se.

At the end of the day, Democrats can't rely on revealing the fact that Trump is a racist, an idiot, and an incompetent to win. His supporters don't care.

Democrats need to appeal to the biggest block of potential voters out there: the no-shows, and most of them are progressive. And to get them to engage, the party has to run candidates that stand for the values people care about—an equitable and just economy; a responsible climate and environmental platform; a fair and affordable healthcare plan the serves the people, not big pharma and the insurance industry; and an immigration policy which is compassionate, rational, and just, not simply an engine of hate and scapegoating.

There are other issues Democrats could mobilize that could help them win—legislation which eliminates the Citizens United decision, which made money the deciding factor in elections. Or an end to the Republicans' systematic sabotage of the elections through voter suppression, gerrymandering, and other anti-democratic practices.

But all of these would demand that they first abandon their marriage to big money, Wall Street, and the inside the Beltway elite. Unfortunately, the neoliberals in charge of the party are loath do that. Instead, they are pinning their hopes on showing everybody how bad Trump is, while rejecting progressivism and pushing identity politics, which ironically plays right into the Republicans' divide-and-conquer strategy.

This gives Trump the only chance he has of winning.

(John Atcheson is author of the novel, A Being Darkly Wise, and he has just completed a book on the 2016 elections titled, WTF, America? How the US Went Off the Rails and How to Get It Back on Track, available from Amazon. This piece appeared on Common Dreams. Follow him on Twitter @john_atcheson  Photo: Win McNamee/Getty Images. Prepped for CityWatch by Linda Abrams.