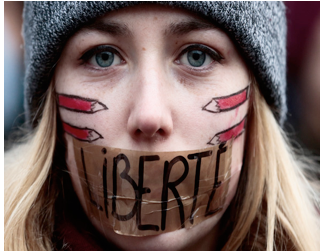 THINK PIECE-If the terror attacks in Paris have a silver lining, it is that they have sparked an outpouring of support for freedom of speech across the globe and across the ideological spectrum. According to The Associated Press, even Sheikh Hassan Nasrallah, the leader of Hezbollah, has weighed in on the side of enlightenment, saying “that radicals have done more to disparage the Muslim prophet than journalists who published satirical cartoons mocking Islam.”

Here in the U.S., the outrage has been virtually nonstop, expressed by media outlets, satirists and comedians, and in a marked display of solidarity, by Republican and Democratic party leaders.

As a nation, we are rallying around the First Amendment. To quote Chicago Tribune columnist Steve Chapman from an Op-Ed published Friday:

“We in Western societies almost always defer to the wisdom of Supreme Court Justice Oliver Wendell Holmes Jr., who said the basis of the First Amendment is ‘not free thought for those who agree with us but freedom for the thought that we hate.’ ”

These are fine and uplifting sentiments, and they clearly distinguish our best political and moral values from the twisted, medieval mindsets of the jihadists who perpetrated the massacres in France. But amid the celebration of our values, a question nags: Just how free is freedom of speech in America?

The uncomfortable truth is that here, as elsewhere around the world, freedom of expression has never come easily and is nearly always threatened in one way or another. From the Salem witch trials of the 1690s to the Red Scares of the mid-20th century and the Pentagon Papers trial of Daniel Ellsberg and Anthony Russo in the early 1970s, we have persecuted and prosecuted those whose ideas we fear. Intolerance and suppression of speech—along with the promotion of views favorable to dominant elites—have been hallmark American traditions.

Today, those traditions continue in at least five critical ways:

1. The Equation of Money and Political Speech: In a series of decisions dating back to the 1976 case of Buckley v. Valeo and continuing through 2010’s ruling in Citizens United and April’s majority opinion in McCutcheon v. FEC, the Supreme Court has held that the expenditure of money on elections is the equivalent of political speech entitled to full First Amendment protections.

The result has been the development of a political system in which candidates from both major parties are increasingly indebted to corporate donors and dare not contest the priorities of their patrons. The messages of third parties are effectively censored.

2. Union Busting: At the same time that the Supreme Court has promoted corporate speech, it has embraced a perverse distortion of the First Amendment when it comes to public employee unions, the last bastion of organized labor in America and a key source of funding for Democratic office seekers.

In two recent cases—Knox v. SEIU and Harris v. Quinn—the court has characterized union dues procedures as coercive, holding that the First Amendment right to freedom of association prohibits the collection of “fair-share” fees from government workers who elect not to join unions that nonetheless negotiate on their behalf. The long-term goal is to neutralize unions as a countervailing political voice.

3. Prosecuting Whistle-Blowers: The prosecution of whistle-blowers did not end with Ellsberg. Indeed, it will continue this month with the trial of former CIA officer Jeffrey Sterling, who is accused under the Espionage Act of leaking information to New York Times reporter James Risen that the CIA provided flawed nuclear weapons data to Iran in 2000. As The Guardian and other publications have noted, “Only ten people in American history have been charged with espionage for leaking classified information, seven of them under Barack Obama.”

Chelsea Manning was convicted under the act in 2013. NSA whistle-blower Edward Snowden awaits a similar fate should he return to the U.S.

4. NSA Spying: The pervasive surveillance apparatus erected by the National Security Agency doesn’t just implicate privacy rights under the Fourth Amendment. Government spying also affects First Amendment rights because of the chilling effect it has on those who wish to join political, social and religious organizations the government deems worthy of monitoring.

First Amendment claims lie at the heart of a federal lawsuit filed against the NSA by the San Francisco-based Electronic Frontier Foundation. The case is one of five major legal challenges to the NSA pending across the country. The events in Paris could deal them all a significant setback, as lawmakers and judges alike yield to arguments that more, not less, surveillance is needed to wage the unending war on terror.

5. Silencing Prisoners: The United States is home to 5 percent of the world’s people, but we have 25 percent of the world’s prison population. Yet we don’t just lock up our convicts; we also try to shut them up. Both the federal government and some 40 states have enacted some form of statute patterned after New York’s “Son of Sam” law, named after the moniker used by 1970s serial killer David Berkowitz, to prevent prisoners from profiting from their violent crimes by writing books or selling the rights to their stories.

Although the original Son of Sam law was invalidated by the Supreme Court in 1985, such laws haven’t gone away. The worst of the current crop is Pennsylvania’s “Revictimization Relief Act,” passed in October specifically to silence former Black Panther and journalist Mumia Abu-Jamal, who is serving a life term on charges of killing a police officer in 1982.

Abu-Jamal enraged state authorities after he delivered a pretaped commencement speech in October to the graduates of Vermont’s Goddard College. Under the new law, in terms that would bring smiles to the faces of any jihadist, victims of violent crime who experience “mental anguish” can sue to enjoin prisoners and released convicts from engaging in any “conduct [including uncompensated speech] which perpetuates the continuing effect of the crime on the victim.” Abu-Jamal is trying to overturn the law in federal court, along with four other inmates and the Prison Radio Network, which distributes his political commentaries.

No doubt there are other items—attacks on academic freedom and curbs on street demonstrations and the Occupy movement, for example—that could be included in my top five.

The important thing is not to construct an exhaustive list, but to underscore the point that freedom of speech is not just under assault in Paris by Muslim fanatics. It rests on a tenuous foundation here as well, in the very home of the First Amendment.

(Bill Blum is a former judge and death penalty defense attorney. He is the author of three legal thrillers published by Penguin/Putnam (“Prejudicial Error,” “The Last Appeal” and “The Face of Justice”) and is a contributing writer for California Lawyer magazine. This column appeared first at the excellent truthdig.com)