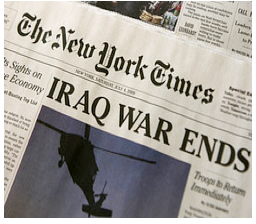 TRUTHDIG-I have never been much of a fan of the journalistic self-examination practiced by folks identified as "ombudsman" or "public editor." I changed my mind Sunday, and I’ll get to that in a minute.

The idea, more than 30 years old now, was all goody-gooey and well-intentioned: A news organization would assign a staffer or hire an outside luminary to criticize its own coverage. Perhaps it was a good idea at the time, and some impressive friends of mine took over the jobs.

But, sad to say, the jobs usually turned into defenses of those newspapers or television and radio operations, or into platforms to answer letters to the editor. A lot of the copy meant something to ink-stained wretches like me, but I can’t imagine that ordinary readers could always figure out the jargon about what was going on inside those big buildings. There were exceptions, notably, in my mind, Michael Getler, who had the job for five years at The Washington Post and is still doing it for PBS.

New technologies have given ordinary citizens and some not-so-ordinary citizens—Andrew Sullivan for one—a way to get their opinions and viewpoints into the public discussion. But as good as some of the new stuff is, the winds of change cannot compete with the big wind from New York, my alma mater, The New York Times.

So, last Sunday: Margaret Sullivan, former editor of The Buffalo News, is the current public editor of the Times. The Great Grey Lady—the paper, not Ms. Sullivan—created the position after one of its reporters, Jayson Blair, was exposed in 2003 as a plagiarist and all-around serial liar. (He is now, by the way, working as a "life coach.")

But Blair was not the worst thing that happened in my time in journalism by any means. The worst was the run-up to the United States’ invasion of Iraq in that same year. The Times took the journalistic lead in channeling the belligerent voices of a few crazed and stupid government officials and "public intellectuals," neo-conservatives, who wanted young Americans to fight and die in a war that made no sense then—or now.

To put the best spin on it I can, because I love the Times and some of the people involved: Officials, led by Vice President Richard Cheney, lied to Times reporters, especially Judith Miller, and those officials used their own fabricated stories to take us to war.

Public Editor Sullivan had the sense and guts to write about that last Sunday, saying, in part:

"The lead-up to the war in Iraq in 2003 was not the Times’ finest hour. Some of the news reporting was flawed, driven by outside agendas and lacking in needed skepticism. Many op-ed columns promoted the idea of a war that turned out to be both unfounded and disastrous. ...

"Given the Times’ troubled history when it comes to this subject, readers have good reason to be wary about what appears in the paper about military intervention in Iraq. ... Many readers have complained to me that the Times is amplifying the voices of hawkish neoconservatives and serving as a megaphone for anonymously sourced administration leaks, while failing to give voice to those who oppose intervention. ... On the op-ed pages and in the news columns, there have been very few outside voices of those who opposed the war last time, or those who reject the use of force now."

Sullivan does point out the pros and potential cons that always affect Times coverage and opinion.

The paper has unparalleled access to government leaders. It may be the best newspaper in the world, it may try like hell to avoid being used by people in power, but there is a reason that many people outside the United States consider it the official voice of the United States.

That power, which is very real, is the reason Sullivan’s candor is so important right now. She ends: "I hope that the editors ... will think hard about whose voices and views will get the amplification that comes with being in the Times."

I hope so, too. Nice job, Public Editor.

(Richard Reeves, senior lecturer at the Annenberg School for Communication at the University of Southern California, is an author and syndicated columnist whose column has appeared in more than 100 newspapers since 1979. He has received dozens of awards for his work in print, television and film. He also posts at truthdig.com where this column first appeared. Visit truthdig.org for other prominent writers like Robert Scheer, Amy Goodman and Chris Hedges.)