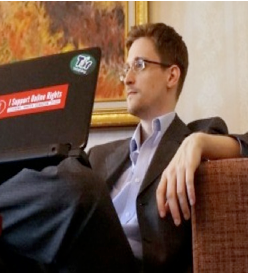 TRACKING EDWARD SNOWDEN-Taking a break from being a sometimes mouthpiece for the National Security Agency or acting in a too deferential manner towards government claims, the New York Times Editorial Board on Tuesday took a strikingly clear position on the case of former intelligence contractor Edward Snowden by declaring his leaks of internal NSA documents the act of a "whistle-blower" and called on the United States to offer him "a plea bargain or some form of clemency that would allow him to return home" without the threat of decades or life in prison.

"Considering the enormous value of the information he has revealed, and the abuses he has exposed, Mr. Snowden deserves better than a life of permanent exile, fear and flight," the editorial states. "He may have committed a crime to do so, but he has done his country a great service."

Though progressive supporters have considered Snowden a whistleblower from the outset—an argument his defenders see bolstered by each successive revelation—the weight of the New York Times Editorial Board makes the development significant in terms of wider public opinion and in the halls of more elite power where the paper holds sway.

To defend its call for clemency or a plea agreement, the Times argues that "Mr. Snowden was clearly justified in believing that the only way to blow the whistle on this kind of intelligence-gathering was to expose it to the public" and cataloged "just a few" of the violations by the NSA his revelations brought to light and some of the legal challenges they've already provoked:

■ The N.S.A. broke federal privacy laws, or exceeded its authority, thousands of times per year, according to the agency’s own internal auditor.

■ The agency broke into the communications links of major data centers around the world, allowing it to spy on hundreds of millions of user accounts and infuriating the Internet companies that own the centers. Many of those companies are now scrambling to install systems that the N.S.A. cannot yet penetrate.

■ The N.S.A. systematically undermined the basic encryption systems of the Internet, making it impossible to know if sensitive banking or medical data is truly private, damaging businesses that depended on this trust.

■ His leaks revealed that James Clapper Jr., the director of national intelligence, lied to Congress when testifying in March that the N.S.A. was not collecting data on millions of Americans. (There has been no discussion of punishment for that lie.)

■ The Foreign Intelligence Surveillance Court rebuked the N.S.A. for repeatedly providing misleading information about its surveillance practices, according to a ruling made public because of the Snowden documents. One of the practices violated the Constitution, according to the chief judge of the court.

■ A federal district judge ruled earlier this month that the phone-records-collection program probably violates the Fourth Amendment of the Constitution. He called the program “almost Orwellian” and said there was no evidence that it stopped any imminent act of terror.

Additionally, the Times editorial recognizes those critics who charge Snowden with woefully damaging U.S. interests by revealing some of these tactics, but points out that none of these critics—either inside of outside of government—have "presented the slightest proof that his disclosures really hurt the nation’s security."

Glenn Greenwald, one of the journalists who has worked most closely with Snowden and publicly defended the whistleblower's actions since his name entered the public domain, called the Times editorial "remarkable."

The Nation's Greg Mitchell, who has followed the Snowden case closely, including the way it’s been handled by U.S. media, began his review of the Times editorial by admitting: "Well, I didn't see this coming."

(Jon Queally is staff writer for CommonDreams.org  … where this article was first posted.)