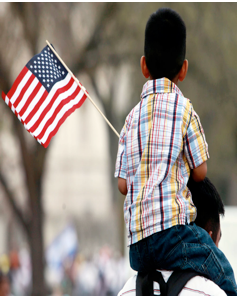 THE VIEW FROM HERE - My interest in immigration probably began when I heard of my grandparents’ entry into the United States in the late 1890’s from Russian/Poland and Hungary/Romania.  I learned a little bit from them of the difficult, but promising “middle” passage across the Atlantic until their arrival at Ellis Island, a temporary destination, after having first skirted the other island, bearing that beautiful, majestic, welcoming Statue of Liberty.

What transpired at Ellis Island is not at all what has been glamorized and romanticized over the years—the reception was often unfriendly—peoples’ names were changed, people lost their identities (especially the children), many were turned back because of illness or political affiliation--back to a mother country only to be imprisoned, tortured, or to die as a result of the very repression they had been trying to escape in the first place.  Nevertheless, they were here and felt blessed to be in America!

As a young person, I moved around a lot—nine schools in nine years, never once attending anything but an all-white school.  I should be embarrassed to admit that at the time I never noticed the absence of other ethnicities, the lack of diversity (although I was the only Jew and frequently became the target of anti-Semitic attacks).  That is just the way it was; I didn’t understand the difference.

Later, however, as a teacher, I refused to take any school position that did not provide a well-integrated place for education.  Diversity in the classroom, I now gratefully recognize, brings a richness that cannot otherwise occur there.  That is what I believe and that is what I taught.

In high school I took buses from my white neighborhood to a Black neighborhood where, during  the evenings and on weekends, I was employed at a discount store, White Front (which long since has gone out of business).  It was during the summer of 1965 that I witnessed first-hand the Watts Riot as armed soldiers and police contingents whizzed down the streets, cordoning off the affected area in a quarantine.  My store was located on the borderline, just barely in the “free” zone.  It was a scary time with mixed results.  More about that another time.

I skip ahead to when I met and interacted with the famous former priest, Blase Bonpane (now director of the Office of the Americas).  He visited Cuba, Mexico, Central and South America, preaching a Liberation Theology—inspired by social, political, and economic injustice.  He taught and continues to teach a philosophy by which you have the RIGHT to live well and free NOW and not have to wait for the afterlife (as our own slaves were repeatedly told)!

Then I encountered representatives from WOLA (Washington Office on Latin America)  and was asked to spread the word to encourage legislation on many issues:  among them, the right for travel to and from Cuba; student exchange programs that not only provide education but help to create a better understanding  of cultural differences and similarities; encouragement for business to expand abroad in both directions in order to boost mutual economies, which, by the way, would reduce the “necessity” for illegal immigration; and legislation that would  create a fair pathway to citizenship for the undocumented, most of whom have come to our shores seeking a better life for themselves and especially for their children.

Keep in mind, as well, that 40% of our undocumented come from all over the world for the very same reasons that Latin Americans do.

While teaching, I heard countless stories, often horrifying ones, about what life is like living in the shadows:  students worrying that when they return home after school, they will find no parents there because those parents had been taken off the streets by ICE and “disappeared.”  They feared for their own safety as well.

They have parents who have four jobs between them, a reality that often does not earn them enough to cover expenses.  Thus, older children have to stay home to babysit the younger ones or have to drop out of school altogether in order to get a job to help pay the bills.  What a loss!  So many of these promising young people will just not have a reasonable chance at opportunities unless significant changes are made.  The more education  these immigrants have, the more money they can earn, the more taxes they will pay, the more purchases they will make, the less crime we shall have—all the better for themselves and the greater community.

Regardless of circumstances, the undocumented pay taxes every day--certainly sales and gasoline-- but often State and Federal, but (in most cases) they cannot claim benefits from them the way citizens do, “legals” who too often take these benefits for granted.  This is like “taxation without representation”—wasn’t that the catalyst that drove the American Revolution?

Neither can these undocumented taxpayers vote or sit on juries; they can’t openly participate in community governance because of their status—even if they have never broken a single law, lived here for years, and become role models.

Remember the movie, A Day without a Mexican?  Not seen by enough theatre-goers, unfortunately, but, nevertheless, with a timely message:  Are we really contemplating ridding ourselves outright of the 12 million undocumenteds that are already here?  Our very economy does, in fact, greatly depend on the work they do for us!

Many have cars to go to work or school but have no licenses.  That doesn’t make sense to me:  If people are going to drive anyway, shouldn’t they know the laws and pass behind-the-wheel tests to make us all safer on the roads?

And when they are sick but uninsured, they have to use hospital emergency rooms as their primary source for care.   Many people think such patients are straining the medical system as a result.  The truth is that the citizen-poor are the ones who utilize these facilities the most.  Why don’t the undocumented take greater advantage of the health system?  If you are undocumented, you shy away from any place that might identify you as such and report you to the authorities.

And who pays for all this?  The taxpayers, of course.  We need to change the health-care system (glory to the Affordable Care Act), so that the burden is not on the taxpayers.

Many of the people at the heart of this discussion wait too long to get care, often in the meantime spreading communicable health problems, like the flu or measles or pneumonia.  Many become so severely ill that their ultimate care becomes exorbitantly costly, much more than it would otherwise have to be if only such patients had been able to take preventive, prophylactic measures or early treatment.  Many people die quietly—unnoticed by any except their families—deaths that could have been avoided had their status been different.

Moreover, immigration reform would boost our economy by about 1.4 trillion dollars.  Statistics already demonstrate that the undocumented have helped to grow the economy in substantial ways.  Should legalization occur (after which they can emerge from the shadows), they can finish school, become blue and white collar workers, build businesses (and hire others), and create or invest in new technologies and other programs—all of which will have an enormously positive impact on our stressed but slowly growing economy.

The emergence of green-card residents can shift the paradigm.  Instead of a sizeable amount of the budget being allocated for ICE and ISN “services,” legislation can redirect funding to pay for new jobs (perhaps green jobs), work on infrastructure (such as bridges, transportation, roads), education, community development, and so on.

We should ask ourselves why did 60% of our undocumenteds come here in the first place.  Remember NAFTA?  At the time, I went along with Bill Clinton’s rationale for signing it.  It was supposed to help our trading partners to prosper and grow their own economies, thus reducing the need for the poor and undereducated to come here in the first place.  But NAFTA didn’t work out as designed.  It was an ideal whose time had not come, and we are living with the unsustainable consequences.

What will work is a rational, just pathway that is fair for those who entered legally and compassionate for those who did not.  We must lift the burden of uncertainty from our Dreamers.  People who continuously squawk about border security first (why not with Canada as well?) are barking up the wrong tree.  They are employing a shibboleth to distract from the real issues.  In fact, there has been net zero illegal entries into this country for quite some time, making serious consideration of the border question a moot point.

The Immigration Rally on a recent Saturday at Magic Mountain was a co-mixture of sign holding and horns blowing—an enthusiastic response on a Labor Day weekend to immigration reform. The event was well-attended by an enthusiastic, committed crowd—an array of demonstrators who know in their hearts what is the righteous action that needs to be taken.  It brought into prominent relief just why I have for so long supported the vision that inspired it.  It reinforced the belief I have always held on this issue.  I hope it presages a good outcome—hopefully before the end of the year or at least before the conclusion of President Obama’s Administration.

So you see, there is a litany of reasons to support immigration reform.  Yet if we disregard most of what I have said above, we can still look at this issue from a somewhat self-serving point of view.  If creating a successful pathway stimulates a growing economy, then we won’t have to look at the “other” as a threat anymore (as some do).  If we have jobs and they have jobs, we can all prosper and grow—and social and economic justice can prevail.