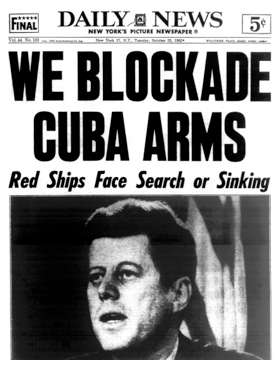 THE VIEW FROM HERE - Lord have mercy, a half-century beyond the Cuban Missile Crisis and almost as many years beyond Vietnam, our erstwhile leaders are still mouthing stale clichés about “credibility.” Remember Dean Rusk saying we went eyeball to eyeball with the Soviets and they blinked? Of course the world almost ended, but never mind.

And to go back a little further into the too-soon-forgotten past, some historians surmise that Truman dropped nuclear bombs on Hiroshima and Nagasaki not to force an already forthcoming Japanese surrender, but to make ourselves more threateningly credible to the expansionist Soviets as the World War II wound down.

Credibility was the main motif of Secretary of State Kerry’s statement rationalizing possible military action against Syria. If we’re going to kill a few thousand non-combatants in the next few days or weeks, and it looks increasingly as if we are, could we not do it for some better reason than maintaining to the world, as if the world cared, that we are not a pitiful helpless giant?

What is it with my country? It is particularly painful to hear these valorous-sounding, but actually exhausted, toothless locutions from John Kerry, who began his political career with electrifyingly refreshing congressional testimony opposing the Vietnam War, a war pursued on the basis that if we did not maintain a credible presence in Southeast Asia, country after country would fall to the Commies, ultimately the Chinese Commies. Meanwhile the historical record of a thousand years showed that China had been Vietnam’s mortal enemy. Never mind.

Only a day before Secretary Kerry’s rationalizations, we listened to our first black president commemorate the 50th anniversary of the March on Washington for Jobs and Freedom. The truth-force of Martin Luther King Jr. seemed to hover above Barack Obama like a tired and angry ghost, because any person with half a brain could feel the cognitive dissonance between the president’s mealy-mouthed obeisance to the mythology of King’s non-violence, and the hellish violence soon to be visited upon Damascus from our cruise missiles. Mr. Obama, Mr. Kerry, surely you cannot have forgotten how steadfastly Reverend King stood against militarism, how he made the connection between inequality at home and the waste of foreign adventures.

Stupid violence because it extends yet further the hatred that so many in the Middle East must feel for our crudely righteous meddling.

Unnecessary violence, because the resolution of the civil war in Syria will not come one whit closer on account of our missiles—even if we kill Assad. There are now too many conflicts folded into the Syrian tangle, the Shia-Sunni conflict, the Iran-Israeli conflict, even the proxy Russian-American conflict.

Hypocritical violence, in view of the U.S. military’s own indiscriminate use of depleted uranium in the Iraq war—and our government’s eagerness to look the other way when Saddam, back when he was our ally, gassed Kurds and Iranians.

Hypocritical violence also because we Americans rationalize our looking to violence as the “solution” to conflict by hiding behind the fig-leaf that gas is so much worse than our other well-trod paths of war-making. It is not gas that is uniquely horrific. It is war itself.

All this being so, there is zero loss of credibility in admitting that there is no military solution to this war, which the world already knows.

When will my country begin to enhance its credibility for “living out the true meaning of its creed”? The worldwide equality of humans, their equal right to life and liberty and happiness, is fundamentally threatened by Orwellian political shibboleths like “credibility,” especially coming from a nation that possesses vast piles of weapons of mass destruction that could make death by Sarin gas look like a family picnic. This kind of credibility is incredible.

The Syrian impasse is horribly difficult, but at least we don’t have to ham-fistedly make it worse.

There are so many creative things we could do besides throwing around our power. First of all, restraint itself can be a creative act, when lack of restraint, such as what we are contemplating, leads nowhere but further into chaos. Don’t just do something, stand there. Or at least stand for credible, consistent values.

Stand against reflexive unilateral military posturing. Stand for the encouragement—and funding—of unarmed U.N. Peacekeeping troops going into Syria in large numbers to create buffer zones between adversaries. Stand for supporting the creation of a parallel Syrian government-in-exile that could make halting steps toward processes of truth and reconciliation when the violence finally exhausts itself. Stand for giving ten times more resources to career diplomats in our State Department, in order that a larger number of people get trained not only in foreign languages and cultures, but also in the arts of diplomatic conflict resolution.

We have forgotten the kind of credibility slowly but steadily built up by Dag Hammarskjold, the second Secretary-General of the U.N., the first person to undertake endless, patient shuttle diplomacy as a better solution than war. Hammarskjold lived a consistent, impartial ethic bent upon steadfastly reconciling the interests of nations with the interests of the human family. Oh that my country could be led by stout hearts like King and Hammarskjold. They were giants of credibility.

(Winslow Myers, the author of “Living Beyond War: A Citizen’s Guide,” serves on the Board of Beyond War, a non-profit educational foundation whose mission is to explore, model and promote the means for humanity to live without war. Myers writes for PeaceVoice. This column was posted most recently at CommonDreams.org)