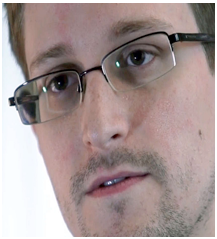 GUEST EDITORIAL - Edward Snowden is a very modern spy – neither gun-blazingly dashing nor cat-strokingly sinister. He is young, tech-savvy, quietly articulate and intensely interested in human rights. His work did not involve high-speed car chases or elaborate gadgets – just a desk and a computer. Using these simple tools he could spy on anyone, anywhere.

There are many people like him, and they are, on his account, potentially frightening figures. "We hack everyone everywhere," he told the Guardian's Glenn Greenwald in the foreign hotel where he has taken refuge. "I had the authorities to wiretap anyone – you, a federal judge, to even the president if I had a personal email." He describes a "horrifying" infrastructure where he and other analysts could intercept the vast majority of human communications around the world.

And now Edward Snowden has gone and blown it open – literally. He has stepped out of the shadows and revealed himself to be the source of the Guardian's string of recent disclosures of what the National Security Agency has been up to in recent years – some of it ostensibly legal. He asserts that the NSA has routinely misled the people who are supposed to oversee its actions. He is only too aware that he has himself broken the law by going public with his concerns and that the consequences could well be personally extremely uncomfortable. His actions make him a different kind of frightening figure – to those whose methods he is now directly challenging.

The script for what happens next is, in a sense, routine. It is certain that the US government and security agencies will pursue Snowden to the ends of the earth – appropriately, in his case, since he has taken himself off to Hong Kong. But in other ways the usual processes are already wrong. There is no need for a leaks inquiry: the source has outed himself. And Snowden's current location complicates matter immensely for the US administration. He cannot easily be arrested, rendered and kept in solitary confinement – the fate of another young whistleblower, Bradley Manning, currently on trial and facing an eternity in prison. Edward Snowden promises to be a much more complex problem.

It is doubtless futile to suggest that the US government holds off from its pursuit of Snowden. The legal and diplomatic machinery is probably unstoppable. The appropriate authorities will doubtless bear in mind the parallels with the last comparable attempt to prosecute such a high-profile whistleblower – Daniel Ellsberg, leaker of the Pentagon Papers, who also revealed his own actions.

His case, 40 years ago this year, was dismissed on grounds of government misconduct.

But it is not, we hope, ridiculous to suggest that both White House and Congress (and governments abroad, including in Westminster) take an intense interest in what Snowden has to say.

President Obama made much this week of the constitutional oversights of the intelligence infrastructure from both Congress and the courts – even if the secret proceedings of the Foreign Intelligence Surveillance Courts offer limited comfort to the general public. If this oversight is to be at all meaningful members of Congress ought to be seeking the earliest opportunity to learn what Snowden has to say – by video link, if necessary.

Snowden is self-evidently not a common thief. He is more like a conscientious objector. It is not enough for Congress to outsource his interrogation to the FBI. It is vital, above all, that elected representatives test the truth of what he is saying – and not simply the ones who, it seems all too possible, have been asleep while minding the shop.

(This editorial was posted first at The Guardian)