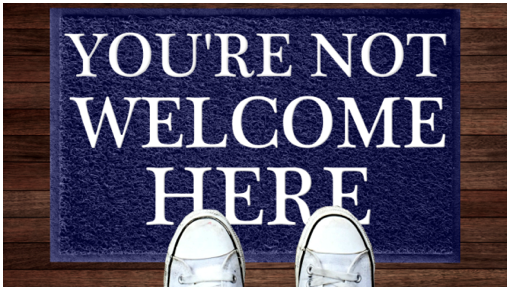 GUEST WORDS--I haven’t stepped foot on a playground in decades, but a recent conversation revived that sinking feeling I used to get every time I was near a dome climber. All the other kids seemed to rise to the top with ease, but I always struggled to make it only halfway up.

Ah, recess -- and childhood. They never failed to remind me that I was just...different.

In the conversation that transported me back to the dome climbers of my youth, I was proposing something to a friend who works for his family’s business in Bangkok, where I’m occasionally based. I made my professional pitch, and his first reaction was encouraging.

“We do that sort of thing all the time,” he said.

Then his expression suddenly shifted. It would never work.

“But my dad hates black people,” he added.

As it turns out, Dad doesn’t just have a general distaste for black. He despises the sight of it -- at least in people. It doesn’t matter if we’re African, West Indian, British or from the U.S. To him, we’re all equally deplorable and untrustworthy. He would never have one of us associated with his company.

I have no idea why he feels this way about black people, especially considering that he’s an Asian man living in Bangkok. How many blacks could he possibly encounter on a regular basis?

My friend may have explained it to me, but I wasn’t really listening anymore. I was too busy trying to get down from that damn dome climber without breaking any bones. Although I played it cool and said I understood, I was shattered on the inside. I didn’t care about the business stuff. It was the rejection, by someone who had never even heard of me.

I was disappointed, not just in a man I’d never met but also, to a lesser though still significant degree, in the one I considered to be my friend. He seemed to have no problem working for an openly racist boss. Dad or not, to me, it was no different than working at a whites-only country club or living in an apartment building that doesn’t allow dogs -- or black people.

Should we tolerate bigotry because the racist in question is our parent? Does racist ideology stop being a deal breaker when it’s being spewed, not by someone from the “alt-right,” or the Ku Klux Klan, but by an otherwise perfectly lovely family member?

Sadly, it wasn’t my first conversation with a friend about a racist relative. It wasn’t the first time a friend basically shrugged it off. Usually, the defense spin is age: “They’re from a different era. They haven’t caught up with the times.” But does that excuse racists in the 1960s? Does that excuse racists in the 1860s? Those were different times, too. I expect more from everyone in 2017. They’ve had decades of progress (and, recently, regression) to sway them and get them caught up.

Once I got off the monkey bars in my head, I wandered over to the seventh-grade lunchroom where a classmate was uninviting me to a mutual friend’s birthday party because the mutual friend didn’t have the guts to do it herself. Apparently, it was going to be a whites-only event. Her parents didn’t want a black kid in their house.

I was disappointed by her lack of bravery, but I didn’t hold her parents’ attitude against her. We were in Kissimmee, Fla., in the ’80s. It wasn’t exactly a hotbed of progressive thought. What was she supposed to do? File for emancipation?

An adult with bigoted parents has more options. Several years ago, I unfriended my favorite aunt on Facebook because she shared something opposing gay marriage after it was legalized in the United States. I couldn’t understand how she could so publicly and cruelly endorse anti-gay rhetoric while having at least two gay nephews.

We’d had our talk after I came out. She was disappointed, but I thought we’d come to an understanding. She’d respect my life and would try to be happy as long as I was happy. When I brought my then-boyfriend to my brother’s wedding, she was cordial, but I could see the disapproval in her eyes. I interpreted the Facebook repost as a spectacularly passive-aggressive way of reminding me how she felt without addressing me directly. I’d been out for years, and I was done justifying who I am.

I made my case in the comments section, letting her know that this time, I was the disappointed one. I knew she wouldn’t respond. I could have scolded her in a private message and asked her, “Why?”, but I didn’t have the energy to take it any further. I was just done. She was out of my life.

She recently sent me a message trying to reconnect. It didn’t include an apology or any evidence of enlightenment. She was doing that thing disapproving relatives often do with younger gay family members. If they ignore the elephant in the room, it’s not there.

But I knew it would always be there. I sent the message to the trash bin. Maybe someday I’ll let her know I didn’t need a sermon about the sanctity of marriage from someone who has been married and divorced multiple times, but for now, my silence says everything I want to say. Sometimes you have to take a stand, even with kin. When something as dangerous as racism or homophobia is involved, you have to be willing to let family reunions be a little uncomfortable.

I’d never dream of making anyone choose between family and me. Still, we all have to choose between right and wrong. I’m not saying that people who make excuses for their racist parents are bad. But if they won’t enforce consequences, they’re just weak-willed accessories to bigotry, complicit in the racism. Move out. Quit the family business. Boycott family events. Do something – anything -- to show them that it’s not OK to hate someone just because that person happens to have been born a certain color.

I didn’t challenge my friend’s unwillingness to challenge his father. I didn’t cut him off or try to talk him out of being the dutiful son. His racist dad was his problem. Thankfully, he wouldn’t be mine. I was just relieved to be off that dome climber, slightly blue but still proudly black.

(Jeremy Helligar is a journalist and author (Is It True What They Say About Black Men?) from NYC. He has spent the past 11 years living, working, and writing on every continent except Antarctica. This piece was first posted on TheRoot.com.) Edited for CityWatch by Linda Abrams.