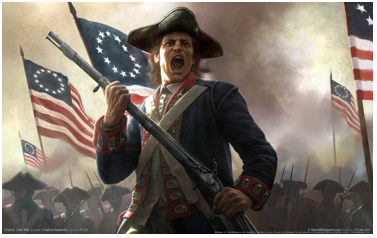 JULY 4, 2017--We keep hearing that the Fourth of July is more than fireworks, barbecues, and the like--but let's get real.  Our exhausting, pressure-filled lives demand time off ... but seriously, despite the rhetoric of Angelenos and other Californians being free-thinking, are we really "independent"?

Seriously, truthfully, God-is-my-witness INDEPENDENT?  Google is hardly the "Word of God", but let's take a look at what happens when you Google the definition of "Independent":

So we're celebrating Independence Day on July 4th because that's the day in 1776 we declared independence from the King of England ... and the Founding Fathers (such as the philosophers Franklin and Jefferson) held life, liberty, and pursuit of happiness as coming from God Himself.
Yet true independence, and the establishment of a United States of America, did not truly exist for several more years of bloodshed and vigorous debate over the Constitution, and what was the role of a central federal government versus local and/or state authority.

... and it's a battle never truly achievable or attainable, and is one that must be fought in every generation.

The colonies-turned states got rid of a King George III of England, and the first President, sworn into office in New York City and who was revered for eight years as a central government was built into an independent, non-state District of Columbia, set the example of stepping down to avoid being America's new "King George".

Fast-forward to 2017.  Are YOU independent, as defined by the definition above, and consistent with the history of the United States?

1) We got rid of a monarch...but how many of us want to establish a new monarchy, complete with royal ministers whose word is final, in either Washington or Sacramento, or Downtown LA?

2) We demanded freedom of speech ... but how many of us want to make it illegal, and punishable by jail, for saying certain things (more than just merely losing one's job or friends)?

3) We fought for an Independent Media … but how many of us want to allow the Media to determine what we feel and think, and who is to rescue us from the Media when they blur the lines between reporting and editorializing?  And is having both liberal and conservative media outlets a bad thing, or a good thing, for Independent Thought?

4) We fought with both blood and money to escape foreign domination...but how many of us want to submit to the will of foreign agendas--including those who proclaim they are trying to save us all?

5) We fought for religious freedom ... but how many of us revile Judaism, Christianity, and other major religions, and demand they be kept tightly behind closed doors, and privately if not publicly view others practicing them with the greatest of contempt?

6) We started with the presumption that freedom and independence came from our Creator, God Himself...but how many of us despise the concept of a God, and view those who believe in a God as childish, ignorant barbarians?

7) We wanted only the right to pursue happiness, and not be entitled to happiness...but how many of us have decided that THEY know what we need to be happy, and that THEY will write, implement, and enforce whatever laws THEY know are needed so that we can all be happy?

8) We wanted and demanded the independence and freedoms accorded to American citizens, with the concept of a citizenry gradually expanded to include both genders and all ethnicities...but how many of us want to expand the list of rights without demanding a balance of responsibilities as well?

9) We never let up with the drive to expand rights and the pursuit of happiness to all individuals...but how many of those who fought the sacred battles for civil rights turned their praiseworthy pursuits into "movements" and growth industries for their personal egos and material enrichment?

10) We learned that "life, liberty, and the pursuit of happiness" were good things as children and young adults...but how many of us have decided that those deriving these goals were primitive and inferior to our current, enlightened intelligentsia?

So...we're now "Independent" on Independence Day.  But are YOU as independent as you always wished you could have been?

Hopefully, the answer is "yes".  But for most of us, that goal is elusive and always off in the distance.
Fortunately, the pursuit of independence, if not outright liberty and happiness, is always there for the taking if we simply make the choice to do so.

Happy July Fourth and here's to a new year of renewed Independence!

(Kenneth S. Alpern, M.D. is a dermatologist who has served in clinics in Los Angeles, Orange, and Riverside Counties, and is a proud father and husband to two cherished children and a wonderful wife. He is also a Westside Village Zone Director and Board member of the Mar Vista Community Council (MVCC), previously co-chaired its Planning and Outreach Committees, and currently is Co-Chair of its MVCC Transportation/Infrastructure Committee. He was co-chair of the CD11 Transportation Advisory Committee and chaired the nonprofit Transit Coalition, and can be reached at alpern@marvista.org. He also co-chairs the grassroots Friends of the Green Line at www.fogl.us . The views expressed in this article are solely those of Dr. Alpern.)