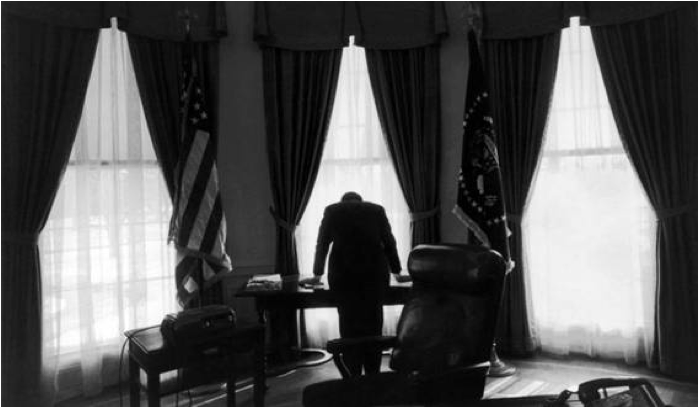 ALPERN AT LARGE--If ever there was a justification for the mortality of a man, it would be the frightening example of Fidel Castro.  Two other examples would be Josef Stalin and Mao Tze-Tung.

(Photo above: President Kennedy silhouetted in his office during the Cuban Missile Crisis.)

There are those who would lionize Fidel, his revolutionary export of Che Guevara and the bloodletting Guevara caused and their fight for the "people", and their revolutionary zeal against the excesses of capitalism...but while they lived most of their lives in luxury, millions suffered, were tortured, were starved, were unfairly imprisoned and were slain as a result of their "enlightened" cause.

So with the understanding that Millennials, much to the horror of their parents, often graduate high school (and college) with an understanding of U.S. History that stops at the American Civil War, I have and will continue to throw out occasional quizzes of the 20th Century and of history/civics-related issues.  Because the 20th Century ... and all of its painful lessons ... DID happen.

THE ALPERN 20TH CENTURY QUIZ—HOW MUCH DO YOU KNOW/REMEMBER?

(Correct answers at bottom of this column)

1) Fidel Castro allowed which nation to place nuclear missiles on its territory, and the Cuban Missile Crisis was responded to by which President in what was arguably the closest thing to World War III that ever occurred during the Cold War:

2) Fidel Castro vigorously opposed what he referred to as American Imperialism, and sent Cuban soldiers to unsuccessfully fight wars or to establish Marxist governments that were subsequently either overthrown or defeated by his opponents EXCEPT:

3) Fidel Castro, after almost succumbing to a gastrointestinal ailment (possibly diverticulitis with bleeding) in 2008, handed over the reigns of power in Cuba to:

4) The unsuccessful U.S.-backed attempt to militarily overthrow Fidel Castro in 1961 was called, and was supported by which U.S. President:

5) Prison work camps known as "Military Units to Aid Production" were created by Fidel Castro's younger brother Raul, and those sent there without trial for torture and threatened execution included:

6) The late communist dictator Mao Tse-Tung is credited with the deaths of approximately how many Chinese through execution, war, forced or war-associated starvation, or imprisonment?

7) Which of the following socialist/communist nations allowed/allows freedom of religion?

8) The late communist dictator Josef Stalin is credited with the deaths of approximately how many Russians and other Soviets through execution, war, forced or war-associated starvation, or imprisonment?

9) The English translation of the former Nazi Party of Germany before and during World War II is:

10) Che Guevara, who is believed to have personally or indirectly killed thousands of men, women and children both in Cuba and in nations throughout Latin America and Africa, was executed in which nation?

It's likely that many, like Florida Senator Marco Rubio (Republican, of Cuban descent) are noting that Fidel Castro is finally meeting his maker, and are wondering if his soul now suffers the same fate as his soon-to-be-cremated body (after the week or more of "mandatory mourning" of course).

It's also likely that New Jersey Senator Bob Menendez (Democrat, of Cuban descent) isn't the only one wondering if Raul Castro will be any better than his older brother, now that he is control, with respect to human rights, civil liberties, and democracy in Cuba.

But one thing is truly likely:  if anyone wants to throw around the idea, or wear a Che or Fidel t-shirt, espousing the wonderful "revolution" of Cuban socialism in front of a person of Cuban descent whose family fled Cuba, and braved death and overcame persecution in order to do it, then that person should expect a verbal rebuke of the harshest sort, or maybe even a punch in the nose.

And that person will have richly deserved and earned that rebuke or punch in the nose.

Because the Twentieth Century, and all of its horrific disasters (most especially Socialism) DID happen.

(Kenneth S. Alpern, M.D. is a dermatologist who has served in clinics in Los Angeles, Orange, and Riverside Counties.  He is also a Westside Village Zone Director and Board member of the Mar Vista Community Council (MVCC), previously co-chaired its Planning and Outreach Committees, and currently is Co-Chair of its MVCC Transportation/Infrastructure Committee. He is co-chair of the CD11Transportation Advisory Committee and chairs the nonprofit Transit Coalition, and can be reached at  alpern@marvista.org. He also co-chairs the grassroots Friends of the Green Line at www.fogl.us. The views expressed in this article are solely those of Dr. Alpern.)

Why are Local and State Officials Leading LA and California into the Abyss?