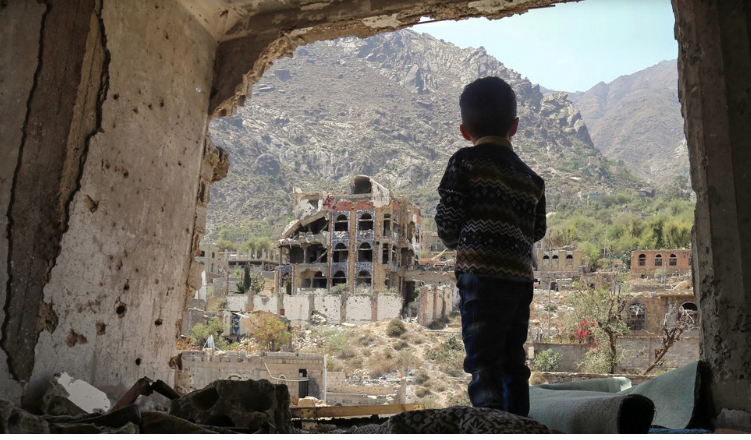 "The United Kingdom," announced Oppenheim, "stands with the people of Ukraine in the face of Russia's unprovoked attack on freedom and democracy."

The British ambassador in Yemen is right to condemn Russia's illegal invasion of Ukraine. But it cannot be forgotten that Britain is a core part of Saudi Arabia's barbaric killing machine in Yemen.

The hypocrisy is grotesque even for those accustomed to the notorious duplicity of the British diplomatic service. Oppenheim may carry the title of British ambassador to Yemen, but he actually is not in Yemen at all.

He's based in the Saudi capital of Riyadh, where his main task—judging by his active social media account—is to echo Saudi talking points in its vicious and brutal war on the Yemeni people.

Britain has not simply stood aside. More than any other country, the United Kingdom has facilitated Saudi Arabia's war.

We provide Saudi Arabia with arms and military advice, give moral support and, through the UN Security Council (where Britain is penholder) essential diplomatic protection—above all by blocking the establishment of an international independent investigative mechanism to examine war crimes committed in the conflict.

Britain has, in short, become Saudi Arabia's proxy on the international stage as it pummels Yemen in a war in which approximately 230,000 have died as a direct result of the Saudi bombardment and thanks to the wider humanitarian consequences of its economic siege of the country.

But Ukraine will make matters worse by driving up food prices, as the UN World Food programme warned on Thursday. WFP executive director David Beasley said in the statement: "We have no choice but to take food from the hungry to feed the starving and, unless we receive immediate funding, in a few weeks we risk not even being able to feed the starving."

Two standards have been applied. Rush to help Ukraine against the foreign invader. Leave Yemenis to rot.

Of course the situation in Ukraine is grotesque. But the horror and the suffering cannot be compared to Yemen, defined by the United Nations as the greatest humanitarian calamity of the 21st century.

It's not just diplomats who have applied these double standards. Ever since Vladimir Putin made his move almost a week ago media commentators have been making it explicitly clear that white Europeans in Ukraine matter while others don't. Hence the reporter from the legendary United States CBS news service who explained that: "This is not Iraq or Syria, this is a civilized and European country."

On Monday, Samantha Power, the administrator of the US Agency for International Development ( USAID), descended on the Polish border on a mission to help Ukrainian refugees.

Writer Sarah Lazare has noted that "when Power in her role as a UN ambassador actually had the power to help stop the war on Yemen, by publicly breaking with her boss and encouraging meaningful action at the United Nations, she did nothing. Instead she embraced a policy of silence  —and shielded the US-Saudi coalition from meaningful international scrutiny as it dropped bombs on homes, schools, hospitals and funerals."

Power was US ambassador to the United Nations when the Yemen war flared up in 2015. I don't recall any mercy missions from Power to Yemen. Or to Gaza, or Syria, or Myanmar for that matter.

When, inshallah, the dust settles in Ukraine, we should turn our attention to our own double standards.

Let's take a look at the confused world of Tory MP and former minister Tobias Elwood, who has been urgently calling for enhanced Nato intervention in support of Ukraine.

Seven years ago, Elwood, then a British defence minister, was obliged to correct the record after ministers repeatedly misled Parliament about the obscene use of British-made cluster bombs by Saudi Arabian forces in Yemen.

None of this means that the West is wrong to be deeply concerned about Russian savagery in Ukraine. But when, inshallah, the dust settles in Ukraine, we should turn our attention to our own double standards.

The same applies to social media. As MEE reported on Monday, old footage of Ahed Tamimi, a Palestinian girl who was arrested in 2017—she was 16 years old at the time—by Israel after she confronted an Israeli soldier, has been redeployed. A TikTok clip of Tamimi from 2012 when she was 11, falsely claiming that she is a Ukrainian girl standing up to a Russian soldier, has been shared 12 million times.

Back home on the occupied West Bank, Tamimi was sent to jail for eight months amidst boredom and indifference from the West. Reinvented as a member of the Ukrainian resistance to Russian oppression, it's another story altogether.

As Chris Doyle, director of the Council for Anglo Arab Understanding, told me, "Palestinians notice in the case of Russia the world has rushed to impose sanctions, kick them out of cultural events and to divest in the face of occupation. But when Palestinians call for boycott and divestment in the face of the Israeli occupation they are labelled antisemitic to the extent that the British government is trying to criminalise it."

Or let's call it out for what it is: the blatant racism of the West.

It is a delight that the United States, Britain, and Europe have rediscovered the importance of international law. The test now is to ensure that it is applied consistently across the globe—and not only in response to Russian aggression inside Europe.

(Peter Oborne is the former chief political commentator of the Telegraph and reports for Channel 4's Dispatches and Unreported World. He has written a number of books identifying the power structures that lurk behind political discourse, including The Triumph of the Political Class. He is a regular on BBC programs Any Questions and Question Timeand often presents Week in Westminster. He was voted Columnist of the Year at the Press Awards in 2013. This article was distributed by Common Dreams.)