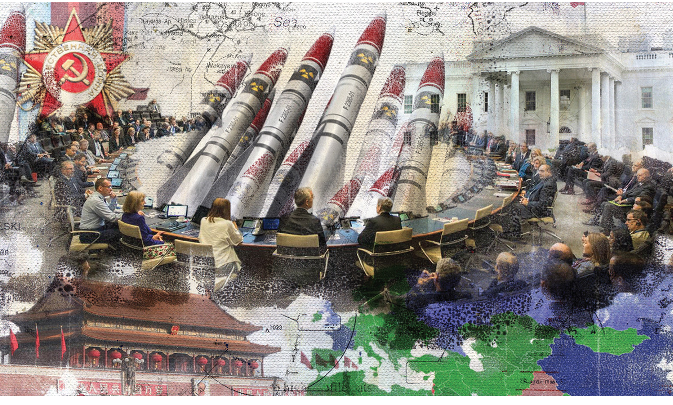 GUEST WORDS - Somewhere out there in the geopolitical wilderness of Eastern Europe, two powerful beasts stalk each other. One of them is good. One of them is evil. The future of all life on this planet is at stake.

This seems to be the context in which the spectator public gets the details about the re-emerging Cold War, suddenly back from the dead, and the nuclear brinkmanship that comes with it.

Will Russia invade Ukraine? Such an act, according to President Biden, would be “the most consequential thing that’s happened in the world in terms of war and peace since World War II.”

Wow. Only we get to invade countries, apparently.

As I ponder the news — or the pseudo-news — about the Ukraine standoff, I sense an enormous void where there should be sanity. Humanity has not yet united as a single entity and remains split into various “interests,” which are unable, or unwilling, to envision a future beyond the next war. There is no organized force on this planet that stands for peace that has anywhere near the empowerment of militarized, corporate nationalism, which stands for victory.

Pope Francis prays for peace — leads the world in prayer — and hopes this global longing will reach the hearts and minds of world leaders “so that dialogue may prevail.” And the Vatican’s foreign minister, Archbishop Paul Gallagher, laments that “those who suffer the most from conflicts are not those who decide to start them but above all the unarmed victims.”

But as Ann Wright points out: “U.S. politicians, think-tank pundits and government war makers have created a war atmosphere on many fronts.” Thus, the possibility of war resonates amid every conflict and “dialogue” is, at best, grudging, stopping short of actual consideration of the enemy’s point of view. Us vs. them! Now salute the flag. And the mainstream media plays along.

Thus the New York Times story, which is headlined “Can the West Stop Russia From Invading Ukraine?” begins:

“It feels like a scene from the Cold War.

“An unpredictable Russian president amassing thousands of troops on the border of a neighboring country, Ukraine. The threat of invasion. A possible bloody conflagration between East and West.”

Journalism purports to be the putting forth of facts, but that’s only a small part of the process. Every news story ever written does something else first: It creates the context in which the reported facts can be understood. And so the simplistic context the Times has just manufactured is focused solely on the behavior of Russia and the nuclear-armed unpredictability of Vladimir Putin. Completely missing from this context is the behavior of Russia’s adversaries and the likelihood that they are connected, beginning with the West’s broken promise of 1990.

As the Soviet Union was in the process of collapsing and turning back into mere Russia, then-Secretary of State James Baker assured the Soviets that NATO would not expand “one inch to the East.’” Instead, of course, “NATO has expanded to include numerous countries, including some that border Russia,” according to a statement to Biden endorsed by 105 progressive organizations.

“Hidden in plain sight, the extreme hypocrisy of the U.S. position on NATO and Ukraine cries out for journalistic coverage and open debate in the USA’s major media outlets. But those outlets, with rare exceptions, have gone into virtually Orwellian mode, only allowing elaboration on the theme of America good, Russia bad. . . .

“Imagine if a powerful Russian-led military alliance were asserting the right to be joined by its ally Mexico — and in the meantime was shipping big batches of weapons to that country — can you imagine the response from Washington? Yet we’re supposed to believe that it’s fine for the U.S.-led NATO alliance to assert that it has the prerogative to grant membership to Ukraine — and in the meantime is now shipping large quantities of weaponry to that country.”

This brings up another significant hole in the context presented by the New York Times: the U.S.-supported 2014 coup in Ukraine that ousted President Viktor Yanukovich and that fact that the U.S. has given $2 billion in military aid to the country since then, with President Biden recently adding “another $650 million to that, along with deployments of U.S. and NATO military trainers,” according to Medea Benjamin And Nicolas J.S.Davies.

War has become possible between Russia and the United States! This is a profoundly dangerous situation, as we all know. No one wants such a war, but . . .

The planet remains caught in a paradox beyond all comprehension. The two countries, combined, possess about 11,000 nuclear weapons. Would they ever use one or two or a dozen of them?

“We affirm that a nuclear war cannot be won and must never be fought.”

So begins the Joint Statement of the Leaders of the Five Nuclear-Weapon States on Preventing Nuclear War and Avoiding Arms Races (which also includes China, France and the U.K.). This sounds pretty clear until you read further:

“As nuclear use would have far-reaching consequences, we also affirm that nuclear weapons — for as long as they continue to exist — should serve defensive purposes, deter aggression, and prevent war. We believe strongly that the further spread of such weapons must be prevented.”

There is a paradox here the size of the whole planet. The essential point here, as far as I can tell, is that the signatories are confessing that, yes, we possess the weapons that could destroy all life, and yes, we think using them would be wrong, but we have no idea how to make them go away and so we’ll just use them to scare each other, a.k.a., serve defensive purposes. But that of course means we will pretend that we would use them if necessary. If one of us should invade Ukraine, for instance.

(Robert Koehler([email protected]), syndicated by PeaceVoice, is a Chicago award-winning journalist and editor. He is the author of Courage Grows Strong at the Wound.)