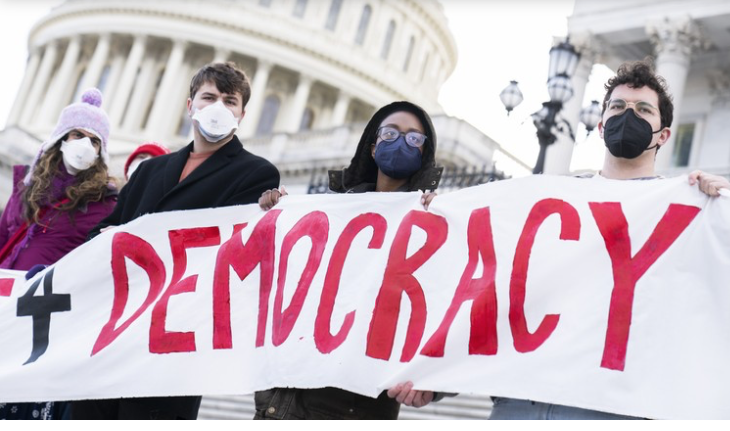 STATE OF OUR UNION - Can America be a democracy if a minority writes the rules to entrench minority rule?

Last week, Senate Republicans invoking the cause of “states’ rights” united in a filibuster to block democratic reforms, including the effort to revive the Voting Rights Act. They were empowered to do so by the decision of two wayward Democratic senators — Joe Manchin of West Virginia and Kyrsten Sinema of Arizona — to protect the filibuster, choosing obstruction over reforms they claim to support. The 50 Republicans voting against reform represent 41 million fewer voters than the 50 Democrats who support reform.

For African Americans, the Republican commitment to rig the rules for the minority is particularly ominous. “States’ rights” was the cover story used by the Southern plantation class after the Civil War to suppress the Black vote and impose apartheid — legal segregation — on the South. Today, “states’ rights” is used to justify systematic Republican efforts to make it harder to vote, particularly in urban areas with high numbers of Blacks and other people of color.

For African Americans, freedom, citizenship and the right to vote are inextricably linked. With the victory of the Union in the Civil War, the 13th, 14th and 15th amendments were passed — freeing the slaves, requiring equal protection under the law, and protecting the right to vote. Those rights were trampled by segregation. It took 100 years and the civil rights movement to end segregation and pass the Voting Rights Act.

Now we witness a reaction once more as Republicans seek to suppress the vote. Once more they invoke states’ rights to oppose federal efforts to protect this basic right.

The question now is what can be done about it. This is not a time for the wringing of hands, for giving up. It is a time to act.

These laws are on the books. It is time to set up a special task force to ensure that they are enforced.

But judicial action is not sufficient. In the end, we won the right to vote — and passed the Voting Rights Act in 1965 — not because the Constitution demanded it, or the courts ordered it.

We won because people marched, demonstrated, and risked their lives to demand the right to vote. The Voting Rights Act was passed in the halls of Congress in Washington, D.C., but it was won on the bridge in Selma, Alabama. Lyndon Johnson and Congress were reacting to a demand that could no longer be ignored.

We need street heat. Manchin struts around Washington rationalizing his vote against support for families with children, against paid family leave, against lower prescription drug prices, against tuition-free community college. He represents one of the poorest states in the union, in dire need of investment and reform. He needs to be reminded where he comes from — and who he is supposed to represent. We need street heat with a huge march in the streets in West Virginia.

And we need street heat on the anniversary of Selma. Pundits say people don’t care about the right to vote. Republicans, they argue, can filibuster it and pay no price at the polls. To change that, citizens of conscience must mobilize once more — going back to Selma — and then across the 50 states to demand that the right to vote be protected.

The stakes are very high. Minority rule mocks democracy. It is corrosive, undermining the legitimacy of our government. It is destructive, allowing the few to pocket the gold while the many get the shaft. Now is the time for the majority to make their voices heard.

(Jesse Jackson is an African-American civil rights activist and Baptist minister. He was a candidate for the Democratic presidential nomination in 1984 and 1988 and served as shadow senator for the District of Columbia from 1991 to 1997. He was the founder of both entities that merged to form Rainbow/PUSH. This article was distributed by Common Dreams.)